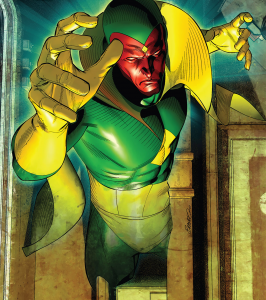 News and updates on highly anticipated Marvel Studios crossover sequel, The Avengers: Age of Ultron has been coming pretty steadily over the past little while, but only now has it been confirmed what many fans suspected; Android superhero, The Vision will appear in the movie, and he’ll be played by… Paul Bettany?

While Bettany has already voiced Tony Stark’s faithful A.I., J.A.R.V.I.S. since the original Iron Man in 2008, it would appear that J.A.R.V.I.S. may be upgraded to a full-blown android body in the Avengers sequel, who will likely become the Marvel Cinematic Universe’s version of Vision.

For those unfamiliar with the character, Vision was originally designed as a powerful minion of the movie’s villain, Ultron, by Ultron himself, but he eventually betrays his master and becomes a hero, being one of the most popular and recurring Avengers team members in the Marvel comics. He is capable of incredible molecular and mass manipulation, indefinite self-sustaining, solar energy projection, flight, immense strength and endurance, and the ability to interface with almost any form of computer technology.

That’s quite the fighter to have on your team!

On perhaps a stranger note, despite being an android, Vision also undertakes a love affair with fellow Avenger, Scarlet Witch in the comics. Elizabeth Olsen is potraying Scarlet Witch in The Avengers: Age of Ultron, albeit without her mutant heritage and relation to X-Men arch-nemesis, Magneto (both the ‘mutant’ term and Magneto are currently owned by Fox in the movie space), and it’s unconfirmed whether this relationship will manifest or at least be hinted at in The Avengers: Age of Ultron.

It was recently confirmed as well that this April’s Captain America: The Winter Soldier will lead directly into the events of The Avengers: Age of Ultron, with the aftermath and setup for the second Avengers movie also heavily influencing future episodes of television series, Agents of S.H.I.E.L.D. after the Captain America sequel comes to theatres. Maybe the show or the movie will start laying the groundwork for J.A.R.V.I.S.’s upgrade? 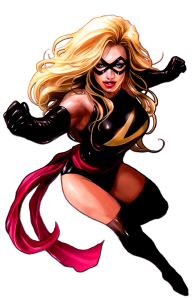 While Vision’s appearance and portrayal is set, there is one apparent last bit of casting that Marvel Studios have been tight-lipped on, with reliable movie scoop site, Latino Review indicating that Ms. Marvel shows up at some point in the Avengers sequel’s script. Another highly popular and recurring Avengers personality in the comics, there have been several female superheroes that have undertaken the mantle of Ms. Marvel in the printed panels, including one reformed super-villain, and the latest incarnation, Kamala Khan being the first-ever Muslim character to headline her own comic book!

Given the complex backstory of the character, it’s likely that, were Ms. Marvel to indeed appear in The Avengers: Age of Ultron, it would likely be the very first and arguably most popular incarnation, Carol Danvers. Danvers was a U.S. Air Force officer working at a top secret base who had her DNA fused with a powerful alien superhero in an explosion, giving her super strength, energy projection and the ability to fly. Because comics. She eventually re-branded herself ‘Captain Marvel’, after the alien superhero that gave her powers, which might have ruffled a few feathers at rival comic maker, DC, given that one of their marquee superheroes was once called Captain Marvel, ironically. Following the full New 52 reboot in their comics however, DC’s Captain Marvel has now been officially renamed, Shazam, after the phrase he shouts to become his superhero alter-ego, so a ‘Captain Marvel’ in a Marvel movie would likely no longer be an issue.

The Avengers: Age of Ultron comes to theatres on May 1st, 2015. It will be preceded by Captain America: The Winter Soldier on April 4th, 2014, and Guardians of the Galaxy on August 1st, 2014.

Eggplante will keep projecting you your news on both The Avengers: Age of Ultron and the Marvel Cinematic Universe at large.