After mumblings around the industry pointed to developer, Rocksteady announcing an all-new entry in the Batman: Arkham franchise this week, exacerbated by Gamestop receiving mysterious banners with the series’ logo, it would appear that this speculation was on the money!

Along with the game’s announcement that we already reported on, Rocksteady has since revealed a considerable amount of information on the upcoming game, which takes place one year after the events of Batman: Arkham City.

Batman: Arkham Knight will feature open-world exploration throughout much of Gotham City, using the power of next-gen hardware to render tens of people on-screen at any one time. While the graphics will undeniably be improved compared to prior entries, Rocksteady is more focused on performance, and rendering more characters on screen with the upgraded hardware. This will lead to more busy and tense combat encounters with many more active thugs in Batman: Arkham Knight, compared to the prior games made for last-gen consoles.

Not only will Batman: Arkham Knight allow players to drive the Batmobile for the first time, but there will even be new Riddler Challenges, as in prior games, and some will incorporate the Batmobile to test players’ driving abilities. The Batmobile will feature its own capabilities and gadgets, including immobilizing missiles, along with the ability to ram through objects and eject Batman into the air. It can also be summoned at any time.

The main villain of the game is apparently Scarecrow, despite rumours earlier this week suggesting it would be Hush, after his tease in a side mission from Batman: Arkham City. Scarecrow has dark designs on all of Gotham City, with The Penguin, Two-Face and Harley Quinn also confirmed to be among the game’s villains, all of whom are present during the pre-rendered reveal trailer. The game’s title also apparently alludes to another villain, a ‘militarized’ version of Batman with the Arkham Asylum-style ‘A’ on his chest. Might this actually be Hush? Perhaps Azrael, another villain teased for an appearance in the sequel during Batman: Arkham City? 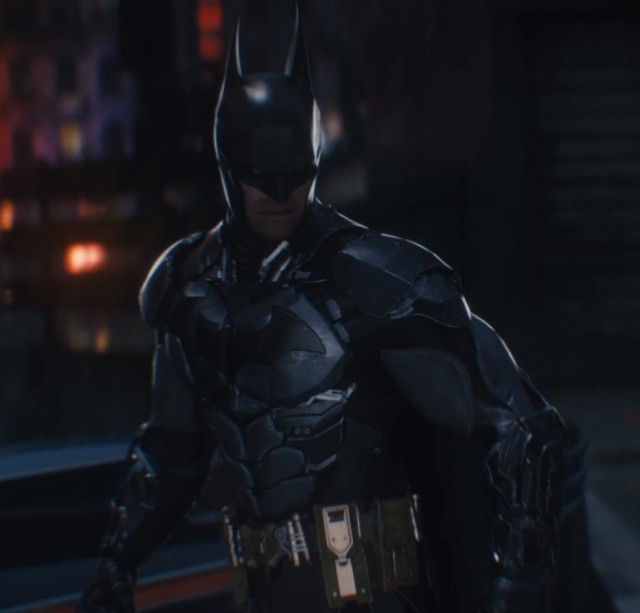 In any case, Rocksteady has also stated that the events of the game will serve as a finale for the franchise. Whether more prequels will possibly be made, or the series will continue with another developer in some form afterward is, naturally, uncertain at this time. Still, it’s unlikely that Warner Bros. will want to wholly abandon such a successful brand in the gaming space, even if it means continuing it without Rocksteady.

For those who played the series’ previous prequel offering, Batman: Arkham Origins, developed instead by Warner Bros. Montreal and featuring Roger Craig Smith as the voice of Batman instead of Kevin Conroy, as well as a new multiplayer mode on all platforms except Wii U, Rocksteady has confirmed that they will be sticking to the design philosophy of Batman: Arkham City for Batman: Arkham Knight. This means that the game will not have any multiplayer component at all, and will be single-player-only. It will also have Kevin Conroy reprising his most famous voiceover role as Batman, a role he’s often held since Batman: The Animated Series, and has continued to hold in successor cartoon, Justice League (Unlimited), as well as Batman: Arkham Asylum and Batman: Arkham City.

It appears that Rocksteady has been working on the game for quite a while, as they already have a concrete release plan to boot! Gamestop’s database lists the game as coming out October 14th of this year, a Tuesday, and very unlikely to be a placeholder. The reveal trailer does at least confirm that the game is set to release this year however.

Fans who pre-order the game will receive the exclusive ability to play as Harley Quinn, who comes with four exclusive challenge maps, along with her own unique gadgets and play style. A similar promotion was offered for the previous Batman: Arkham Origins, which allowed players to play as super-assassin, Deathstroke in a series of exclusive challenges.

Batman: Arkham Knight is set to release for PC, PlayStation 4 and Xbox One. The game is not planned for Xbox 360 and PlayStation 3, nor Wii U, aspiring instead to take full advantage of next-gen capabilities.

Stay tuned to Eggplante for any and all updates on this surely superb series finale!