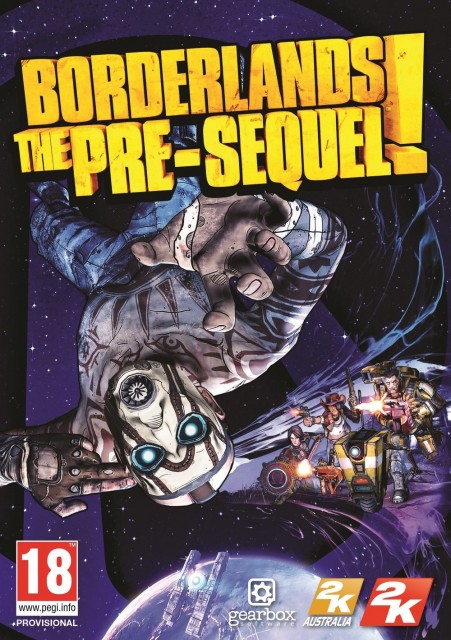 Gearbox and 2K Games have jointly announced an all-new entry in the Borderlands franchise, that being Borderlands: The Pre-Sequel, a full-fledged new retail game release for the popular shooter/RPG hybrid franchise. This follows from an earlier leak suggesting that Borderlands 2 would be receiving some kind of prequel offering.

As the rather cheeky title suggests, the game will be an interquel, taking place between the events of Borderlands and Borderlands 2. It will also take place on a moon orbiting the planet, Pandora, the planet where the mainline entries are set, incorporating new gameplay mechanics in response to the new lack of atmosphere. These include the ability to use oxygen tanks as jetpacks, slam hard into enemies from above with a ground pound, plus, navigation will now be paired with reduced gravity that affects player mobility and jumping range throughout much of the game.

Predictably, four new playable characters/classes will be introduced in Borderlands: The Pre-Sequel, specifically: Nisha, the Lawbringer, who appears to be a ranged fighter, Athena, the Gladiator, seemingly a melee-focused fighter focused on aggressive assault weaponry, Wilhelm, the Enforcer, a tank-like fighter whose massive constitution allows him to outlast foes more easily (he is also a returning character from Borderlands 2), and Claptrap. Yes, for the first time, players will be able to assume the role of a Claptrap, one of the series’ small, mischievous robots, in this case, representing a tech-based, engineer-type class by the look of things.

The story will chronicle the rise to power of Borderlands 2’s fan-favourite villain, Handsome Jack. Beyond that however, much of the story details are being kept tightly under wraps. This sole nugget alone should get plenty of fans excited to play the game however!

This is the latest movement in a franchise that has been extremely active lately, particularly in the wake of Borderlands 2 becoming 2K and Gearbox’s most commercially successful game to date! Borderlands 2 is getting an additional release for PlayStation Vita on May 13th, via both retail and the Vita’s PlayStation Store, but players can snag this port a week early, on May 6th, if they purchase the new Borderlands 2 PlayStation Vita Slim bundle releasing on that date.

Gearbox is also collaborating with Telltale on an upcoming episodic adventure game series, Tales from the Borderlands, announced at this past December’s Spike VGX Awards, though this game is still without a concrete release plan and platform confirmation. Around this time, Gearbox also confirmed that they have not currently started development on Borderlands 3, which will likely be, “A ways off”, according to Gearbox. Gearbox affirmed again with the announcement of Borderlands: The Pre-Sequel that there has still been no work done on a possible Borderlands 3 at this point.

Borderlands: The Pre-Sequel is being joint-developed by Gearbox and 2K Australia, and will be releasing towards the end of 2014 for PC, Xbox 360 and PlayStation 3. Gearbox president, Randy Pitchford confirmed that the game is not planned for release on PlayStation 4 or Xbox One, citing the expensive development costs and lack of a necessary install base for a co-op-focused franchise like Borderlands. Pitchford did however say that, while nothing is set in stone at this point, several high-quality DLC packs are likely going to be inevitable for the new interquel.

Keep tracking Eggplante for all of your Borderlands news, as we can hunt it.