Neighbors is one of those movies that succeeds simply because it’s funny, and it’s really as simple as that. There isn’t a lot of meat to it, not in its story, nor its characters, or even in its raunchy, slapstick-heavy gags. It’s just a satisfying, quick-fix R-rated comedy that will amuse adult audiences who are into low-brow, bad-behaving shenanigans.

On the one hand, this gives Neighbors the slight aftertaste of being disposable. It’s likely not a movie that many people will fondly remember long after seeing it. On the other hand however, in the moment, Neighbors is a go-for-broke, mischievous great time that will make you laugh and occasionally cringe for the right reasons.

There may not be much to read into or revisit beyond the raw, unapologetic immaturity, but you’ll probably be laughing too hard to notice the lack of substance most of the time anyway.

Neighbors chronicles a war between two parties; New parents, Mac and Kelly Radner, played by Seth Rogen and Rose Byrne respectively, and a frat house that has just set up next door to them, led by Zac Efron as buff, macho fraternity president, Teddy Sanders, who is desperate to leave his partying mark on his fraternity’s legacy.

While the parents and the frat initially try to get along, Mac and Kelly end up breaking their promise to Teddy one night about calling the police instead of him when the noise of a frat party is keeping their newborn baby up, and this leads to a full-scale war to force the opposite party out of the neighbourhood. 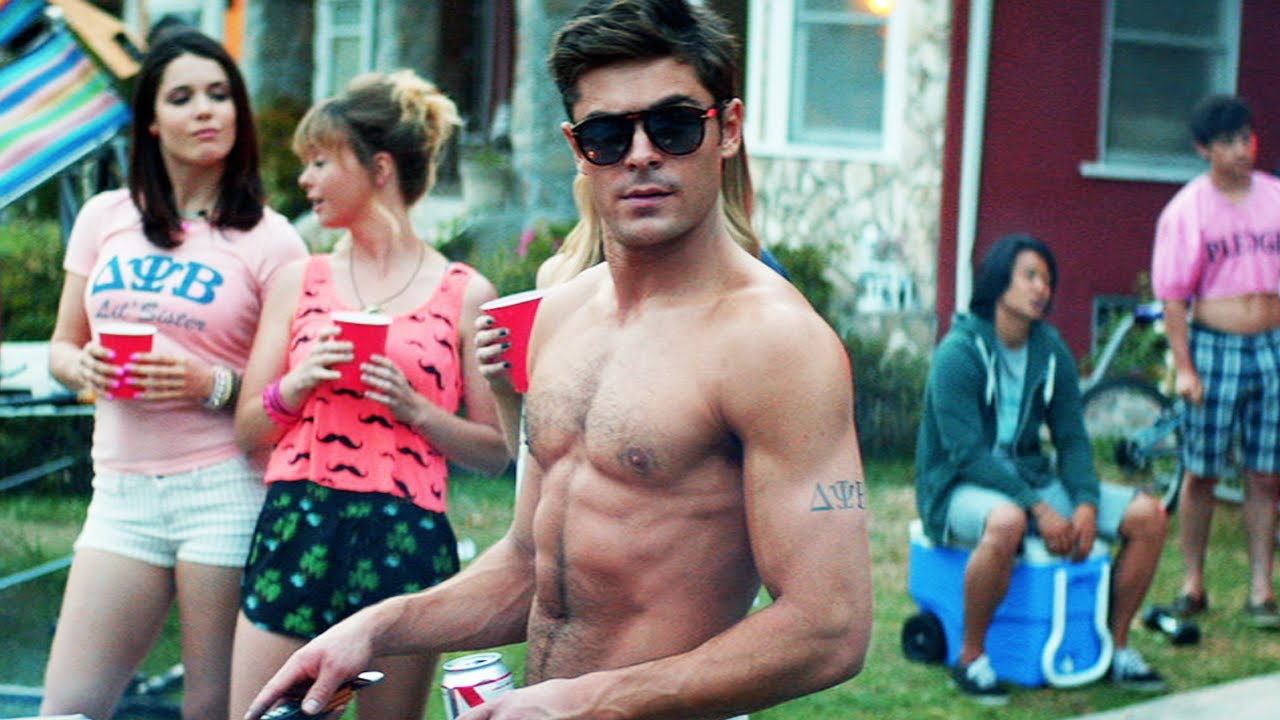 Like so many other reasonable questions that viewers may ask, the reason why the other neighbours don’t complain about what are obviously loud and long-lasting parties seemingly all the time, is explained in a quick hand-wave joke. Likewise, Mac and Kelly appealing to the local university’s eccentric dean, played by Lisa Kudrow, is equally far removed from reality. It’s unwise to go into Neighbors expecting any degree of believable diplomacy from either side.

Again though, it’s difficult to care for long, because even though the movie is blatantly unrealistic, it compensates with many truly hilarious and well-executed jokes. You have to be willing to suspend your disbelief and just let the silliness take hold, but if you can do that, you’ll agree that Neighbors is a very funny movie, even with very little depth given to its cast.

That’s not to say that there’s no depth, mind you. The movie does effectively touch upon the fraternity seeing their futures in Mac and Kelly, knowing that when they graduate at the end of the year, the party is over, and they’ll need to get jobs and build lives. Likewise, Mac and Kelly see the frat as the party that they’re missing in favour of marrying and starting a family, and this creates a question of fulfillment that ultimately leads to sometimes illogical resentment.

In a way, the movie’s most sympathetic character is Teddy, despite the movie seeming to be taking sides and portraying Mac and Kelly as the heroes, while the fraternity are the villains. This is ironic when you consider that Mac and Kelly are far more criminal and manipulative in their actions than the fraternity is too, with Kelly being particularly diabolical, and targeting the boys’ very friendships and trust in one another, not simply their fraternity status.

Anyhow, Teddy is the blatant definition of someone who peaks in his college years, not being very bright, nor really knowing what to do with his life beyond his frat. His much smarter and promising best friend and number-two man, Pete Regazolli, played by Dave Franco, continues to bring this inner struggle in the character front and center. Appropriately, Pete is also often the voice of reason as Teddy gets increasingly more desperate in his war against Mac and Kelly, since he refuses to let go of the year-end blowout bash that he sub-consciously believes will be the last time he’ll ever be worth anything.

Sure, you don’t watch a movie like Neighbors seeking fulfilling characterization, and at least it’s self-aware about the fact that it’s just a silly R-rated movie that exists to make audiences laugh. Still, there is at least some effort put into portraying something, however small, amidst all of the bad behaviour and juvenile gags. This helps the movie lead to a sweet, albeit slightly rushed conclusion to the various character arcs, not just ending on a bunch of property damage and public humiliation for its personalities.

Neighbors sustains itself on more of a premise than an actual, cohesive plot. The movie basically unfolds as a selection of comedy sketches that are bookended by an establishment and a climax. Again, it’s a self-aware comedy that puts the laughs first and foremost, and doesn’t pay as much attention to weaving an actual plotline beyond trying to amuse its viewers with whatever it can.

At a lean 97 minutes long, Neighbors thankfully doesn’t overstay its welcome either. It paces itself well, and provides a reasonably decent escalation from the onset of the neighbours battling each other, without straining the boundaries of believability too much. The only time that the premise is perhaps strained to breaking point is at the start of the third act, when it looks like the battle has been won, and the movie has to pull a weak excuse out of its rear end to arbitrarily re-start the conflict so that it can lead into the climax. 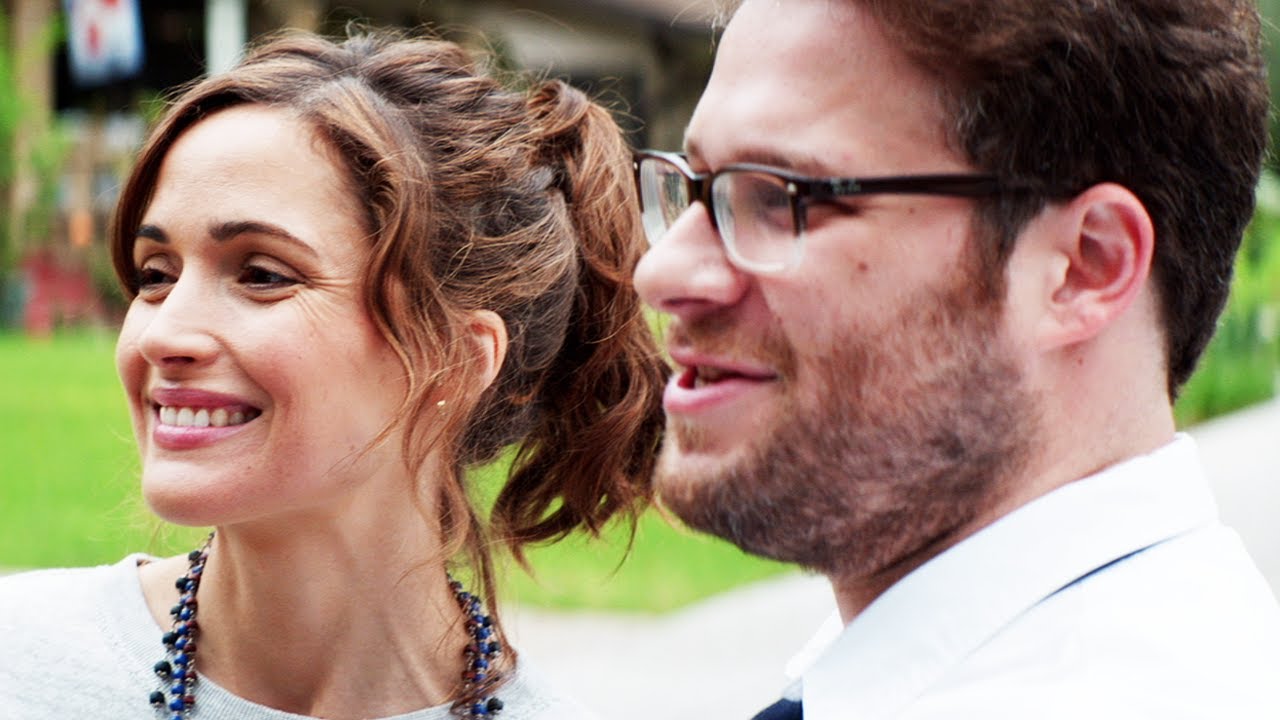 Neighbors is at its core then, a proud party movie. It essentially feels like Animal House in reverse, being a like-minded comedy that celebrates mischief, even if mainly from the perspective of the adults over the frat this time. It’s an undemanding gagfest that is meant to be seen and enjoyed with a collection of one’s friends, and mused about over beer and pizza afterward.

If you’re a pessimist, you could argue that this is ultimately a shallow movie. If you actually have a flexible sense of humour however, then you should be able to enjoy Neighbors’ undeniably amusing collection of jokes for what it is.

Neighbors is helmed by Nicholas Stoller, one of the more popular and capable Judd Apatow-inspired directors to come off of the wave of The 40 Year-Old Virgin and Superbad, with his most well-known R-rated comedy credits being Forgetting Sarah Marshall and its spin-off, Get Him to the Greek.

Predictably, Stoller knows his way around a party movie then, particularly after Get Him to the Greek. Neighbors has a vastly smaller scale compared to Get Him to the Greek, but this allows Stoller to just let loose and have fun with his cast. Everything in Neighbors has a wonderfully cheeky energy to it, making even mundane household sabotage surprisingly funny, thanks to the way that Stoller shoots it. The much-advertised airbag scenes with Mac could have been over-the-top and terrifying in a lesser director’s hands, but thanks to Stoller’s upbeat directing style, watching Seth Rogen get launched through his ceiling by a hidden airbag will have viewers howling with laughter.

Stoller wisely intercuts scenes like this with goofy dialogue and a well-executed lack of consequence, which helps Neighbors avoid the potential trap of being too dark in the end. Rather than feeling genuinely destructive and tragic, the movie often feels like a hard-partying live-action cartoon, which helps the more gross and seemingly dangerous gags still come off as funny, when poor execution could have led to them just feeling needlessly mean-spirited.

It takes an able comedy director to deliver a movie about being mean-spirited that doesn’t feel mean-spirited to its audience, and Stoller’s skilled directing is perhaps the best reason why Neighbors succeeds at being very funny, in spite of itself.

Neighbors is one of those comedies that had plenty of potential to go wrong, but its final product is ultimately an amusing, often hilarious collection of strong jokes. The movie could have easily felt sadistic and nasty with the wrong execution, but despite all of the bad behaviour on display, everything feels surprisingly upbeat and cheerful, as if it’s ultimately all in good fun.

There isn’t much to read into in the end though. Neighbors touches upon the anxiety of growing up and moving on from one’s partying years, but most of the time, it simply exists to make you laugh. That’s fair enough, and it is indeed a noble effort to be an unapologetic R-rated comedy that is happy to focus on doing what it does best, and not biting off more than it can chew.

Like the direction and general presentation, it’s best not to take Neighbors seriously. You simply have to leave your brain at the door, sit back, and have fun, preferably with your buddies. It may be a simple romp, but it’s certainly a funny one while it lasts!

Oh, and it goes without saying, but don’t try any of this at home.

Neighbors Review
Neighbors is a simplistic, juvenile collection of mischievous gags. Even if it lacks a lasting impression, it's still very funny and entertaining as a quick-fix adult comedy.
CHARACTERS65%
PLOT75%
DIRECTION85%
The GOOD STUFF
The NOT-SO-GOOD STUFF
2014-05-20
75%Overall Score
Reader Rating: (1 Vote)
97%