The adventurous Captain Toad will soon get his own video game for Wii U!

Captain Toad: Treasure Tracker has been unveiled as a surprise announcement during Nintendo’s E3 Digital Event, and it’s arriving as soon as this Holiday. The gameplay appears to be much the same style of puzzle/action as its minigame counterpart in certain levels of last year’s Super Mario 3D World, only on a much larger scale with far more ambitious level design. 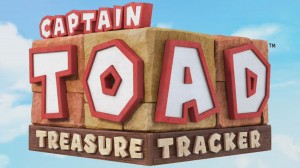 While players could finally control Captain Toad for the first time in Super Mario 3D World, his first appearance, along with his underlings in the Toad Brigade, was actually in the two Super Mario Galaxy games on Wii. In all of his appearances, he is an explorer searching for glory and treasure, and this often has him assisting Mario with his own endeavours.

Regardless, Captain Toad’s play mechanics are highly similar to how he handled in Super Mario 3D World within Captain Toad: Treasure Tracker, right down to navigating an isometric, rotating view. Captain Toad still can’t seem to jump, though he can pick up various items that help him combat enemies and open new paths. Various landscapes include open plains, haunted mansions, lava caverns, and even Super Mario Galaxy-esque space areas. The reveal trailer also appears to imply that Captain Toad may face some bosses, as he’s seen provoking a rather cranky-looking magma-dwelling beast.

Captain Toad: Treasure Tracker will also utilize the Wii U Gamepad to present a first-person view during a sequence where players are on a mine cart, having to toss vegetables at piranha plants. A key collectible in the game appears to be large diamonds, alongside the usual Mushroom Kingdom Coins, and if you look carefully in the reveal trailer, you can also see that the main objective of each level still appears to be collecting a Star.

Keep checking back at Eggplante for news and updates related to Captain Toad: Treasure Tracker, and don’t forget to keep an eye out for the game to release exclusively for Wii U towards the end of this year.