Star Fox fans will soon get to return to their Arwings!

Following Nintendo’s E3 Digital Event, Shigeru Miyamoto confirmed that he is working on an all-new Star Fox game for Wii U, set to arrive on the console next year! The game will utilize the Wii U Gamepad to provide a first-person cockpit view, and players can reportedly deploy the Landmaster Tank from Star Fox 64 at any moment of their choosing! An all-new helicopter-type vehicle is also said to be featured for the game.

News of this project actually leaked early, as TIME Magazine mistakenly violated an embargo by posting an interview with Miyamoto in relation to this new Star Fox game, though it was quickly taken down. Given that Miyamoto himself has now come clean with the new game however, the interview is likely to be back online soon if it’s not already.

No plot details or a final title has been set for this Star Fox game, but it should provide a compelling Wii U exclusive for next year regardless. 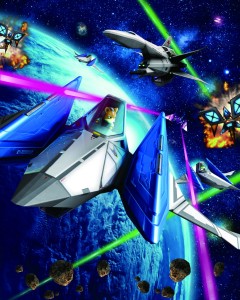 But wait! It gets better! On top of the revelation that a new Star Fox game is in development, Miyamoto also confirmed that he is developing two all-new Wii U IP’s with Nintendo, both under working titles. The first, ‘Project Giant Robot’, involves players building robots, and like the new Star Fox game, it will use the Wii U Gamepad screen to provide a cockpit view. Custom robots can battle with both button or gesture controls (likely depending on whether players are using a Wii Remote or a Wii U Pro Controller), in an effort to knock each other over.

The second new IP is ‘Project Guard’, which appears to be some kind of tower defense strategy game. Players use twelve different camera views to battle against a robot invasion, with the Wii U Gamepad features so far unconfirmed.

Both ‘Project Giant Robot’ and ‘Project Guard’ are said to be releasing next year alongside the untitled Star Fox game as well. Check back at Eggplante! for more news and updates related to these three games, as they’re flown to us.