Sony’s heavy focus on PlayStation-specific incentives in third-party multi-platform game releases during their E3 press conference on Monday was perhaps most noticeable and ambitious when they showcased Ubisoft’s Far Cry 4. Despite Far Cry 4 getting a first-look gameplay reveal of its intro during Ubisoft’s own press conference just hours earlier, the French mega-publisher teased a big announcement to come for the game later in the day.

Turns out Sony was the one to make that announcement. What was it? Only that the PlayStation 3 and PlayStation 4 editions of Far Cry 4 will exclusively allow PlayStation Network friends to enjoy co-op gameplay with you, even if they don’t own the game! This feature will be available right from the game’s launch on PlayStation consoles in November. 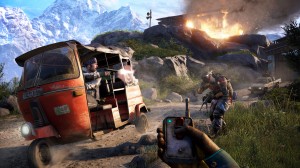 This unique feature will not be offered on Xbox 360, Xbox One or PC at all. Dubbed, “Keys to Kyrat”, the PlayStation-exclusive perk seems to exclusively apply to the drop-in/drop-out ‘Heroes for Hire’ co-op component, which allows friends to join your open-world play session to help you liberate fortresses, undertake missions, and cause all sorts of mayhem for fame and fortune across the game’s fictional Himalayan nation, Kyrat.

Obviously, a PlayStation Network account will be required at the very least to take advantage of this perk in the PlayStation builds of Far Cry 4, and it’s probable that you’ll also need PlayStation Plus in the case of the PlayStation 4 edition. Nonetheless, this should provide a fantastic value for PlayStation gamers who don’t feel inclined to invest in the game themselves off the bat, but have at least one PlayStation gaming friend that will be buying it early.

This capability is unprecedented in a game chiefly made for consoles! Handheld platforms such as Sony’s own PlayStation Portable and PlayStation Vita have supported ‘Download Play’ for years, granted, which allows a host player to share a multiplayer session with friends who don’t own a particular game, though it was Nintendo that largely pioneered the feature on their competing DS, maintaining it on their current 3DS handheld. 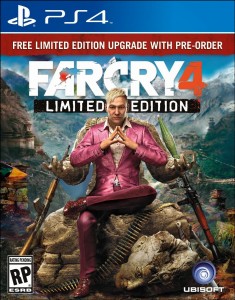 Far Cry 4 will add all sorts of new features to its open-world Himayalan setting, including gyrocopters, weaponized elephants, grappling hooks and wingsuits, all of which were showcased during Sony’s PlayStation 4 demo at their E3 keynote. Ubisoft’s demo set the stage for the story meanwhile, revealing the game’s self-appointed despotic king antagonist, Pagan Min (soon thereafter revealed to be voiced by video game voiceover regular, Troy Baker), and the player character, Ajay Ghale, who travels to Kyrat to scatter his dead mother’s ashes, but ends up embroiled in a civil war between the locals and Min’s corrupt goons.

Far Cry 4 is set to release for PC, Xbox 360, PlayStation 3, PlayStation 4, and Xbox One on November 18th of this year. Those who pre-order any of the five versions of the game get a free upgrade to the Limited Edition, which includes three bonus single-player missions starring returning Far Cry 3 character, Hurk and his harpoon gun, The Impaler, as he searches for a lost artifact in Kyrat. Those who preorder at Gamestop before July 15th will receive another bonus single-player mission, “Blood Ruby” as well.

Eggplante will continue to hunt for your Far Cry news, as we can track it.