We had the chance to sit down with Mr. Eiji Aonuma, Director and Producer of the Zelda series at Nintendo, and discuss his latest game. We also sat down with the Executive Producer and Producer of Hyrule Warriors, which we’ll have in an interview this weekend.

Eggplante: I wanted to congratulate you on the unveiling for Zelda. It’s an honour to be able to interview you about the project. I understand it would be like interviewing The Beatles if I was a 15 year old girl in the 70s.

Mr. Aonuma: No, no, you’re totally over-speaking, comparing me to The Beatles!

E: If it’s okay, I’d like to ask very simply about the new Zelda for Wii U that you unveiled a few days ago.

E: Well this is more difficult now! Tell me about the new art style you have in the game, because it is something that you unveiled that is maybe a mix of Wind Waker, maybe some Skyward Sword, a few other different things. What is it about that style that you really love about the detail, and was it possible to do it this way before the Wii U?

A: It’s actually really interesting because I thought more people would be asking about that particular art style that was shown in the trailer the other day. I thought people would be asking more about why it looks so different than what we showed two years ago. I’ve got designers on my staff that have worked on numerous Zelda games, and I usually ask them, “what do you want,” and you mentioned The Wind Waker and there are elements of Wind Waker design in there, as well as Skyward Sword. That makes a lot of sense because we have staff members who worked on Wind Waker, we have staff members who worked on Skyward Sword, and every time a new project comes up, they really take what they’ve learned in the past, they take the experience they’ve learned on past projects and take advantage of those and work beyond them to make something really creative. I’m always impressed with what they come up with because they’re able to go beyond even what my imagination can come up with. Not only that, the art style doesn’t live in a vacuum, it has to work with the gameplay. And they’re really able to provide something that allows the two of those things to blend.

E: I’m surprised that most people didn’t bring that up. When I first saw it, I thought it was an image, and when I noticed it began to move and actually became some of the gameplay, and it blew me away. It’s really gorgeous! 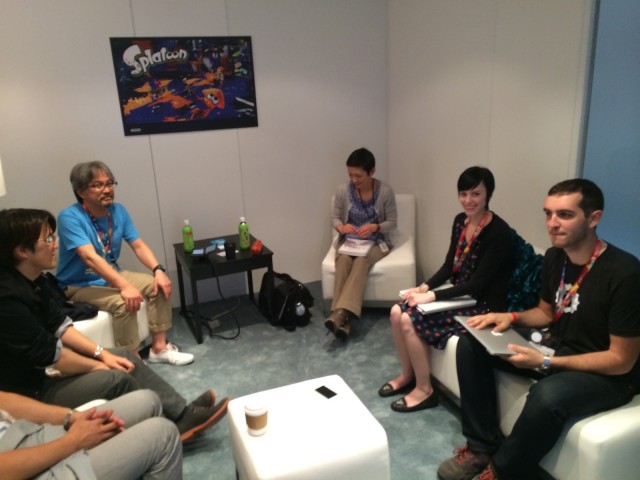 E: With your work as Supervisor on Hyrule Warriors, speaking of the next project, do you want to explore different mechanics like combo systems or faster movement or more enemies on screen at once in a mainline Zelda title?

A: You know, I can’t really say I’m planning on doing this [Hyrule Warriors-style gameplay], but I do think this has opened my eyes to exploring new ways of making the player feel. Not just as they’re playing, but also after playing. It’s that sense of experiencing a game, and then you step away from it, and it’s kind of that reflection. But, I don’t know what shape this [New Zelda on Wii U] is going to take but I do want to learn from this experience and see how this presentation of the Zelda universe is portrayed. It will certainly inform my choices in future Zelda.

E: Wonderful. That’s more than I thought you would be able to say! I would love to ask you–and I know this might be like asking to pick between children–what your favourite game you’ve worked on is.

A: (motions to A Link Between Worlds pin on his lapel)

E: A Link Between Worlds?

E: Thank you very much for your time!

Be sure to check back with us on Eggplante as we have the full interview with the producers of Hyrule Warriors as well as Mr. Aonuma this weekend as we wrap our E3 2014 coverage!