Tammy is a road trip without a destination. Yes, that’s sometimes a recipe for unpredictable fun and adventure in the real world, but on the big screen, it just makes for a frustrating mess.

This comedy comes to us from the combined writing talents of comedy actress, Melissa McCarthy, and her husband, Ben Falcone. Falcone is also directing the movie, with McCarthy starring as the title character. This is also Falcone’s debuting directing credit, and I can’t say I’m surprised.

Tammy at the very least has moments of good comedy. It also has a handful of bright spots, including the effective chemistry between McCarthy and her main co-star, Susan Sarandon. There was potential here for this to work.

However, it just doesn’t. McCarthy’s and Falcone’s script is just not very good, full of unlikeable characters and laboured comedic setups with predictably disappointing payoffs. It’s just an unfortunately weak comedy all around, and it thoroughly pales in comparison to both Neighbors and 22 Jump Street in particular.

The titular lead character of Tammy is a fast food worker who begins the movie by being fired from her job. From there, she decides to re-enact a pattern of self-destruction, only this time, she’s joined by her profane, hard-drinking grandmother, Pearl. Unfortunately, Pearl is the only one with cash and a vehicle, so Tammy is forced to tolerate her. 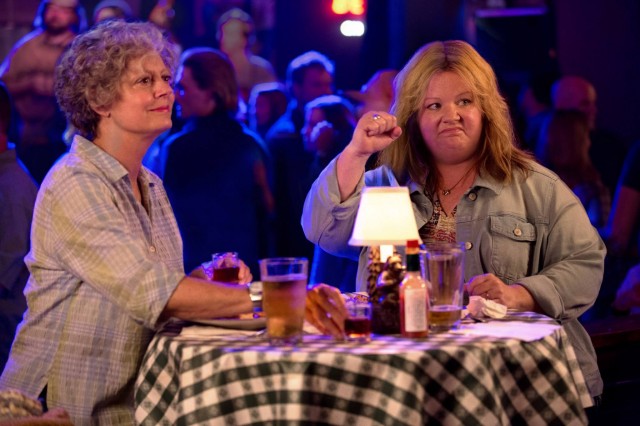 Unfortunately, Tammy makes the horribly misguided decision of not being content to be a black comedy, which it might have succeeded as. Instead, it strangely wants us to root for Tammy. It wants the audience to get behind Tammy as a person. That’s just not a possible task. The character is written to be a complete loser, and she has a terrible personality on top of that.

There is absolutely no pathos behind Tammy or Pearl either. Tammy has a good family, a working car, lives in a good neighbourhood, has a husband at the start of the movie at the very least, and even if it was a minimum wage fast food gig, at least she was employed. The only reason any of these things are compromised is because Tammy herself is just a reprehensible human being, just because. Yes, her car breaks when she hits a deer, but she was being intentionally negligent while driving. Yes, her husband cheats on her at the start of the movie, but Tammy admits later that she drove him to that by, big shock, really not being a good wife.

So, why in the world are we supposed to care about her? Why in the world would we want her to succeed? Again, were it a black comedy where we’re supposed to laugh at her misfortune and the misfortune she causes others by inverting the genre’s formula, that would be fine. Instead, we’re meant to find Tammy funny when many viewers would actually just find her annoying, or feel sorry for her, for the wrong reasons. 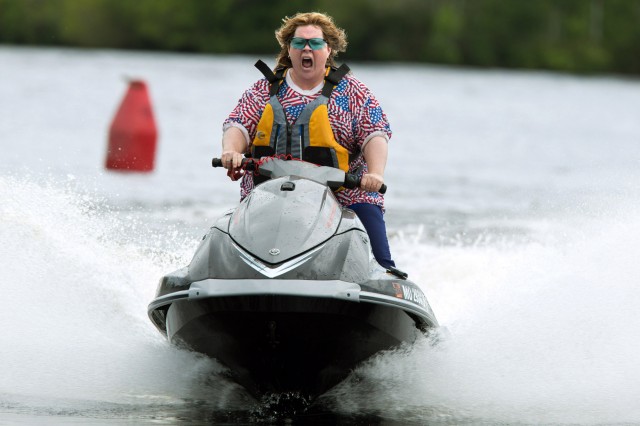 Beyond this, there’s just a truly baffling array of cameos throughout the cast, as if Melissa McCarthy and Ben Falcone just went through their address book and called all of their Hollywood friends. Allison Janney and Dan Aykroyd have bit parts as Tammy’s parents, Kathy Bates shows up as Pearl’s lesbian cousin, and the girlfriend of said cousin is played by Sandra Oh. What a strangely random batch of actors. Predictably, they all sleepwalk through the movie too, with a slightly livelier Kathy Bates being the only exception.

To sum up then, Tammy’s cast just fails to make much of an impression. McCarthy herself is really doing her best, and Susan Sarandon even manages to deliver a few decently funny lines in her irreverent part. Were it not for McCarthy and Sarandon’s energy, the entirety of Tammy would just feel sleepy and confused. It’s still confused, but at least the leads will provide some level of engagement, even if the laughs really should have come more frequently than they do.

Another principal issue with Tammy is that it really doesn’t have much of a story. It’s supposed to follow Tammy and Pearl somehow finding peace with themselves on an ill-advised road trip, but that’s more of a premise than an actual plot.

The entire movie is just far too aimless, and needed to be better structured. The entire script seems to be built on contrivances and poor planning, but that doesn’t make for strong comedy. Some of the scenes in Tammy could have worked as independent sketches, namely the heavily-advertised sequence of Tammy robbing her former fast food joint with a fake paper bag gun, but these better scenes were unfortunately given away at length in the trailers.

For the most part, viewers will just be confused as to what’s happening and why. Tammy wants to be one of those comedies that just wants you to trust it, and wants you to rely on the fact that the movie will be funniest when you can’t predict the gags in advance. This approach worked pretty well in movies like Road Trip or The Hangover in all fairness. Heck, even Neighbors from this very Summer relied on that kind of approach!

In Tammy however, there just isn’t enough inspiration behind the so-called jokes, made all that much worse by the lead characters being complete, irredeemable jerks for seemingly no reason. The result is a supposed road trip comedy without a destination, which, predictably, just ends up feeling like a big, fat waste of time.

Melissa McCarthy’s better half has never directed a movie before, and boy does it show. Ben Falcone doesn’t seem to know how to frame certain scenes properly, and it makes the comedy feel more limp than it should during sequences that should be a lot funnier than they are.

Some comedic scenes are directed well at least, such as Tammy storming out of her house after her husband cheats, followed by a long cut that shows her walking literally a few doors down to her parents’ house, for example. That’s funny, and that’s good comedy directing.

For every decent shot like this however, there’s a bunch of other shots that are just awkward and sometimes cringe-inducing. For whatever reason, the much-advertised robbery sequence begins with a slow-mo dance by Melissa McCarthy, to a gangster rap tune, for upwards of a whole minute. It’s no doubt funny and probably adorable to the lead actress’s husband as he sits in the director’s chair, but to the audience, it just doesn’t make any sense in the context of the scene, and will probably only entertain the very easily amused.

When Tammy isn’t ranging wildly from competent to embarrassing in its direction, often between scenes, the other portions of the movie just feel lethargic. There’s very rarely a sense of energy or real comedic momentum behind how Tammy is shot. The directing is very minimal, and it seems like McCarthy is actually directing the movie with her central performance as much as her husband is behind the camera, and not to good effect.

For all the good intentions and enthusiasm that McCarthy and Falcone seem to have together, it just doesn’t translate to skilled directing and filmmaking, unfortunately.

Tammy is a flimsy comedy that feels very frequently misguided and confused. There are occasional bright spots and a few moments of decent humour, but that’s not nearly enough to merit a trip to the theatre.

With that said, if you’re a big fan of Melissa McCarthy, there might be enough appeal here to carry you through the movie. For better or for worse, this really is her show, even if Susan Sarandon at least provides a solid foil. Be warned however that McCarthy has been used to much better effect, offering much better laughs in movies like Bridesmaids and The Heat. Even her network-friendly antics in CBS’s Mike & Molly are often funnier than they are in the supposedly raw, R-rated Tammy.

Sadly, Tammy is the worst R-rated comedy yet in a Summer that seems to be full of comedies failing to live up to the hype. I suppose we do have Sex Tape and Let’s Be Cops left to look forward to this Summer. Let’s hope they do better.

Tammy Review
Tammy is a weak comedy all around, dragged down continually by unlikeable characters, a confused, unstructured plot, and a general feeling of being a waste of time.
CHARACTERS45%
PLOT30%
DIRECTION40%
THE GOOD STUFF
THE NOT-SO-GOOD STUFF
2014-07-14
38%Overall Score
Reader Rating: (0 Votes)
0%