At the TCA (Television Critics Association) today, it was revealed by The CW that The Flash would be introducing a key antagonist and group of villains for The Fastest Man Alive during the new show’s debut season.

Leonard Snart will be a recurring villain, starting with an introduction in the fourth episode of The Flash. He’ll be portrayed by Prison Break and Resident Evil: Afterlife star, Wentworth Miller, marking Miller’s first high-profile television gig in many years.

DC fans no doubt know Snart by another name; Captain Cold. Captain Cold has freezing technology, cryokinesis, the ability to slow down The Flash’s molecules and render his super-speed powers less effective with said technology, and an extensive knowledge of cryogenic science, particularly in the rebooted New 52 DC Comics universe. Essentially, he is The Flash’s answer to well-known Batman villain, Mr. Freeze, with the two sharing a highly similar combat style and arsenal.

s have a rivalry of sorts in the DC Universe, though we won’t be seeing this rivalry unfold in The Flash unfortunately. The CW is unable to use Mr. Freeze for The Flash, or Arrow for that matter, as Mr. Freeze’s television rights currently rest with FOX for the soon-debuting Batman prequel series, Gotham. Oh well.

Not only is Captain Cold a dangerous nemesis to The Flash by himself, but he also serves as the leader of a group of villains known as The Rogues, who encompass a large count of The Flash’s regular foes in the comics. The Rogues are also set to debut early in The Flash during its premiere season, with Miller’s Captain Cold serving as the jumping-off point for the origin story of the group.

While The Rogues have many members in the DC printed panels, we’ve already got confirmation that two high-profile villains in the group, Pied Piper and Weather Wizard, will debut on The Flash during its debut season. Hartley Rathaway will portray Pied Piper in a regular role, a villain with a hypnotic flute and sonic-powered technology, while a slightly altered Weather Wizard, a villain who manipulates weather effects, will apparently serve as an antagonist in the show’s pilot. 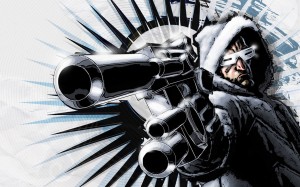 The Rogues have also included villains such as Mirror Master, Captain Boomerang and Trickster throughout DC history, among others. While these characters have not yet been confirmed for The Flash, given their regular status as villains to the Scarlet Speedster, it’s virtually inevitable that we will see them at some point.

Keep zipping back to Eggplante for all of your news and updates related to The Flash.