A highlight event at this year’s QuakeCon is no doubt the first official unveiling of the Doom reboot, a project originally planned as Doom 4, with several pre-release models being scrapped as the game lingered in development hell.

Developer, id Software, now owned by Bethesda parent company, ZeniMax Media, refused to release a trailer or stream any footage online, though that didn’t stop QuakeCon attendees from rapidly posting about a lengthy 15-20 minute demo on social media. Through their combined efforts, we can start getting an idea of what exactly the new Doom game is going to entail.

First and most importantly, as suspected, the game will be next-gen-only, with no Xbox 360 or PlayStation 3 editions being made. It will release for PC, PlayStation 4 and Xbox One, and is currently without a release window.

Equally as important is the official title of the game simply being Doom, not Doom 4, to emphasize that this is a total reboot and return to the franchise’s roots from the 90’s. The previous Doom 3 was also planned to be a series reboot, though it seems that its own design direction wasn’t bound to stick, after mixed fan reception. Naturally, Doom will abandon the slower and more horror-based direction of Doom 3.

When id Software states that the game is a reboot, they really mean it too! Doom will not feature regenerating health, and will maintain health pick-ups like the originals. It will also allow players to carry as many weapons as they want, won’t feature reloading, and will feature many of the classic Doom series weapons, including the plasma rifle, rocket launcher, double-barrel shotgun, and yes, the chainsaw. Weapons are said to have alternate fire modes as well. 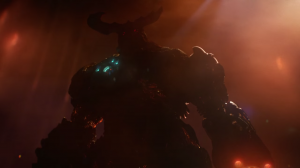 id Software has also emphasized that Doom is not at all about taking cover! Players are able to sprint, double-jump and mantle around the area, with an emphasis on shooting fast and moving faster as you’re overwhelmed by many enemies, again, as with the original games. The Doom reboot is also confirmed to feature many classic Doom enemies, including hellknights, cyberdemons, revenants, mancubii, and more. The revenants even feature new jetpacks that allow them to vault over the player and shoot from above! Enemies can even teleport into the area for retro-style ambushes to boot!

It would seem that Doom is set to be quite challenging on this note. Not only that, but players will suffer gruesome, Fatality-esque sequences when they die, including being ripped apart, or having their helmet punched through. The death sequences vary depending on how you died, and no doubt echo the vaguely Doom-inspired survival-horror game series, Dead Space in this respect.

id Software coyly played to the crowd by teasing that this is only a small taste of the single-player component of Doom as well. They slyly declined to touch on multiplayer, though they did label it as being just as fast-paced and delightfully action-packed as the single-player campaign, which will once again simply involve a light premise of a massive UAC facility being invaded by the forces of Hell on Mars, just like the original Doom from the 90’s.

id Software also re-affirmed that anyone who purchased a copy of their recent May release, Wolfenstein: The New Order will be guaranteed an invitation to the Doom multiplayer beta when it goes live, with the beta being held on PC, PlayStation 4 and Xbox One alike. Bear in mind as well that the Xbox One version of the game is on sale for 33% off on the Xbox One Games Store during the days of QuakeCon!

Since the game is next-gen-only however, people who purchased a last-gen version of Wolfenstein: The New Order will get an invitation to their console’s next-gen successor, so Xbox 360 players will be invited to the Xbox One beta, and PlayStation 3 players will be invited to the PlayStation 4 beta. Obviously, people who bought Wolfenstein: The New Order on a next-gen console or PC will receive an invite for that respective platform.

Sadly, id Software didn’t give any indication as to when the Doom beta may be going live. If you’re interested though, don’t forget that you can still secure your invitation by purchasing a copy of Wolfenstein: The New Order at retail or digitally, so long as you have a next-gen console or gaming-ready PC available, or plan to have one by the time the beta launches. 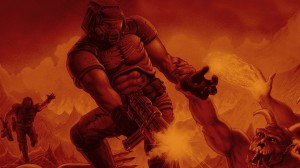 Lastly, for tech enthusiast gamers wondering if the old-school inspiration will negatively affect Doom’s production values, you can rest easy. Doom will be powered by the revolutionary new idTech 6 engine, and id Software has stressed that they are committed to realizing the game in full native 1080p resolution and 60fps performance, on all three platforms. With no last-gen versions being made for Xbox 360 or PlayStation 3, id Software can also focus on delivering a technically ambitious and unencumbered first-person shooter experience, one that combines the best of the series’ retro conventions with the latest in action-packed gaming technology.

Needless to say, we’re as excited as anyone else.

Doom may not have any kind of release window at this point, but Eggplante remains committed to targeting your news and updates on id Software’s beloved demon-blasting franchise.