Atlus has just revealed when 3DS and 2DS owners can get their hands on Persona Q: Shadow of the Labyrinth. The game will be made available for Nintendo’s current line of handhelds on November 25th of this year. 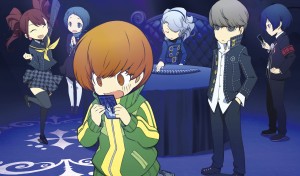 Persona Q: Shadow of the Labyrinth combines the characters of Shin Megami Tensei: Persona 3 and Shin Megami Tensei: Persona 4 in a pure first-person dungeon crawler experience. Yasogami High serves as a hub area where players can talk to other characters, upgrade equipment, heal their party, and so forth. Most of the main gameplay however is spent in the labyrinths, where players engage both shadows, familiar monsters from the Persona series, and special on-field enemies that are highly dangerous to battle, but present great rewards if you can beat them. 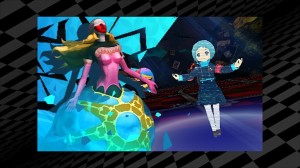 at the storyline of Persona Q: Shadow of the Labyrinth is indeed canon for the highly celebrated Persona subseries of RPG’s as well. The game takes place some time after the events of Shin Megami Tensei: Persona 4, where a bell is heard by the cast of the game during the events of Inaba’s Culture Festival, which also sounds for the characters of Shin Megami Tensei: Persona 3, and traps them all in Yasogami High. The combined allies must then team up to navigate a dangerous set of shadow-filled corridors to try and restore the memories of Zen and Rei, two all-new characters who are said to be able to lead them to freedom.

Along with the release date, Atlus has also unveiled incentives for pre-orders and early adopters, including one of their expected special edition packages. Early adopters who purchase physical copies of Persona Q: Shadow of the Labyrinth at retail will receive a set of tarot cards resembling the evokers used by the characters of the Persona games to summon their titular allies in battle.

If you really want to go all out for Persona’s latest however, there’s also a Premium Edition, which is sadly without a price at this point. The Premium Edition will include the same tarot cards given to early purchasers of a regular physical copy of the game, but will also contain an art book, soundtrack CD, and an exclusive carrying case made for a 3DS XL. If you own a launch model 3DS or a 2DS, this does dampen the value a bit, though 3DS XL players who love Atlus will certainly find the Premium Edition of Persona Q: Shadow of the Labyrinth to be a tempting package. 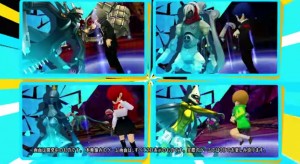 If you just can’t wait for November to get your hands on a new Persona game, don’t forget as well that fighting game spin-off sequel, Persona 4 Arena Ultimax comes to Xbox 360 and PlayStation 3 on September 30th of this year.

Eggplante will continue to divine your news on Persona and Shin Megami Tensei.