NOTE: Some minor to moderate spoilers for the events of Arrow’s second season are present in this article.

After quite a few teases during last season especially, what with Roy Harper discovering Oliver Queen’s secret identity as The Vigilante, getting himself a small case of murderous rage after a Mirakuru injection, and rigorously training with Oliver to master archery and hand-to-hand combat, DC fans will be happy to hear the next logical step; Yes, Roy Harper is set to suit up in Arrow’s upcoming third season.

Entertainment Weekly appears to have let the cat out of the bag early (albeit with The CW’s blessing), with The CW and DC no doubt planning to discuss the debut of Arsenal on Arrow at San Diego Comic-Con in a few days. EW however has shown the first official image of actor, Colton Haynes in full gear as one of his superhero alter-egos from the DC printed pages, Arsenal. Yes, one of them. He’s also gone by, “Speedy” and “Red Arrow” at different points in DC canon.

You can check out said image below: 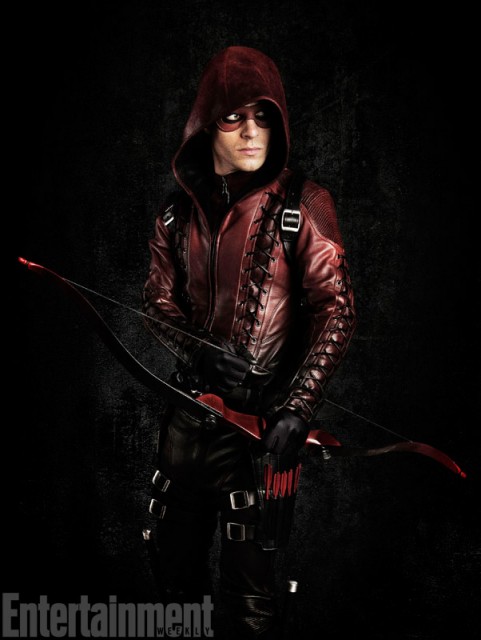 Needless to say, it’s a pretty sweet getup that rivals Oliver’s own. DC fans will no doubt be thrilled to see a fan-favourite character like Roy finally come into his own as another vigilante protector of Starling City as well.

Arrow’s third season is rapidly starting to gel in terms of its direction and probable over-arching conflicts. Many more DC characters are set to debut in the upcoming third season, including The Atom, Katana, the New 52’s Count Vertigo, and potentially Ra’s Al Ghul, who has continued to be teased as the major antagonist of the third season, following Malcolm Merlyn in the first, and Slade Wilson/Deathstroke in the second.

The Arrow showrunners have teased that whoever this mystery villain is, “He doesn’t necessarily disagree with Oliver. He just thinks that Oliver is thinking too small.” That certainly does sound like Ra’s Al Ghul, a Machiavellian extremist who kills and destroys entire cities under the belief that it’s for the greater good, best illustrated in two of Christopher Nolan’s three Batman movies, Batman Begins and The Dark Knight Rises.

Then again, Arrow has thrown curveballs at fan expectations numerous times before, and will likely continue to do so. For now, this mystery foe could be anyone. Regardless, at least Team Arrow has another costumed ally fighting for them now, thanks to Roy Harper’s debut as Arsenal in the new season.

Arrow will be featured during DC’s entertainment panel at San Diego Comic-Con this Saturday, with the show’s lead star, Stephen Amell hosting the event. The highly beloved television series will debut its third season on Wednesday, October 8th, at 8:00-9:00 P.M. EST.

Eggplante will continue to shoot you all news and updates related to Arrow.