Just the other day, Marvel Studios set release dates for five (then six, following the vacating of the May 4th, 2018 date by the now-uncertain The Amazing Spider-Man 4) untitled mystery movies. As predicted, this year’s Comic-Con has seen the identity of at least one of these movies revealed, and yes, it’s a sequel that’s already been rumoured to be in development. 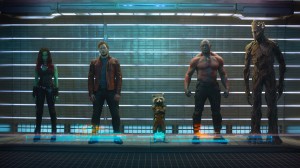 Guardians of the Galaxy 2 has been revealed by Marvel Studios to be the movie holding the July 28th, 2017 date, making it one of three Marvel Studios movies to release that year. The other two still remain unknown however.

The fact that Marvel Studios has already green-lit a sequel to what initially seemed like such a risky movie is hardly surprising at this point. Guardians of the Galaxy, despite being based on a rather obscure Marvel Comics series, has enjoyed huge pre-release buzz, and its initial screenings have been met with highly positive reviews.

Guardians of the Galaxy stars Chris Pratt as Peter Quill, a.k.a. Star-Lord, a human outlaw who inadvertently steals a dangerous treasure being sought by villain, Ronan the Accuser (Lee Pace). Captured and forced to team up with a group of fellow criminals, the assassin, Gamora (Zoe Saldana), vengeful maniac, Drax the Destroyer (Dave Bautista), vehicle-boosting thug, Rocket (Bradley Cooper) and Rocket’s muscle, Groot (Vin Diesel), the so-called, “Guardians of the Galaxy” must keep Star-Lord’s spoils safe for the good of the galaxy. The movie also stars Karen Gillan as Nebula, Benicio del Toro as The Collector, Josh Brolin as Thanos, and Djimon Hounsou as Korath the Pursuer. 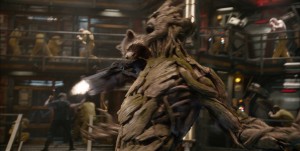 Obviously, no details related to plot, characters or anything else have been confirmed for Guardians of the Galaxy 2, though James Gunn has been confirmed to write and direct the sequel, after already performing said duties on the original.

Guardians of the Galaxy comes to theatres on August 1st, in 3D, 2D and IMAX 3D, and don’t miss our official review on that day for Marvel Studios’ latest!

Keep flying back to Eggplante for all of your news and updates on Guardians of the Galaxy and the Marvel Cinematic Universe at large.