Lucy is weird. Not necessarily weird in a bad way, just undeniably weird. It’s one of those movies that you really have to keep an open mind about.

Lucy appears to be the latest highly experimental effort by French filmmaking superstar, Luc Besson, who has made this mindbender both his latest writing and directing effort. Best known for balls-to-the-wall action flicks like Taken and The Transporter lately, Besson appears to want to try his hand at more left-field movies once again, more akin to his earlier efforts like Leon: The Professional and The Fifth Element. 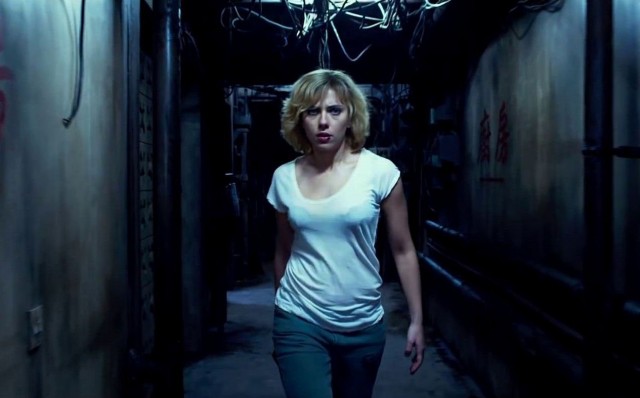 Fortunately, Lucy is a bit more successful than Besson’s previous writing and directing effort, the acceptable, but somewhat underwhelming mob-themed comedy, The Family from last year. With that said, the movie is still flawed in a few places, and despite its noble artistic efforts, it does start to fly a little too far off the handle towards its closing moments.

Still, for those looking for something a little different, Lucy is nonetheless satisfying. It’s not perfect, and it’s lighter on action than the trailers would have you think, but if you want a nice mix between thought-provoking and style, Lucy is worth checking out.

Lucy’s title character begins the movie as a naive, almost air-headed young student studying abroad in Taiwan. By the end of the movie, she’s become a ruthless super-warrior evolved beyond human wisdom. 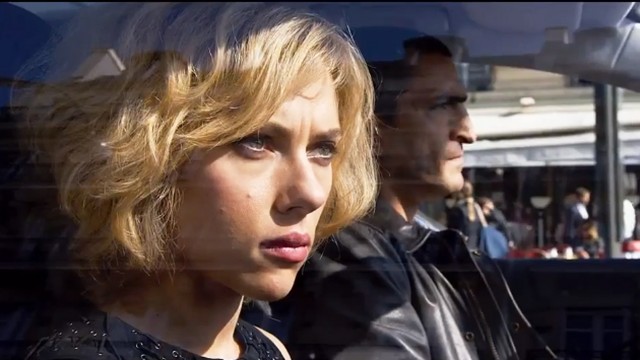 Seeing the journey that Lucy herself undertakes is something that the movie realizes pretty well. It’s undeniably cool to see such an initially helpless character grow into such a god-like super-woman, and have the transformation realized so well. The shift is bolstered all the more by Scarlett Johansson’s superb performance in the lead role, with Johansson’s gravitas being the main thing that prevents Lucy’s more bizarre sequences from becoming unintentionally hilarious at their worst.

There is a supporting cast as well, but few of them really seem to matter in a movie that’s very much using Lucy as an abstract allegory for human ambition. Analeigh Tipton essentially walks in and out of the movie as Lucy’s even-more-air-headed actor roommate, Caroline, and only seems to exist to highlight Lucy’s own swiftly-increasing intelligence in contrast to the lifestyle she once upheld.

Likewise, Lucy drags along a French cop, Amr Waked’s Pierre del Rio, simply to serve as the audience’s gateway into an increasingly unrelatable character. All the while, Lucy and Del Rio are pursued by Korean drug lord, Mr. Jang, played by Choi Min-sik, who is more or less just a device to keep the plot moving and provide some otherwise difficult stakes, considering that Lucy’s powers get absurdly overblown very quickly.

The only supporting character that feels like an actual character beyond Lucy herself is Professor Samuel Norman, played by Morgan Freeman. While certainly a heavy-handed exposition device for Lucy’s evolution, Professor Norman at least feels like someone who is emotionally affected by the plot, and isn’t just there to orbit around the main character’s thematic changes, and gawk at her ever-growing suite of abilities.

As you can no doubt imagine, considering the title and plot structure, Lucy is really Scarlett Johansson’s show. Johansson is the only reason that the movie works at all, being able to sell both the initial vulnerability and later the raw presence of such a challenging lead character. Lucy is one of the best showcases of Johansson’s talents since Lost in Translation for what that’s worth, though even if you’re more inclined to enjoy her in, say, her role as Black Widow in the Marvel Cinematic Universe, Lucy still has enough power and sex appeal to amuse you.

Like I said, Johansson’s presence is the one thing that is holding Lucy back from just being completely silly. You see the movie for her, and no other reason.

You can debate the veracity of Lucy’s plot until the cows come home, namely whether or not the 10% myth of the human brain is grounded in fact in any way. After all, we already had this same debate in 2011 when Bradley Cooper vehicle, Limitless came out, which also involved a fictional super-drug that gave its users superhuman mental capabilities.

Comparisons to Limitless are going to be inevitable with moviegoers, but Lucy is certainly a very different movie in terms of tone and presentation. Limitless was something darker, drearier and more cautionary. Lucy meanwhile takes the opposite stance, reveling in the evolution of human ambition, and celebrating our drive to become the masters of our own universe.

How this head trip gets started is thus: Lucy is a twenty-five-year-old college student studying abroad, and finds herself a n’er-do-well boyfriend that inadvertently ropes her into becoming a drug mule for a mysterious new product being peddled by some Korean gangsters. After being captured and having a pack of the drugs surgically placed in her stomach, Lucy is kicked around by some lower thugs, which causes the bag to leak. This rapidly expands Lucy’s mental capabilities, soon giving her powers and knowledge beyond human comprehension, and gradually stripping away her humanity all the while. 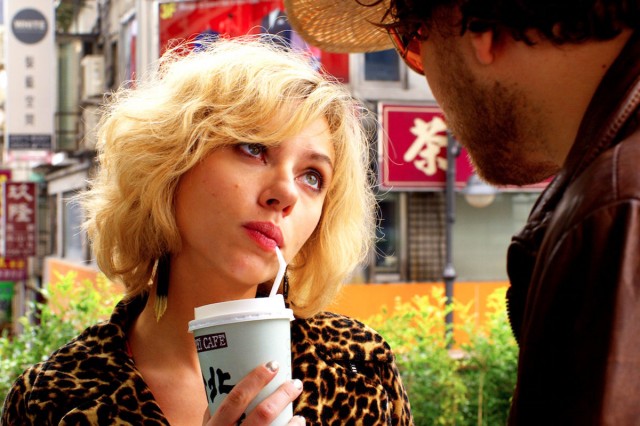 Yes, that premise does have more holes than swiss cheese, but in terms of illustrating the allegory that Besson is obviously going for, it works well enough.

Unfortunately, as Lucy’s plot goes on, it becomes less and less credible with each passing minute. By the final moments, Lucy starts to collapse under the weight of its own symbolism, careening way too far off the rails as Besson starts to strain for his message.

For its flawed ending and occasionally dubious subject matter however, the good intentions of Lucy’s storytelling are still quite palpable. If nothing else, it’s not like most other movies, and it does challenge audiences to re-think how they would otherwise perceive a thriller. It can sometimes be too heavy-handed with its abstract imagery, but a good story is here. You just have to dig for it a bit at times.

Besson is continuing to try and stretch away from raw action with Lucy, though the marketing didn’t seem to get the memo. Granted, Besson’s subversive direction is difficult to sell, but audiences should be aware that Besson is not making another action movie here, as much as it’s sold like one, complete with the reminder that it comes from the man behind Taken and The Transporter.

Lucy’s directing is mostly solid, though as I said, Besson occasionally gets carried away with his allegory. The uses of animal imagery tossed into the story seemingly at random can sometimes be a little obnoxious for example. As much as Lucy is thought-provoking and desires to be smart, it needed to be reigned back here and there.

With that said, Besson’s eye for style still gives Lucy a sharp and memorable presentation. Not since The Fifth Element has Besson made a movie that is so effortlessly striking just in how it looks and unfolds. Even when it gets a little bogged down in exposition and musing, everything is polished and put together very carefully, and you get the sense that this is an ambitious movie that’s been planned out to the best of Besson’s considerable talents. Put simply, it’s never difficult to watch, even when it gets a little weird.

As much as the action may come too infrequently for those expecting some real carnage, there are still a handful of key action moments, and Besson still has a knack for setting them up wonderfully. Lucy sometimes feels like it squanders its R-rating, having only a few moments that feel any more violent than what you’d see in a PG-13 flick, but the small pockets of action do feel thrilling and well-presented.

It feels like a bit of a bait-and-switch at times, granted, since Lucy’s final product is not consistent with how it was sold to viewers, and it’s important to enter the movie with the proper expectations. Still, Besson had a vision, and it’s one that he only occasionally seems to fumble, realizing a large-scale project that, frankly, would have turned out a lot worse in most other directors’ hands.

Lucy has a few interesting moments of visual effects, though it’s difficult to adequately talk about them without spoilers. Still, given the small budget, the movie still feels stylish, even if occasionally a little mind-bending.

The effects come more and more into play as the movie goes on, even if they also seem to remove Lucy progressively further from reality. There are some undeniably cool moments though, even if many of them were unfortunately given away in the trailers, and at least the movie is consistently visually pleasant, even at its most strange.

It’s unfortunate then that the most ambitious visual moments come during the problematic ending moments, where the collapsing story gets in the way of what’s on screen. Still, as much as viewers will no doubt have different thresholds for Lucy’s abstract weirdness, there’s something to be said about how effectively it sets itself apart from Besson’s other works.

Lucy is a movie that will probably polarize many people. Some will see it as a deceptively brilliant and boldly wise new take on the Hollywood thriller. Some will see it as a pretentious mess of ideas that collapse under their own weight, and betray the promise of an action movie where Scarlett Johansson gets superpowers and lays waste to criminals in exotic locations.

Me? I’m somewhere in the middle. I feel that Lucy is a good movie, and certainly a noteworthy movie for Luc Besson’s catalogue, but it has a few flaws, and it’s not for everyone. It doesn’t deliver what you would expect necessarily, but what it does deliver still has enough merit to carry open-minded audiences through.

So, if you want something a little different and reasonably memorable, Lucy should prove to be a welcome break from the glut of Hollywood-friendly Summer blockbusters. If you’re in the market for a hard action flick though, you’d best save your money for something like The Expendables 3 next month.

It’s doubtful that Lucy will have the timeless cult appeal of The Fifth Element if I’m being honest, and that’s unfortunate, but at least it proves that Besson is still good for more than mindless action.

Lucy Review
Lucy is a bit of a mindbender, and starts to fall apart in its final minutes, but it at least succeeds as a thought-provoking, experimental and subversive thriller with its own clear identity.
CHARACTERS65%
PLOT70%
DIRECTION80%
VISUAL EFFECTS75%
THE GOOD STUFF
THE NOT-SO-GOOD STUFF
2014-07-30
73%Overall Score
Reader Rating: (0 Votes)
0%