After a leaked online retailer listing at Amazon, Square Enix has confirmed the existence of Sleeping Dogs: Definitive Edition. As suspected, the game will be a next-gen re-release of Square Enix’s surprise hit sandbox game from 2012, Sleeping Dogs. The game originally released for PC, Xbox 360 and PlayStation 3.

Sleeping Dogs casts players in the role of Wei Shen, an undercover police officer infiltrating a gang of Triads in Hong Kong. Shen has family and childhood history with this particular gang, hence why he is chosen for the undercover operation. Players must decide whether Shen acts more in accordance with police law or Triad law, with his loyalties continually tested and pulled between two worlds.

Despite being considered to have undersold by Square Enix, Sleeping Dogs was well-received by critics and gamers alike, and still sold well above retailer expectations, despite largely borrowing gameplay elements from competing franchises like Grand Theft Auto and Batman: Arkham. It has gone on sale on digital game storefronts on numerous occasions due to its surprise success, and it was once offered as a free reward both on the PlayStation 3’s PlayStation Plus catalogue, and the Xbox 360’s Games with Gold catalogue. 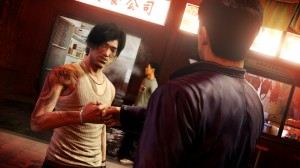 Sleeping Dogs: Definitive Edition will not only include a next-gen re-tooling of the original release, complete with improved graphics and other such technical elements, but will also bundle in the DLC from the original last-gen release for free as well. While many of these DLC packs are simple cosmetic and arsenal additions, this will also include full-blown story expansions, including the Nightmare on North Point and Year of the Snake expansions.

Sleeping Dogs: Definitive Edition comes to PlayStation 4, Xbox One and PC on October 10th of this year. United Front Games is also working on a sequel, tentatively titled Triad Wars, though this new game is without any details or release information at this time.

Keep shifting back to Eggplante for all of your news and updates on Sleeping Dogs.