Given the belated Wii U announcements for the Call of Duty series over the past couple of years, it was up in the air as to whether or not the series’ latest upcoming offering, Call of Duty: Advanced Warfare, would be coming to Nintendo’s console or not. 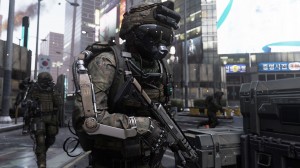 Now however, Activision has given the final word; No, Call of Duty: Advanced Warfare will not release for Wii U. Activision apparently made the decision, wanting to instead focus most of their efforts on the Xbox One, PlayStation 4 and PC versions of the game.

This is no doubt a disappointment to Call of Duty fans who prefer to play on Nintendo platforms. Each mainline installment in the series has eventually made it to Wii or Wii U, ever since 2006’s release of Call of Duty 3. This will be the first time since then that a main series entry will not make it to Nintendo’s current console.

To date, two Call of Duty games have been made available on Wii U, those being Call of Duty: Black Ops II, which was a launch title for the console back in November of 2012, and Call of Duty: Ghosts, which launched alongside the PC, Xbox 360 and PlayStation 3 versions this past November. Both Wii U ports were well-received, particularly in how they incorporated the Wii U Gamepad in split-screen play, though they didn’t sell nearly as well as their cousins on Xbox, PlayStation or PC platforms.

This omission comes as yet another blow this week for core gamers that own a Wii U. Yesterday, Ubisoft declared that Nintendo gamers, “Don’t buy Assassin’s Creed“, and as such, they wouldn’t bother releasing Assassin’s Creed: Unity nor Assassin’s Creed: Rogue on Nintendo’s console, and likely not any other future Assassin’s Creed games made during this hardware generation. Likewise, Ubisoft also bluntly stated that Watch Dogs, still in development for Wii U after being delayed out of the May launch date held by the currently-available five competing versions, would be the last, “Mature” game that the European publisher releases for Wii U.

In any case, Call of Duty: Advanced Warfare is being developed by Sledgehammer Games, the new addition to a now-three-year cycle for the Call of Duty series at publisher,

Activision, with Sledgehammer Games previously assisting in the development of Call of Duty: Modern Warfare 3 in 2011. Treyarch and Infinity Ward remain on board as series developers, with each presenting a new Call of Duty game for this hardware generation every three years.

Call of Duty: Advanced Warfare moves the setting of the highly celebrated first-person shooter series to the futuristic landscape of 2054, incorporating all sorts of hi-tech gadgetry and weapons in a war alongside and against private military corporations. House of Cards’ Kevin Spacey will lend his likeness and voice to one of the game’s key villains, Jonathan Irons.

Call of Duty: Advanced Warfare is currently available for pre-order, both the standalone game and a Collector’s Edition, and will release on November 4th of this year. It will come to PC, Xbox 360, PlayStation 3, PlayStation 4, and Xbox One. As usual, the series will offer priority DLC releases on Xbox platforms.

Keep scoping Eggplante for all of your news and updates on the Call of Duty series.