On the heels of news that a recent DC antagonist, Komodo would come to Arrow for its upcoming third season, The CW has also confirmed yet another more modern DC antagonist for a television stint, this time on this Fall’s premiering Arrow spin-off, The Flash!

Greg Finley (The Secret Life of the American Teenager) has been cast in the role of Tony Woodward, who becomes DC super-villain, Girder. The CW has confirmed that Woodward will gain his comic book abilities on the show, which turn his body into, “Living metal”, granting him immense strength and highly increased resistance to any kind of physical harm. The downside, however, is that he is susceptible to rust.

Woodward made his first appearance in Flash: Iron Heights, a comic from 2001. He has served as a more recent antagonist for 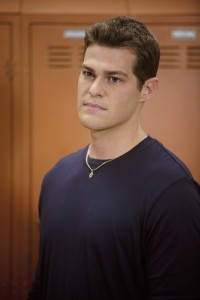 both Barry Allen and Wally West, two different generations of men adopting the mantle of The Flash. In the former DC Comics Universe, Woodward started a riot at the steel plant he works at by assaulting a woman he works with, leading to him falling into a vat of molten steel that has been chemically altered by scraps from S.T.A.R. Labs experiments, thus turning him into his metallic form.

Since that origin would be a little far-fetched for a live-action television series however, Woodward will simply gain his powers from the same S.T.A.R. Labs explosion that contributed to Barry Allen’s super-speeding abilities, according to The CW.

Girder will debut in the sixth episode of The Flash, and return in the seventh.

Keep zipping back to Eggplante for all of your news and updates on The Flash, and the DC Television Universe at large.