NOTE: Some mild spoilers for the debut season of BoJack Horseman are present in this review.

Netflix Originals are a wonderful thing. They’re a loophole that circumvents FCC network syndication rules, allowing for full seasons to release all at once, with the flexibility to be more raw, creative and true to a great vision. House of Cards and Orange is the New Black have both more than proven the potential for Netflix as an avenue for exclusive television shows, and it really does seem like this could be the future of small screen entertainment.

Unfortunately, as great as Netflix Original shows have been at this point however, there’s also some potential pitfalls with this new direction for TV programs. First, lump season releases prevent shows from tweaking future season episodes based on continued audience feedback, which is more easily done in syndicated network shows. This essentially makes every Netflix offering a leap of faith from the start. Second, there’s more trust involved in seeing a debuting Netflix season through to the end, since you have to trust that the showrunners can shoulder everything themselves, and if you stubbornly stick to finishing what you started, you’re more likely to just end up feeling like you wasted your time when you don’t get the resolution you hoped for. 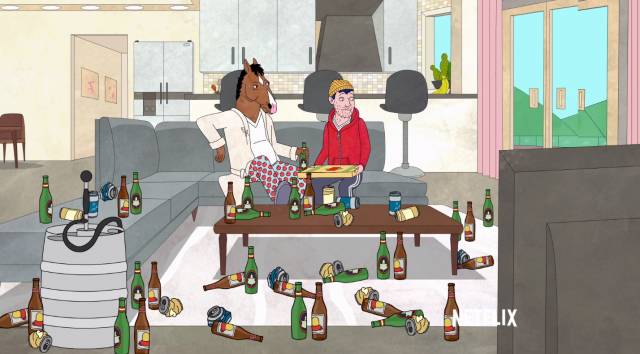 Both of these issues should be considered with BoJack Horseman, Netflix’s first original animated comedy series. Launching with 12 episodes, each around 25 minutes in length, and featuring an all-star cast that includes Will Arnett, Aaron Paul, Alison Brie and Amy Sedaris, with talented comedians like Kristen Schaal and Patton Oswalt in recurring supporting roles, BoJack Horseman is triumphantly storming out of the gate with all of the comedic potential one could imagine.

Unfortunately however, its final product is much more middling than it should be in its debut season, given its surreal world and premise.

BoJack Horseman is a show about its titular lead character, a washed-up sitcom star from the 90’s that has now turned 50, and is consumed by a world of self-deprecation, substance abuse and general dead ends. BoJack also happens to be a horse… Of course. In fact, BoJack happens to live in a world where human characters are inexplicably mixed with anthropomorphic animals like BoJack himself. Hey, why not? It certainly gives BoJack Horseman its own unique style amidst the mostly simplistic animation.

This places the show somewhere between the non-sequitur weirdness of Family Guy, and the minimalist deadpan stylings of Bob’s Burgers. The Bob’s Burgers inspiration is particularly evident, given that BoJack Horseman shares several of its voice actors with that show. It’s definitely an ambitious blend of comedy styles, and on paper, it suits the idea of centering on a satirical look at celebrity emptiness pretty well.

Unfortunately, all of these good ideas are let down by several frustrating problems, which prevent BoJack Horseman from being as entertaining as it could be at this point. It’s clever, yes, but it almost feels too content to simply be clever, forgetting most of what engages audiences and actually makes them laugh.

Will Arnett does what he can as the voice of BoJack himself, giving the character a cynical and exasperated personality that is somewhat hit-or-miss, but at least manages to elevate the occasionally weak jokes he’s, ahem, saddled with. BoJack is already a challenging role for a comedy actor, given that the character is written to be so detestable and self-destructive, and yet, we’re still supposed to root for him. Arnett may not completely transcend the limitations in the writing, but he does enough to at least give BoJack some depth, even with his myriad bad habits. 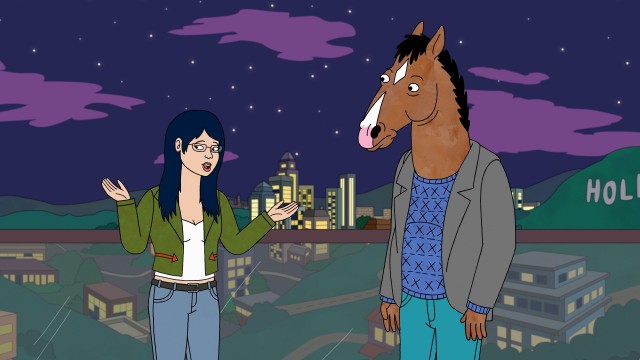 The main season arc comes from BoJack wanting to write a memoir, and predictably getting nowhere when left to his own devices. His penguin publisher, Pinky Penguin of Penguin Publishing (hurk, get it?), eventually gets fed up, as his business is going under simply due to being a publishing house in a digital age. Thus, he forces BoJack to hire a ghost writer, that being Diane Nguyen, a woman that BoJack has immediate chemistry with, but who happens to be dating BoJack’s celebrity rival, the obliviously chipper canine, Mr. Peanutbutter, who starred in a show with the exact same premise as BoJack’s, at the same time.

Diane is one of the show’s worst missed opportunities, since she’s voiced by the very talented Alison Brie, yet is forced to be the straight woman to BoJack, who is already an apathetic, drugged-out has-been. Considering Brie’s loveable personality on Community, and the fact that she gave a hilariously memorable voice to the manic Unikitty in The LEGO Movie, Brie just isn’t given anything to do here. She’s supposed to be the eyes of the audience when it comes to BoJack’s life, which is sound in theory, but it would have been better, had the character either been given more quirks, or the rest of the cast been given more energy.

In fact, energy is far too rare a commodity in BoJack Horseman, which is part of the reason why many of its jokes too often fall flat. This may not bother you if you’ve managed to enjoy deadpan comedies like King of the Hill, a show that prided itself on its lack of expression, but considering that this show wants to capture the audience of Family Guy and Bob’s Burgers, it really needs to be more engaging. 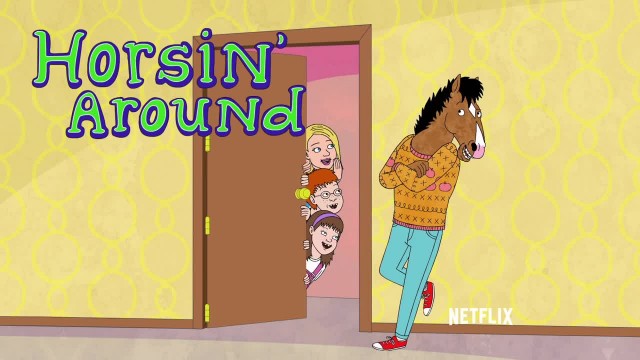 Thankfully, Amy Sedaris effectively picks up the slack as BoJack’s agent and on-again/off-again lover, Princess Carolyn, a humanoid pink cat. Sedaris steals every scene she’s in, and every episode that she’s a focus of, since her character really gives BoJack Horseman the shot in the arm that it needs. Right from her introduction during a messy break-up, to the very funny reveal of her being BoJack’s agent in the next scene, Princess Carolyn is a consistently unpredictable, interesting and conniving character, looking to poach clients and get away from BoJack’s bad press as much as she can, despite continually being sucked back into his problems.

The show needed more characters like this. Fortunately, the guest characters are more along these lines, but that will no doubt frustrate many viewers, since we don’t see more of them. Patton Oswalt is a very funny addition in more than one role, but most often Pinky Penguin, whose perpetual misery and bad luck effectively echo the also-funny character of Gil from The Simpsons. Likewise, Kristen Schaal provides a standout guest turn as BoJack’s former young co-star, Sarah Lynn, who has grown into a hard-partying, highly promiscuous and borderline-psychopathic basket case.

One of the season’s best episodes in fact revolves around Sarah Lynn moving in with BoJack, and pretty much ruining his living situation with her own terrible habits. This beautifully works to illustrate the show’s thematic message, as well as paint a picture for BoJack about how his actions affect others, on top of just being really damn funny.

Unfortunately, since Sarah Lynn is merely a guest character, she’s out by the end of the episode, and only shows up once or twice more in the season after that. Frankly, she should have been a lead character, and definitely would have made a better roommate than BoJack’s equally lazy roommate, Todd, whom BoJack inexplicably complains about, despite being a shiftless slob himself. 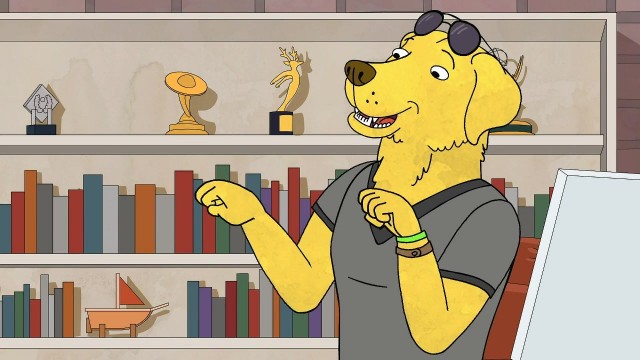 Todd happens to be a frustrating character in general. He can be funny, and he’s voiced well by Aaron Paul, clearly enjoying the chance to unwind a bit after his very intense turn as Jesse Pinkman in Breaking Bad, but the show just never seems to know what to do with Todd. There’s a few Family Guy-style allusions to his mostly unknown past, but they never really gel with anything else that’s going on in this debut season, beyond providing some mild throwaway jokes. It’s easy to get the sense that Todd is a benchwarmer, who is just simply floating around and taking up screentime while the showrunners no doubt have bigger plans for him in a hopeful second season.

Similarly frustrating is Mr. Peanutbutter, another character that the show seems confused about how to handle. While Mr. Peanutbutter mostly provides an upbeat, effectively successful contrast to BoJack, despite ripping off BoJack’s sitcom back in the day, there are a handful of moments where Mr. Peanutbutter contradicts his own character. There’s an entire episode dedicated to BoJack and Mr. Peanutbutter competing with each other in a jealous feud over Diane’s attention, but this completely goes against Mr. Peanutbutter mostly being a self-absorbed, oblivious nimrod. Sure enough, beyond one major event that dictates the rest of the season, this inexplicable personality turn is never seen or mentioned again either.

Things only get worse when Diane and Mr. Peanutbutter decide to get married as well, in what is easily one of the most clumsy story arcs of the entire season. I do applaud the showrunners for not taking the easy way out with this arc, which is the one bright spot about it, but everything else in this story element feels problematic. Diane and Mr. Peanutbutter completely throw out having consistent thoughts and personalities at times, and the entire conflict simply feels forced, with BoJack pining for Diane on a level that partially makes sense, but not entirely, given his prior relationships. 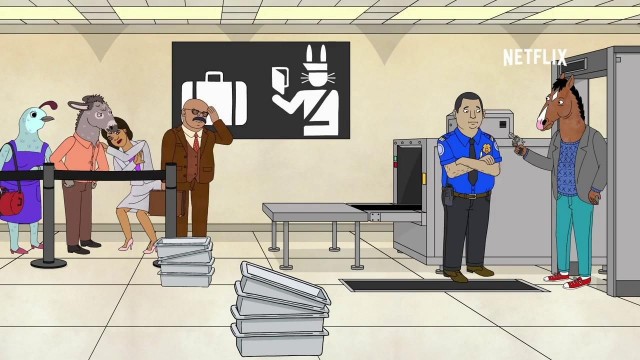 There’s a great show screaming to get out amidst this too-often botched outer layer of storytelling, and if it’s given a second season, BoJack Horseman can definitely improve with a handful of simple tweaks. For now however, the show has themes that aren’t explored in any interesting way, and has middling comedy that can elicit some giggles, but never enthusiastic laughter. Despite some highlight jokes and some great secondary and tertiary characters, BoJack Horseman just never feels like it totally gets off the ground.

Like its titular lead, BoJack Horseman is not bad at its core. If you like darkly comic portraits of colourful losers, then the show may well be up your alley, even if it won’t amaze you by any means. Also like its titular lead however, the show is not currently realizing its potential, and seems too often content to wade in simple misery, and never commit to anything worthwhile. I do hope that the series gets a second season at least, as the show will no doubt get better in a follow-up season, but sadly, I wouldn’t be surprised if it didn’t make it that far either.

Despite everything, I’m rooting for BoJack and his show. I just wish that he was more interested in actually meeting viewers halfway.

BoJack Horseman: Season One Review
BoJack Horseman is occasionally funny, but like its lead character, it's too often disappointing, and is not currently living up to its potential.
THE GOOD STUFF
THE NOT-SO-GOOD STUFF
2014-08-26
60%Overall Score
Reader Rating: (2 Votes)
94%