If you weren’t amused by the recent Mercedes-Benz DLC that Nintendo authorized for Mario Kart 8, you’ll no doubt be more interested in the huge suite of follow-up DLC that they’ve just announced, which will bring separate Nintendo franchises to the Mario Kart series for the first time! 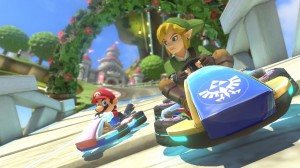 Yes, new characters, vehicles and courses (both retro courses and all-new tracks!) are headed to Nintendo’s well-received Wii U racer, with the first, the Legend of Zelda Pack, releasing this November, and the second, the Animal Crossing Pack, arriving in May of next year. The two DLC packs will each add three new characters, four new vehicles, and eight new courses.

With the recent 2.0 update to Mario Kart 8, you’ll be able to pre-order both DLC offerings in advance, as sort of an after-the-fact Season Pass for the game. This would make Mario Kart 8 the second Nintendo game to offer pre-purchase DLC, 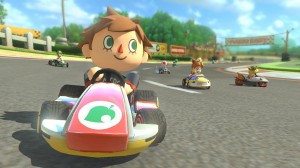 after Mario Golf: World Tour on the 3DS boasted a Season Pass for the first time in the Big N’s history this past May. Pre-purchasing both DLC packs together can be done for a lump sum of $12.99, saving you a few dollars, since each pack will cost $7.99 to download individually.

The Legend of Zelda Pack will 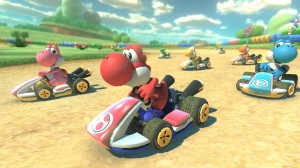 include Link as a playable racer, in his The Legend of Zelda: Skyward Sword incarnation, along with Tanooki Mario and Cat Peach as the other two new racers, no doubt in reference to Super Mario 3D Land and Super Mario 3D World. One of the new tracks will be themed after the Legend of Zelda series, and one of the new karts will be the Blue Falcon from Nintendo’s cult favourite F-Zero racing game series. The rest of the new tracks and karts in this pack are unknown at this time.

At least one of the DLC packs will also offer the Wario’s Gold Mine track from Mario Kart Wii, which is the only confirmed retro track in the DLC packs for now. Tracks inspired by F-Zero and Excitebike are also claimed to be in the works for the new double helping of DLC.

Sadly, if you were hoping for new power-ups or play modes, Nintendo has clarified that neither of the DLC offerings will include these. Oh well.

Mario Kart 8 is far and away the most successful Wii U game to date, with sales of the standalone game and a recent console bundle leading to a spike of almost 700% in Wii U sales worldwide! Nintendo still took an annual operating loss due to the continued struggles of the slow-selling console, but Mario Kart 8’s strong sales and immensely positive feedback (including from us!) have paved the way for drastically increased interest in the Wii U as of late. After Nintendo largely stole the show at this year’s E3, Gamestop claimed that Wii U’s sales fortunes will no doubt pick up soon as well, and stated that they believed that the Wii U would be an especially hot Holiday item this year, due to the approaching release of Super Smash Bros. for Wii U.

Keep racing back to Eggplante for all news and updates on Mario Kart 8, and other great Wii U incentives.