Club Nintendo members are about to get a very special offer! 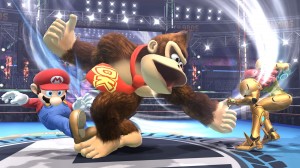 Fortunately, since Club Nintendo is free, and registering is as simple as filling out a short survey about why you purchased both games, this is an easier deal than attaining the soundtrack of Super Smash Bros. Brawl, which had to be painstakingly assembled in-game by finding randomized collectible CD’s across every match you undertake. If you’re not already a member, simply go to https://club.nintendo.com, and fill out the basic information. Simple as that!

As if that weren’t enough, you can sample a handful of the game’s tracks on the Club Nintendo website, at least, for Super Smash Bros. for Nintendo 3DS. Take a look if you want a taste of the Nintendo favourites that are being remixed for the series’ first portable off

As we’ve already stated, there are no disadvantages to being a Club Nintendo member. You never pay a cent for the privilege, and for every eligible game you purchase for 3DS or Wii U (mostly first-party games published by Nintendo themselves, with some third-party options), you can register and fill out surveys to earn Coins. Coins can be redeemed for exclusive Nintendo merchandise that can’t be found anywhere else besides Club Nintendo, along with free downloads of certain Virtual Console and eShop games that cycle every month, and if you amass enough Coins to become a Gold or Platinum member for the year, Nintendo will send you a special reward that you can select every June/July.

Keep smashing back to Eggplante for all of your news and updates on Super Smash Bros., along with any great Club Nintendo incentives!