Hit puzzler sequel, Peggle 2 is finally ready to expand beyond Xbox platforms! EA has just announced that the game will come to PlayStation 4 on October 19th of this year. Unfortunately, there was no confirmation of a PlayStation 3 release at this time. 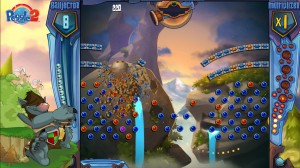 Like its predecessor, Peggle 2 is a simple, yet fiendishly addictive puzzle game! Players launch a ball across a board of pegs, in a sort of hybrid between pinball and pachinko, trying to clear all of the orange pegs off of the board before they run out of balls. Assisting them all the while are the Peggle Masters, who can activate special powers whenever a player hits a green peg, allowing them to potentially turn each playing field in the player’s favour a certain number of times.

Peggle 2 originally launched as an Xbox One exclusive last December. The game then came to Xbox 360 this past May. We reviewed the original Xbox One release when it first came out, and declared it the best reason to own an Xbox One during the launch window, astonishingly enough. We updated the review with impressions of the Xbox 360 version (and will do again when the PlayStation 4 version arrives), and once again praised the game as being one of the best offerings on the Xbox Live Arcade catalogue.

Keep launching back to Eggplante for all of your news and updates on Peggle 2, and other great digital download offerings.