Team Ninja’s well-received fighter, Dead or Alive 5 is the latest last-gen game to be making a belated leap to next-gen consoles. The game was originally released for Xbox 360 and PlayStation 3 in September of 2012. 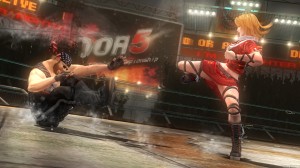 The next-gen re-release of Dead or Alive 5 will be called ‘Dead or Alive 5: Last Round‘, and is so far only announced for Japan, even if a Western release is no doubt inevitable at some point. The Japanese will get the game in Spring 2015, so it may be a little while before fighting game fans in North America and Europe can get their hands on this latest edition of Team Ninja’s fighter.

It’s also unclear exactly what kind of upgrades will be present in Dead or Alive 5: Last Round so far. A small visual and performance upgrade is no doubt to be expected, along with Share Button/GameDVR functionality, but it’s unknown whether any further re-balances will be made to the game, nor if any new fighters will be added to the roster.

Regardless, keep punching back to Eggplante for all of your news and updates on the Dead or Alive series.