Warner Bros. has just announced a release date for their enormously anticipated Batman: Arkham finale, Batman: Arkham Knight. The game is set to arrive on June 2nd, 2015, simultaneously for PlayStation 4, Xbox One and PC.

This date marks a rather massive delay from the game’s original planned release of October 14th of this year, spanning eight whole added months in the cooker. Its delay stands even longer than that of Watch Dogs, another hallmark open-world game for next-gen hardware, which was delayed for almost seven months, and only came out at the end of this past May on five of its six planned platforms. The Wii U version still lingers in development, and is said to be releasing this Fall.

Along with the reveal of the date, Warner Bros. has also confirmed two special editions of the game, along with its expected standalone standard edition retail release. These editions are called the Limited Edition, and the Batmobile Edition. The former retails for $99.99 USD, and the latter for $199.99 USD. Also, be advised that both special editions are limited to PlayStation 4 and Xbox One only, with neither available for PC, unless you live in Europe, Australia or New Zealand, where the Limited Edition at least will be offered on PC. Worldwide however, the Batmobile Edition only comes for PlayStation 4 and Xbox One. 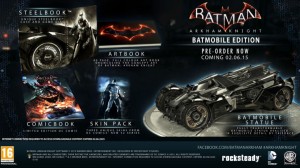 The Limited Edition of Batman: Arkham Knight contains, along with the game itself, an 80-page art book, a steelbook, a limited edition Batman: Arkham Knight #0 comic, three exclusive in-game skins based around DC’s New 52 Batman comics, and a Batman memorial statue. The Batmobile Edition includes all of these goodies, along with a transformable Batmobile statue, and one that apparently commands a whole $100 value, if Warner Bros.’ pricing is any indication.

These incentives stand on top of an automatic incentive for pre-ordering any edition of Batman: Arkham Knight, which allows you to play as Harley Quinn. On top of that, those buying the game for PlayStation 4 will get exclusive Scarecrow missions that are completely unavailable on Xbox One or PC.

Keep swooping back to Eggplante for all news and updates on Batman: Arkham Knight.