In celebration of the adolescent superhero task force, the Teen Titans celebrating their 50th anniversary this year, Warner Bros. appears to be set to expand the well-beloved squad’s audience like never before! According to credible Hollywood source, Deadline, who broke the scoop just recently, Warner Bros. is developing a live-action TV series for cable network, TNT called ‘Titans‘, set to bring the Teen Titans to the small screen in live-action for the first time! 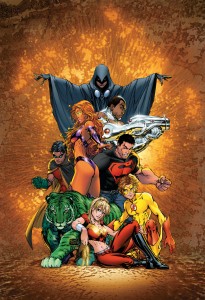 The only major detail of the pilot that has been ordered by TNT is that the series will star Dick Grayson, a.k.a. Nightwing, the former Robin that has since graduated from being under Batman’s wing to head his own team of young heroes. Starfire and Raven have also been confirmed for spots in the show, with the latter once having her own TV series in the works at Warner Bros., before it stalled and was ultimately shelved.

If the show gets picked up, Titans will join an ever-increasing slate of high-profile live-action television shows inspired by DC Comics, many of which are getting their start during the soon-starting 2014/2015 television season. Arrow, which stars DC Universe archer, Green Arrow, currently stands tallest as a veteran live-action DC series, starting its third season on October 8th, and currently being the most well-received and most-viewed show on The CW at present. Arrow will be getting a spin-off starting on October 7th, The Flash, which stars the titular super-speeding hero operating in that same universe’s Central City. Over on FOX, high-profile Batman prequel series, Gotham will begin airing later this month, with Constantine bringing its own titular occult specialist to NBC in October. iZombie will also begin airing mid-season on The CW next year, inspired by the Vertigo/DC Comics series, and the network is also rumoured to be a frontrunner for the recently-confirmed and currently untitled Supergirl-starring series. 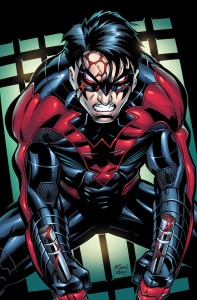 Aside from Nightwing, Starfire and Raven, the Teen Titans have had numerous young DC heroes join their ranks throughout DC’s history. Blue Beetle, Donna Troy, Red Robin, Kid Devil, Beast Boy, Cyborg, Bunker, Ravager, Miss Martian and more have been affiliated with the group at various points. Any of these characters could be fair game for the prospective TV series, with only Blue Beetle being a less likely candidate, considering that Warner Bros. has already teased plans for the character in The CW’s shared DC Television Universe.

Keep rushing back to Eggplante for any news and updates on Titans, and other prospective developments regarding DC’s television projects.