There have been truly remarkable artistic games on current PlayStation platforms. The likes of Flower, Sound Shapes, Journey and more have captivated players worldwide with not just their abstract presentation, but in the way they attempt to challenge the fundamentals of how we understand video games.

Hohokum, the third PlayStation Store indie game that’s part of this year’s PLAY 2014 selection, aims for this same sort of artistic appeal. The only game of the four to be completely exclusive to PlayStation platforms, published and developed in-house at Sony, as a collaboration with British indie studio, Honeyslug, Hohokum seems like a shoo-in to succeed the likes of Flower and other such games.

Hohokum however falls shy of the offerings of PlayStation’s most talented artistic developers like Thatgamecompany. It’s still a thoroughly captivating experience in terms of its presentation and inspiration, but gameplay-wise, Hohokum doesn’t marry gameplay and art as effectively as some of its PlayStation Store predecessors of a similar ilk. This leads to a game that feels frustratingly uneven, often being beautiful and serene, but not as relaxing to play as it is to take in.

Still, if you are a fan of art house gaming, Hohokum is well worth playing for its $14.99 asking price, particularly as a cross-buy offering for PS3, PS Vita and PS4 together. Just be aware that the illusion sometimes flickers.

Hohokum’s colourful art style is, in a way, rather minimalist. The game unfolds as a moving set of simple shapes and patterns. There’s often a mere backdrop colour, with simplistic geometry being used to realize both people and environments. Even the player character, a serpentine entity called ‘The Long Mover’, is merely a squiggly line with an eyeball at the end.

What might have come off as lazy in lesser hands however looks very unique and pleasant in Hohokum. The game definitely has a look and feel that are entirely its own, and regardless of which platform you’re playing on, there’s something oddly calming about the game’s array of hues and shapes. It’s something that you just have to experience to fully understand.

Even if Hohokum’s visuals are mostly indistinguishable between platforms, there are a few differences in performance and presentation to note between the three versions. As one can expect, the PS4 version runs the smoothest, and its superior resolution will often give players the best view of their surroundings, particularly with the ability to zoom in and out using the right analog stick. The PS3 version looks mostly the same as its next-gen sibling, but since it caps at 720p resolution, there’s a slightly reduced sense of scale on Sony’s last-gen console, albeit a barely noticeable one. On PS Vita, everything looks just as sharp and lively as it does on Sony’s consoles, though be aware that the PS Vita version sometimes chugs a bit, and its load times are noticeably longer than on PS3 or PS4.

One gripe to note is that Hohokum doesn’t allow you to adjust the screen parameters as you play. This can lead to the screen looking annoyingly off-center during load prompts in particular, with no way to adjust it, particularly if you move between platforms. I started my playthrough on PS Vita, for example, and then quickly switched to PS4 to compare, and since then, the resolution has automatically been locked for the Vita’s screen. Thus, when I play on PS3 or PS4, the screen is mis-aligned, and there’s nothing I can do about it. It certainly doesn’t ruin the game, but it feels surprisingly sloppy in an art game that’s all about enjoying the evocative visual style.

Ultimately though, Hohokum is a remarkable visual piece on any of its three platforms. It may look very simple, but it’s a fantastic testament to less being more in the right hands.

Hohokum’s soundtrack entirely consists of calming, simple melodies, along the same lines as its visual style. Playing on PS Vita is a particular delight, since you can plug in headphones (which the game actively advises you to do when you start this version), and really lose yourself in the game, in a way that isn’t quite the same on consoles, even with a good surround sound system.

The sound effects complement the music, being simple tones and hums, as if you’re playing with some kind of living art toy. The unique world of the game is fun to simply interact with at your leisure due to the fun and satisfying sound design. The playful audio cues often feel like their own reward, and beautifully combine with the colourful, minimalist graphics in a way that really makes it gratifying to simply play with the game world at your leisure.

Like the visuals, you just have to experience the sound to really understand it, but it’s difficult to argue that Hohokum is as lovely to listen to as it is to look at.

Hohokum claims to allow players to enjoy the experience at their own pace. There is a surprisingly ambitious trophy, the game’s lone Gold Trophy, to try and earn for beating the game in under an hour, granted. For the most part though, Hohokum is a game that strives to reward experimentation, and aims to surprise players in a satisfying way as much as possible.

But does it fare well in that endeavour? Yes and no.

Hohokum has some truly brilliant gameplay elements. The way that you sort of ‘swim’ around the game world with the left analog stick by wiggling the Long Mover around feels noteworthy and cool, though it’s sometimes dragged down by the somewhat rigid turning speed. The Long Mover can’t turn on a dime very well, which is especially apparent on PS Vita, where you’re dealing with smaller, stiffer analog sticks. It’s not often a problem, but during the rare moments where you have to be precise, and especially when you have to rush through the game in less than an hour for that Gold Trophy, it can be pretty annoying to not have smoother movement.

Another issue here is that dictating the Long Mover’s speed can be somewhat awkward. The boosting mechanic is the worst element of this problem, since you have to use L1/L or R1/R to make the Long Mover pick up speed, yet when you do, it curves in either direction, and you then have to hold the X Button to keep the rhythm going, and hope you don’t run into anything. Needless to say, it’s clunky. Slowing down by holding the Circle Button works a little bit better, but even then, the occasionally fussy turning makes managing speed harder than it has to be if you’re doing a speed run.

Another good mechanic however is the varied level design, with worlds that are full of non-traditional objectives. One world has you revitalizing a theme park. Another has you tormenting an artist so he can find inspiration. Yet another has you helping to proceed a wedding. If there’s one thing great about playing Hohokum, it’s the fact that the game’s objectives are tasks that you don’t really do in just about any other video game out there, on PlayStation platforms or otherwise.

But herein lies another problem; Hohokum is often frustratingly vague, and almost consistently gives you a poor idea of what you’re actually supposed to do in any of its various worlds. Yes, the game wants you to experiment, but there’s a fine line between encouraging players to be creative, and just not giving them any direction whatsoever. Too much of the game is simply spent squiggling around, knocking against whatever in hopes that it will actually accomplish something.

When you do start to find solutions, Hohokum is rewarding and often surprising, but its obtuse style drags it down with a poor sense of consistency and feedback. There’s no getting around the fact that, even after you discover each solution, there are certain worlds that are just innately more fun than others. At its worst, the game can be a tedious chore, with goals that range from pathetically simple to annoyingly drawn-out, and too rarely finding a middle ground between the two.

Your overarching goal is to find fifteen hidden serpent spirits that are similar to the Long Mover. Hohokum basically functions as an abstract game of hide-and-seek. Exposing each serpent is done when you assist each world in some unknown fashion. Again, it could be as easy as filling some champagne glasses, or as ornate as helping along an entire factory assembly line. Fortunately, since Hohokum is completely non-linear and unrestricted, you can simply move on to another world and come back if you find that one area is just starting to annoy you. This is helped further by being able to freely return to a hub area from the pause menu, where you can return to any world you’ve already been to from a simple network of islands, preventing you from getting lost.

Ultimately, even if it’s sometimes too unclear in its actual world design, Hohokum itself is very simple, and is ultimately very easy for anyone to pick up and play, on any of its three platforms. There aren’t any added touches on PS3, again making it the most perfunctory version of the bunch, as with the other PLAY 2014 games. The PS Vita version occasionally incorporates the touch screen with some interactions, but it’s purely optional. Likewise with the PS4 version allowing you to navigate certain areas with the controller’s touch pad. The PS4 version also has the controller’s light bar dynamically change in colour as the Long Mover does, which is very cool, and gives the PS4 build of Hohokum a neat added sense of style. 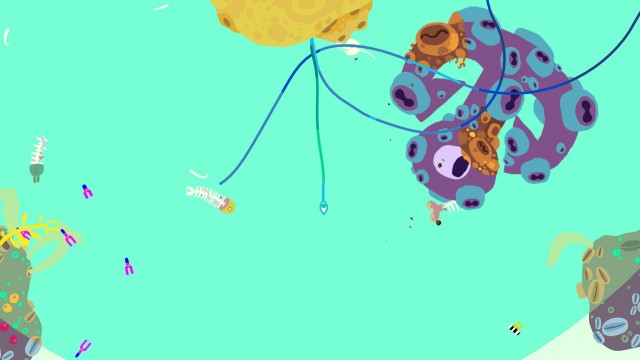 It’s too bad that Hohokum is not more consistently enjoyable to play, because as an experience, it’s truly captivating. If you don’t mind simply treating the game as an artistic journey without a focus on the destination, then the game’s flaws may not bother you quite so much. If you actually play games to see them through, you’ll no doubt wish for more of a road map.

Hohokum may not be Sony’s new art house champion, but it’s still an appealing experience, if you’re willing to overlook the frustrating lack of direction. The game is great to experiment with at one’s own pace, but more established gamers will simply be annoyed that they are given absolutely no way to discern what they’re supposed to do in most areas.

Still, if you’ve managed to enjoy games like Journey and Sound Shapes at length, you’ll still enjoy Hohokum. Once you do start figuring everything out, the game becomes pretty short, though the $14.99 price presents a decent value when you consider the three-way cross-buy capability, at least, if you own multiple current PlayStation platforms. Hohokum is realized very well on any of Sony’s current devices, so you won’t get a seriously hampered experience outside of the cutting-edge PS4 like you did in the case of the previous PLAY 2014 game, The Swapper.

You have to really appreciate the art of methodical creativity to really get behind Hohokum. Not all of its individually great ideas perfectly come together, but like any piece of worthwhile art, it’s still not difficult to admire the vision behind the effort.