If buddy cop movies have taught us anything, it’s that a pair of yahoo’s with police badges will often have all the fun together. With that said, why even bother with police training in that case?

Such is the pitch that spawned Let’s Be Cops, an R-rated comedy that has the unenviable task of rounding off a Summer that has sadly been plagued by underwhelming adult comedies this year. Only Neighbors and 22 Jump Street delivered some decent, reliable laughs, but even then, they’re nowhere near in the league of the big R-rated comedy hits from the past several years, including The Hangover, Bridesmaids, Ted, 21 Jump Street, and Hot Tub Time Machine, among others.

Fortunately, Let’s Be Cops is one of the better comedies that this past Summer managed, even if it’s still just above middling. If nothing else, the concept is pleasantly original, and lead actors, Jake Johnson and Damon Wayans Jr., who already share the small screen together in successful sitcom, New Girl, and are known to be good friends in real life, bring some solid laughs to proceedings. The result is all the more impressive when you consider that both men improvised a hefty chunk of their lines throughout filming, working with a script that was ultimately very loose and flexible. 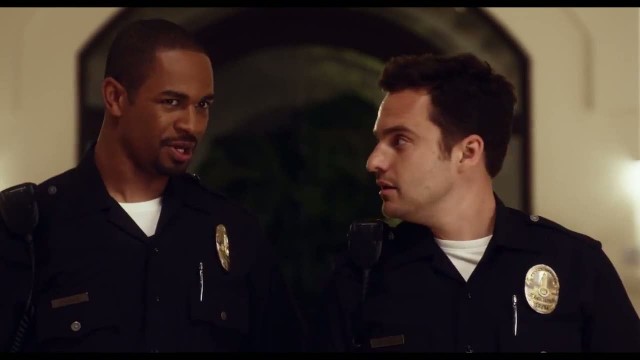 To that end, Let’s Be Cops is reliable and amusing, and that’s far better than the sorry state of most of 2014’s Summer comedies. If you’re merely looking for a silly, feel-good comedy that’s high on mischief and low on consequences, this one should entertain you quite effectively.

To an extent, Johnson and Wayans Jr. have switched personalities compared to their counterparts on New Girl. Now, it’s Johnson that plays the more lively, comical character, while Wayans Jr. plays the exasperated straight man. As you can imagine, Johnson’s Ryan, an unemployed, immature jackass that wimped out of being a pro football player, often proves to be a bad influence on Wayans Jr.’s Justin, a downtrodden video game developer who is bullied by his boss, and is too timid to talk to the girl he likes. Go figure.

It’s true that you can predict several of the story beats in Let’s Be Cops before they happen. Thankfully, a strong cast keeps the jokes coming and the tone upbeat though, even if most of the comedic proceedings are held up entirely by Johnson and Wayans Jr. Naturally, Ryan is the one reveling in the life of pretending to be a cop, while Justin keeps insisting that everything is the last time, and they need to be more responsible. You can guess who tends to win out in these scenarios. 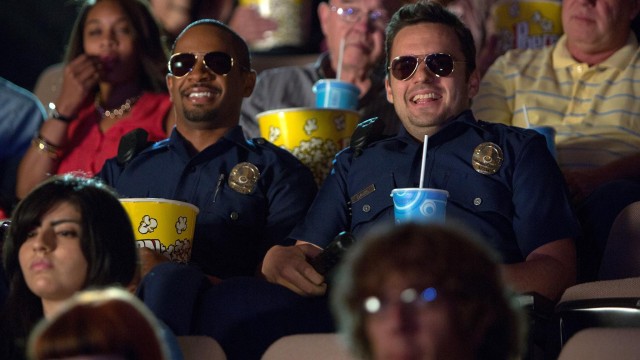 In a way though, that’s the point of the movie. Ryan may be a loser, but at least he made his bed. Justin is a more wishy-washy individual that is routinely frustrated with his situation, yet doesn’t have the balls to really change anything. Again, you can likely predict the character arcs of these two before they happen, but established chemistry in a buddy cop comedy (even one without the actual police credentials!), is established for a reason; It works.

Beyond Ryan and Justin, the characters are pretty typical. You have your menacing villain, your unwitting damsel-in-distress, your bully of the meek character, etc.. In fact, something that’s a bit disappointing about Let’s Be Cops is the fact that it doesn’t introduce its better supporting characters until much later in the movie. Rob Riggle plays the only relatable, credible human personality in the movie, as an actual cop that is surprisingly oblivious to Ryan and Justin’s charade. Likewise, Keegan-Michael Key absolutely steals the show as a loud, highly eccentric and truly hilarious criminal that the two ‘arrest’, but he doesn’t even appear until the lead-in to the climax. At the same time, you get a great character that could have been, thanks to a bold nymphomaniac with a cop fetish that the two run into more than once, with Ryan believing that what she doesn’t know probably won’t hurt her.

Ultimately, considering the potential of the premise, Let’s Be Cops doesn’t break the comedy mould all that much. It’s still funny, but it’s ultimately pretty safe with its character arcs. That’s fine, since it’s certainly better that the movie didn’t bite off more than it can chew, considering its proudly giddy and juvenile tone.

The original premise behind Let’s Be Cops is truly brilliant. After all, who hasn’t at least had the fleeting thought of how fun it would be to have the benefits of being a police officer. You don’t have to follow the rules of the road, you command the respect of almost everyone in the city, and you can make people do all sorts of ridiculously demeaning things with a simple voice command. All of these things and more are activities that Ryan and Justin abuse while wearing their phony police garb. 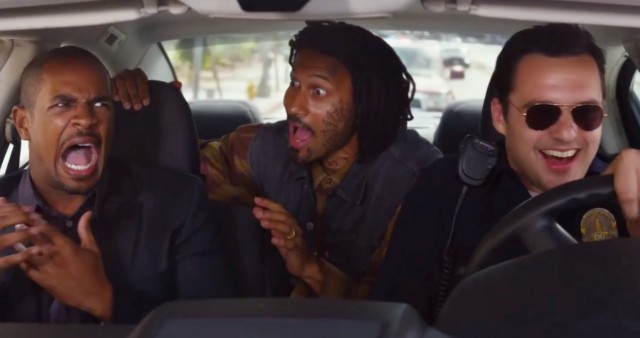 Things kick off when Ryan gives Justin an ultimatum for a costume party that they’re being forced to attend; They can be ghosts, or cops. Since Justin is sick of Ryan’s lazy ghost costume, he agrees to let the two use some fake police uniforms that Justin bought to try and pitch a video game to his mean-spirited boss. Unfortunately, since Ryan mistook a masquerade party for a costume party, Justin leaves in humiliation, with Ryan forced to duck out with him. As the two walk along the street however, they notice that people believe they are real police officers, and Ryan starts trying to see what he can get away with, having a reluctant Justin come along for the fun. From there, the act keeps getting pushed further by Ryan, with Justin ultimately too unassertive to stop it, and naturally, things eventually escalate out of control.

Again, the premise is a little more original than the story proceedings, which ultimately don’t veer too far into unfamiliar territory. As much as the concept is original and very inspired, this certainly isn’t the first comedy about two idiots getting into mischief, and subsequently ending up in over their heads. That said, Let’s Be Cops is still a fun and amusing movie, since both the written and improvised jokes hit more often than they miss. They won’t have you rolling in the aisles, but they’re bound to get at least a consistent array of giggles out of viewers, with a handful of truly great laugh-out-loud moments sprinkled here and there. 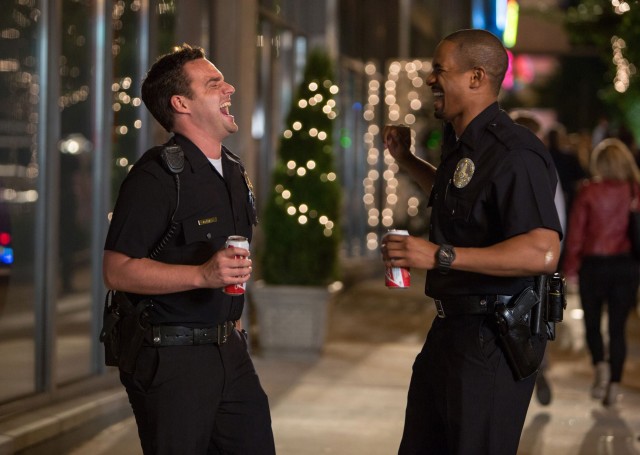 It’s not a difficult recipe for a Summer comedy, and in a better Summer for R-rated comedies, Let’s Be Cops would have simply been dismissed as serviceable and forgettable. Considering this past Summer and its frequently disappointing comedy offerings however, Let’s Be Cops feels satisfying on the sole basis that it works, considering a high-profile movie season where most of the comedies didn’t work for whatever reason. Maybe it got lucky on lowered expectations for most moviegoers at present, but at least it won’t make them feel like they wasted their money.

Luke Greenfield directs Let’s Be Cops from a script of his own, which he co-wrote with TV writer, Nicholas Thomas. The idea is based on a real-life experience of Greenfield’s at a Halloween party, where he wore an authentic LAPD uniform, and gained high confidence as a result. It’s a very sound idea for a comedy, and while he ultimately could have taken it further than he does, at least Greenfield ensures the integrity of his script by preventing it from becoming too wide in scope. 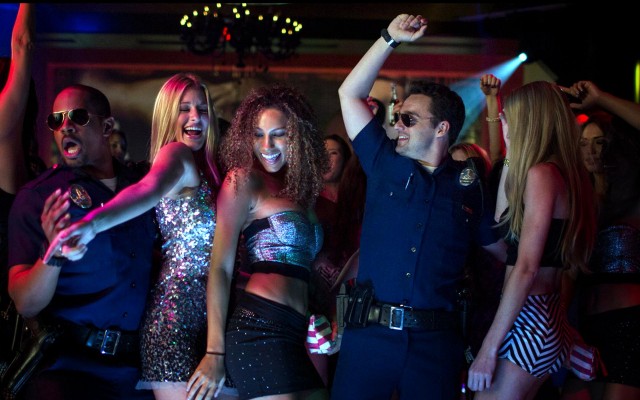 Sure, it’s easy to crave at least a bit more risk-taking on Greenfield’s part, but what he delivers from behind the camera is still solid. Everything is shot competently, if not remarkably, and the handful of action scenes are reasonably effective and harrowing, particularly when the audience is fully aware of the leads’ deception, when other characters who are depending on them obviously aren’t.

Like the rest of the movie, there isn’t a lot to say about the direction, but there’s nothing outwardly wrong with it either.

Let’s Be Cops is a pleasant and silly distraction that at least closes out the Summer comedy lineup on a somewhat satisfying note. Again, it’s nothing special or especially memorable in the long term, but it gets the job done for a Summer season when almost everything else in the comedy genre fell short. 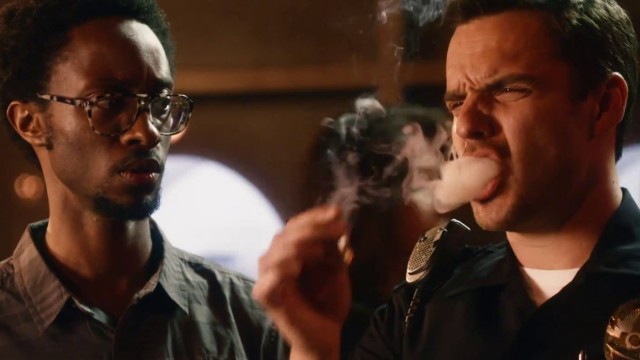 Neighbors and 22 Jump Street are still slightly better comedies from this past Summer, since they did a little more with their premises, but you’ll still laugh at much of Let’s Be Cops. It’s made with heart, along with a simple desire to have some good, mostly innocent fun. If all you’re looking for is just that, then you’ll be satisfied with what you get here.

Still, I wouldn’t try this stunt at home.

Let's Be Cops Review
Let's Be Cops ultimately plays it safe for an R-rated comedy, but in a Summer full of weak, disappointing comedies, it at least succeeds at being funny.
CHARACTERS70%
PLOT70%
DIRECTION70%
THE GOOD STUFF
THE NOT-SO-GOOD STUFF
2014-09-17
70%Overall Score
Reader Rating: (0 Votes)
0%