If you’re excited to get a Halloween-themed gaming cleanse on early, and happen to own a Wii U, you’ll no doubt be interested in two uncommon Castlevania games coming to the Wii U Virtual Console next month! 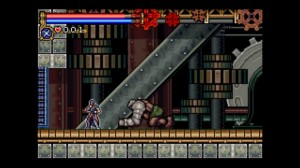 For the first two weeks of October, Konami will be offering two non-canon, but still prized Castlevania entries for Wii U owners; Castlevania: Circle of the Moon, and Castlevania: Dracula X. This will be the first time that either game has been made available on any digital storefront, without having to poke around online shops and second-hand vendors in the hopes of finding either cartridge.

Castlevania: Circle of the Moon was a Game Boy Advance launch title back in 2001, one that was received very well by critics and fans, even if its story is not considered canon in the overarching Castlevania timeline. Players control Nathan Graves, the son of two vampire hunters that perished in the attempt to banish Dracula, Lord of Vampires and Prince of Darkness, who is too late to prevent the resurrection of his nemesis by Dracula’s loyal minion, Camilla. The game unfolds in an open-ended action-adventure style, with light RPG elements, and allows players to dictate their stats and abilities with magical cards that they can equip in various combinations.

Castlevania: Dracula X is a North American re-imagining of Castlevania: Dracula X – Rondo of Blood, originally only released in Japan for the Turbo CD, though it has since been made available in North America, as an unlockable extra in its remake, Castlevania: The Dracula X Chronicles for the PlayStation Portable, and as a downloadable release on the Wii Virtual Console. Being made for the Super NES, Castlevania: Dracula X shares a premise with Rondo of Blood, with both games having players assume control of vampire hunting descendant, Richter Belmont in a bid to destroy Dracula after his latest resurrection, though its level design is almost entirely different from its Turbo CD inspiration, and the open-ended elements of the Turbo CD game are removed. 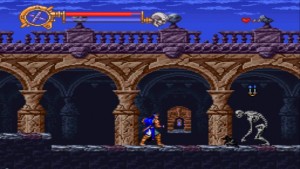 Castlevania: Dracula X will release first for Wii U Virtual Console, on October 2nd. Castlevania: Circle of the Moon then releases the following week, on October 9th. Both games will be priced at $7.99 each.

Keep whipping back to Eggplante for all news and updates on the Castlevania series.