“Chocolate Milk” is one of the best episodes that Brooklyn Nine-Nine has ever produced, and given how funny this show can be at its best, that’s saying quite a lot!

This is a superb example of an episode with no real weak links. Even the smaller plots worked brilliantly, and it never felt like there were any gags that fell short. It even featured a very loveable foil for Captain Holt (even moreso than Peralta), in the form of Kyra Sedgewick’s new Deputy Police Commissioner, Madeline Wuntch. This is a great character that the show hopefully brings back for more hijinx soon.

The main plot of the episode puts the spotlight on Sergeant Jeffords, who announces that he is having a vasectomy. When Peralta volunteers to help out, Jeffords designates him as simply a, “Work friend”, and not someone who can feasibly deal with his surgical procedure. Nonetheless, Peralta does what he does best and forces himself into the situation, simultaneously using a stabbing case as a means to intrude on Jeffords’ affairs. 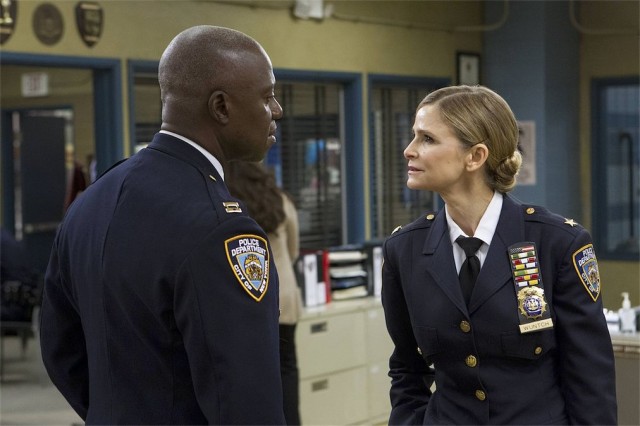 Once again, Terry Crews was in excellent form here, particularly after it’s revealed that the doctors didn’t have enough anesthesia to actually put Jeffords out, leaving him in a drugged-up state and simply having to try again tomorrow. Crews sells this brilliantly with some really funny lines, including a running declaration that Peralta has a small head, but where the episode really becomes interesting is when he confesses to Peralta that he doesn’t want the procedure. In a desperate effort to be, “That friend”, Peralta then tries to do what he has to in order to convince a later-sobered Jeffords that he actually doesn’t want to get snipped.

As much as this simply involves Peralta being as over-the-top and irritating as possible, which Andy Samberg continues to make loveable and charming somehow, the resolution actually felt very satisfying, wherein Jeffords confesses that he’s simply conflicted about the procedure, and needs to think it over more. It wasn’t any kind of cop-out 180, and it made sense, given Jeffords continually changing his answers, depending on his state of mind. It was also hilarious when Jeffords finally declares that Peralta is indeed, “That friend”, then ends the episode by giving him a “gift” of a box of carrots, and trying to force-feed them to him. Peralta then declares that he hates being Jeffords’ friend for big laughs. Be careful what you wish for, Peralta!

Over on the B-Plot, Kyra Sedgewick’s guest character is tormenting Captain Holt with an evaluation of the precinct, following some unknown grudge. The implied history between these two is as rich as it is interesting, particularly when they recount out-of-context incidents to each other, while Amy still desperately tries to seek the approval of someone who is clearly slanted. Her continued prying about the grading system was quite funny, and Melissa Fumero’s big laugh came when she made an initially eye-rolling joke about failing recess, but then sold it with her snarky recollection of, “Teachers need a break too, Amy!” Brilliant stuff.

Again, I really hope that Kyra Sedgewick makes a return to the show at some point, because her over-the-top stickler portrayal of Deputy Commissioner Wuntch was bang-on. Her verbal sparring with Andre Braugher was another episode highlight, particularly given some red herrings in their backstory (including that Wuntch once tried to seduce Captain Holt right as he confided in her that he was gay), and the best was the implication of a certain, “Derek Jeter Incident.” We don’t know exactly what happened, but it’s almost funnier when it’s left to the viewer’s imagination, even if this incident coming back in a future episode for a proper reveal would no doubt be awesome.

The resolution of Holt swallowing his pride and trying to appease Wuntch for a merely mediocre score in the end also felt believable and equally satisfying. It also led to a sweet shared moment between Holt and Amy, whereupon Holt gives Amy a literal “A” for effort, only to have Amy asking whether the system includes pluses and minuses. Again, very funny stuff!

Lastly, Boyle was surprisingly given the C-Plot this week, though it was still quite a good one. Forced to find a date for his wife’s engagement party (oh, Boyle, never change!), Boyle starts trying to beg both Diaz and Gina into going with him. His meeting with Gina in the bathroom, whereupon the two finally acknowledge that they’ve resigned themselves to a casual undercover affair, was superb, particularly when Gina slaps him towards the end and says that she didn’t hit him for using the phrase, “Knocking boots”, but cannot abide by, “Bone Bros.” These two really are a great couple-in-the-making, even if also a delightfully twisted one. 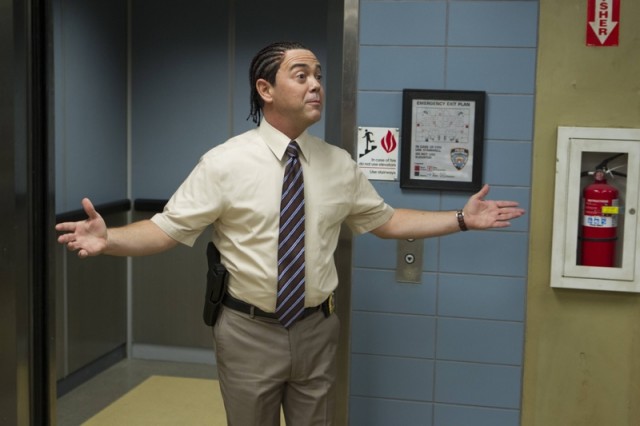 Again though, this ultimately led to a sweet and satisfying resolution. Diaz eventually blows off the date that she initially had on the day of the party to wear a ridiculous dress that goes with Boyle’s nightmarish corn rows, as this engagement party apparently has a Jamaican theme. Why not? It was a great moment of Diaz still wanting to help a friend, and not just simply being “Diaz” about the situation, and the declaration that she was helping Boyle move out of his ex-wife’s basement and find his own place leads to some great promise for episodes to come. Thankfully, the laughs still came here though, as Boyle started describing the party to Diaz in response to her kind offer, only to have Diaz consistently rolling her eyes and groaning in disgust. She doesn’t seem to be far off when she describes the party in advance as a Jamaican Hell Chamber.

“Chocolate Milk” is Brooklyn Nine-Nine at its best, and its best is some of the best comedy on television right now! It was frequently hilarious, consistently satisfying, and left all sorts of promise for episodes to come.