Nintendo has clarified what early purchasers of their Amiibo line of NFC figurines can look forward to for the rest of this year. The first batch of collectible and playable Wii U accessories will launch on November 21st in North America, alongside the first game that will boast compatibility with them, Super Smash Bros. for Wii U. Europe will then receive the first Amiibo figurines the following week, on November 28th. 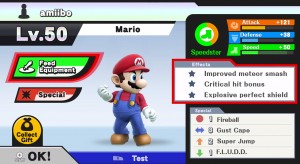 Amiibo figurines resemble the augmented reality collectibles of games like Skylanders and Disney Infinity. They can be scanned with the built-in NFC reader of the Wii U Gamepad, in order to unlock new benefits in certain compatible Wii U games. What each figurine unlocks will no doubt vary between Wii U games. Along with Super Smash Bros. for Wii U being the first game to support them, Amiibo support is also planned to be patched into Mario Kart 8, and will also be featured in this December’s Captain Toad: Treasure Tracker. Mario Party 10 and Yoshi’s Woolly World will also boast some sort of Amiibo functionality next year.

While existing models of the 3DS and 2DS don’t support Amiibo functionality, Nintendo has announced the ‘New 3DS’ and ‘New 3DS XL’, which will add, among other things, the ability to scan Amiibo figurines with the handheld. Japan will be getting the new handhelds this year, along with Australia, though North America and Europe won’t be receiving them before 2015 by the sounds of things. 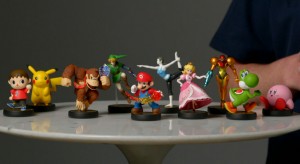 Keep scanning Eggplante for all of your news and updates on Amiibo.