After speeding out of the gate with an excellent first episode, The Flash continues to impress with its second episode, aptly dubbed, “Fastest Man Alive.”

Naturally, the show wasted no time setting up new complications for Barry’s powers. Even Barry himself cheekily skipped his opening dialogue with a winking line about people knowing the score by now. This is a show that is obviously bursting with confidence then, and for good reason, as it’s easily one of this Fall season’s best new shows!

Ironically, despite Barry now being The Fastest Man Alive, he still seems to be late for his professional duties all the time. This causes some strain with Detective West, who tries to claim that it’s not in Barry’s best interests to keep putting his life on the line as some kind of superhero. Go figure. This leads to Barry pulling a Spider-Man and trying to drive away Detective West’s concerns by declaring that West is not his father. 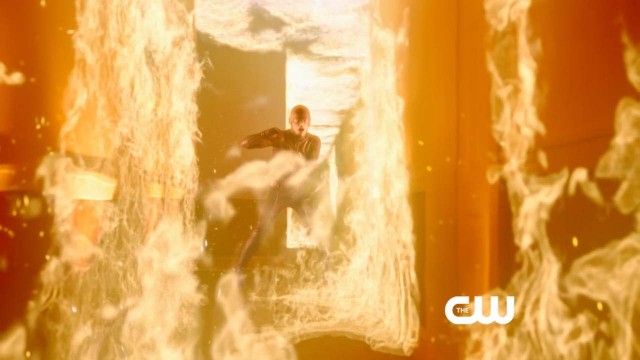 As much as this schtick feels forced and far too similar to the tragic Uncle Ben/Peter Parker dynamic in Marvel’s Web-Slinger stories, I must admit that Detective West is nonetheless a great new addition to The Flash’s mythology. Seeing West’s legitimate concerns about Barry overestimating himself and his abilities be met with open hostility, and yet never looking at Barry with anything less than love in his eyes, was something that continually resonated very effectively. This also made it nicely uplifting when Barry makes peace with Detective West at the end of the episode, saying that West may not be his father, but he’s still the man who fed him and clothed him and looked after him, and that makes him just as much a dad as his actual father.

This also called back to another flashback sequence, where Barry is prevented from seeing his father at Iron Heights Prison, and continually tries to run away so that he can sneak to him. In the end though, Barry learns that it wasn’t West that was keeping him from the prison, it was Barry’s father himself, since he didn’t want his son to see him as a defeated prisoner. This makes for another uplifting emotional moment when you tie it back to Barry’s speech to his father about being proud to be his son in the pilot episode.

If there’s one thing The Flash is really doing right then (though there’s many things that the show is doing right at this point!), it’s having tons of heart. As much as some of the Flash mythology can get pretty crazy and abstract, with its heavy use of parallel worlds and timelines in the comics, the show feels successfully grounded and relatable despite that. Every character feels heartfelt and likeable, particularly Barry himself, who is such a free-spirited, upbeat and fun hero that you can’t help but root for him, even at his most careless and thoughtless.

The only characters that still feel a bit short-changed at this point are the villains, which continue to have the early Arrow issue of being shallow, half-baked villains-of-the-week. In this case, the show made a pretty sizeable contribution to the DC Television Universe by introducing businessman, Simon Stagg, the man responsible for inventing DC hero, Metamorpho, who has already been referenced on Arrow, with Stagg himself also being mentioned as one of Laurel Lance’s former law firm’s biggest benefactors on Arrow as well.

Frustratingly though, albeit effectively shockingly, Stagg is murdered by Harrison Wells at the end of the episode, declaring that Barry must be kept safe, after Stagg announces that he plans to capture and experiment on him. It feels like it’s way too soon for The Flash to have killed off a DC character as significant as Simon Stagg, but on the bright side, it continues to build a very effective mystery around Wells’ character. Could he be an evil Reverse-Flash, sent to change the past in order to better perfect Barry’s potential? Is he trying to alter the past to save Barry’s life in the future? Or, could Wells be an older Barry himself, interacting with his past self for some unknown purpose?

All of these questions mean that Wells is yet another great character that’s been invented explicitly for the series, and hopefully the intrigue around him continues to build as the show goes on.

Cisco and Caitlin also continue to be effectively presented on the S.T.A.R. Labs end, with Cisco being an over-eager sidekick to Barry’s exploits, while Caitlin is the wet blanket that nonetheless reminds the two of what’s at stake. The two are largely a comic relief double act at this point, though we did get the first acknowledgement of Caitlin’s “dead” fiance being Ronnie Raymond, who comprises half of DC superhero, Firestorm.

Speaking of Firestorm, a Firestorm antagonist served as another villain-of-the-week for this episode, that being Danton Black, a.k.a. Multiplex, who is out to kill Simon Stagg for letting his wife die in favour of lining his own pockets. Multiplex has the power to endlessly duplicate himself at the expense of some of his own strength, and this led to some really cool, budget-friendly action scenes that beautifully demonstrated Barry’s abilities, and limitations!

Unfortunately, Multiplex also appeared to bite the dust at the end of the episode, dropping to his apparent death, despite Barry trying to save him after their battle. It’s entirely possible that the death may have been faked, as the guy does have the ability to clone himself, but it was another annoying instance of a cool and pivotal villain in DC canon getting axed far too early. That, paired with the character’s shallow, uninteresting backstory, made him another forgettable, disposable villain-of-the-week and nothing else, when the character really deserves better. 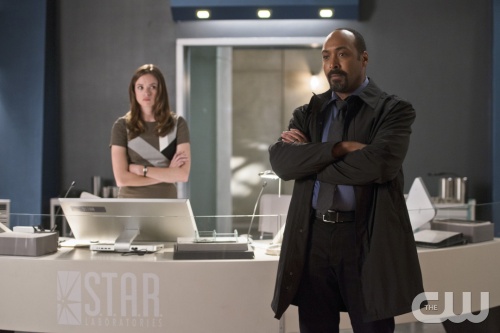 Beyond that, Iris West and Eddie Thawne still feel shoved into the background at this point, despite being series regulars and crucial Flash characters in the DC comics. Iris is still a cute presence, even if Candice Patton is playing her a tad too airheaded so far, but the show really needs to give her more to do beyond being a pretty, smiling face in Barry’s life. She’s supposed to be Barry’s main love interest, after all.

As for other incidents of note for Flash fans, the Cosmic Treadmill was introduced in this episode (though merely for benign speed-testing purposes), as was Barry’s dependence on eating constantly to maintain his steady metabolism, a la the DC Animated Universe. Before you bring up the Speed Force that powers the Flash characters in the DC Comics, bear in mind that the Speed Force may not necessarily exist in the DC Television Universe. We’ll have to see exactly how Barry’s powers work as the show continues to develop.

“Fastest Man Alive” continues to build on the same numerous strengths of the pilot, even if it hasn’t really done anything to address the tiny flaws that continue to linger from the show’s debut episode. When the pilot was as good as it was though, making par is certainly not a bad result for the second episode!