The title of this episode says it all. Gotham’s latest episode is all about the infamously ineffectual mental institution that Gotham City’s worst villains routinely get locked up in after being continually thwarted by Batman, only to break out soon after. In this case, “Arkham” turned out to be an entire district, which the Wayne’s were heavily connected to developing in the hopes of improving the city, including providing its deadly insane asylum. Arkham also happens to be a big plot of the city that the rival Falcone and Maroni families are currently locked in a feud over, one that is no doubt about to get bloody!

Yes, this is no doubt a huge key to the motive behind the Wayne murders at the start of the show, and this episode wasn’t shy about teasing that, while still giving no decisive indication as to who actually murdered Bruce Wayne’s parents at this point.

On an unrelated note, the mayor having a chart of the Arkham district that dubbed it, “Arkham City” was a neat nod to the acclaimed Batman video game, Batman: Arkham City. It was awesome to see Gotham finally acknowledge the ultra-popular Batman: Arkham games as something else that is inspiring its blend of styles, which have become as much a staple of Batman’s modern appeal as the continuing comic book saga, the recent cartoons, and the movies that the show has already borrowed most of its style ingredients from. With this episode, we see that the sign depicting Arkham Asylum is modeled virtually identically from the original Batman: Arkham Asylum video game as well, which is something that should make avid gamers smile, giving the Batman: Arkham series its own undeniable footprint in Gotham’s stylistic celebration of 75 years of Batman mythology.

Anyhow, Gordon gets another hint of something terrible being on the way from Cobblepot, who shows up on his doorstep unexpectedly, and continues to try and warn Gordon about the impending and inevitable mob war between the Falcone and Maroni families. It’s through Cobblepot that Gordon first learns about what is going on with Arkham, just as Bruce Wayne is also trying to follow the trail of breadcrumbs that will hopefully see his parents’ killer brought to justice. The fact that the young, bright Bruce was so easily able to bounce facts back and forth with Gordon was a great moment that teases Bruce’s future alliance with Gordon as the Caped Crusader. 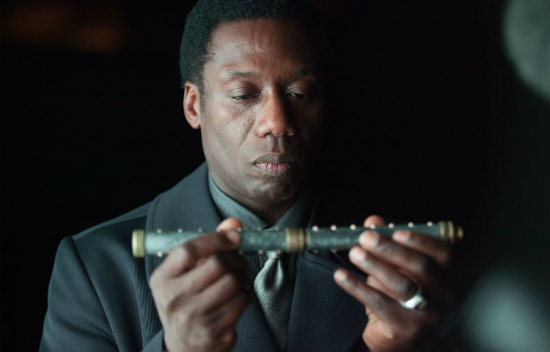 For most of the episode, Gordon and Bullock end up chasing a hit man, another villain-of-the-week with a unique way of killing his victims, in hopes of figuring out why councilmen are getting murdered. In this case, the original character, “Gladwell” has a strange rod that shoots spikes into people’s eyes and kills them (because Gotham City), and it seemed like another attempt to create a villain with some comic book flavour in what would otherwise be a dull, underdeveloped role. Gladwell hinted at having some interesting backstory, but, we didn’t really get to hear it, as Gordon and Bullock gun him down pretty aggressively upon Gladwell targeting the mayor.

Again though, it feels like Gordon and Bullock are too easily overshadowed by the villains of the show, despite the fact that Gotham tried to throw an early curveball with Barbara delivering an ultimatum about Gordon’s secret-keeping tendencies, and appearing to end their relationship. There’s a decent chance that it’s a fake-out, and honestly, it didn’t really amount to much, since Gordon and Barbara don’t have much relationship development at this point, despite the bomb dropped last week about Barbara once being in a lesbian relationship with Gordon’s colleague, Montoya. 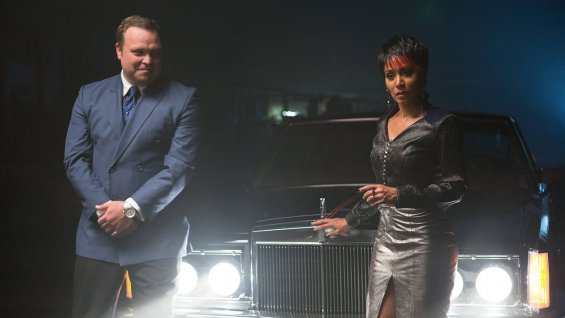 Instead, it was Cobblepot continuing to provide most of the interesting elements of this episode, despite the escalating animosity between the Falcone and Maroni factions. After apparently salvaging some of Maroni’s money during an apparent attack by armed gunmen sent by Don Falcone, Maroni promotes Cobblepot to being his restaurant manager, and teases another Penguin development by demanding that Cobblepot be given a suit.

What was great about this however is that Cobblepot planned the entire thing, hiring three goons to stage a mob attack, and then killing all of them with poisoned cannoli to erase the evidence. It was another awesome testament to his future ruthlessness and underworld business prowess as The Penguin, the high society super-villain that he’ll one day become.

As great a character as Cobblepot continues to be however, Fish Mooney also continues to steal the show, developing her own separate plan to usurp control of the city from the mob. She auditions a pair of girls for some unknown purpose, only revealing that they’re meant to be a, “Weapon”, asking them to both sing, and then try to seduce her. This opened up the interesting possibility that Fish may be bisexual, as she seems to have a clear opinion of what kind of women she finds sexy, even allowing the second one to full-blown make out with her in front of Butch, in turn suggesting that she may also be looking for a replacement lover, after disposing of her last one. Thankfully, Gotham didn’t forcefully clarify about Fish’s sexuality one way or the other, leaving this little nugget to have viewers ponder.

In any case, Fish’s story ending with the two women having to fight for the job was a potential throwback to the scene from The Dark Knight when The Joker makes two goons fight for a single henchman position, though this time, it had to be done with their bare hands. Fortunately, we actually got to see the fight this time, and watching the victor brutally bash in the head of her opponent for the win was both awesome and a little scary, albeit undeniably PG-13 for network standards. The woman, “Liza” ending the scene by simply walking by Fish and saying, “When do I start?” was a badass moment too, making me hopeful that, “Liza” will stick around for at least a few episodes.

“Arkham” teased some more interesting developments for the show, and delivered particularly exciting plots for Cobblepot and Fish Mooney, as well as the welcome establishment of Arkham Asylum in this new prequel universe. Gordon and Bullock could still use some better material, and the episode was dragged down a bit by a mostly uninteresting antagonist-of-the-week, but at least Gotham is continuing to effectively build itself into a very gripping new show.