The Big Bang Theory continued its positive momentum from last week with “The Focus Attenuation”, which stands as the best episode of Season Eight thus far! With the boys and the girls separated thanks to their own separate storylines, shenanigans inevitably ensued, and much entertainment resulted!

The main plot of the episode revolves around Leonard getting concerned that the men have become distracted because of their women. He proposes that the guys have a, “Scientific getaway”, so they can develop ideas that they’ve since abandoned after finding relationships. When Leonard announces this idea to Penny, she immediately rallies Bernadette and Amy to join her for a weekend of partying in Las Vegas. Go figure. 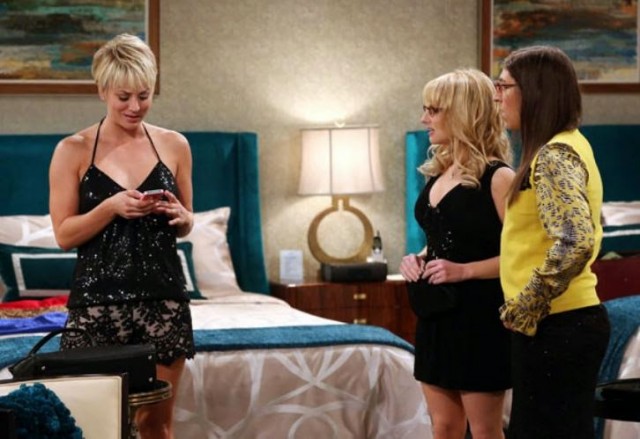 Or not? One of the reasons why this episode became so refreshing and funny is the role reversal that played out between the girls. Because an evaluation is moved up, Penny decides to be responsible and study, despite Bernadette and Amy getting massively drunk and constantly begging her to party with them.

This storyline was a huge success for two big reasons. First, it demonstrates that Penny is maturing and is trying to take responsibility for her life, particularly considering her engagement to Leonard. She doesn’t want to be dead weight, or a trophy. She wants to stand on equal footing with her future husband in terms of making a living, and seeing her make a hard effort and seemingly reject her old, irresponsible ways is a huge moment for her character.

The second reason why this storyline works so well is plain and simply due to the fact that a drunken Bernadette and Amy interacting with each other, and a fully sober and studious Penny, is absolutely hilarious! Melissa Rauch and Mayim Bialik really brought their A-game to these jokes, and it was awesome to see them being the bad influences for once. Both characters were delightfully goofy and off-kilter, and it was refreshing to have them go the entire episode without ever mentioning their guys, which is something that can drag down the comedic potential of the episode plots that center on the women.

Over on the guys’ end, the episode was still plenty amusing, having the group (even Sheldon!) continually get distracted when trying to find ideas to develop. It was a bit strange to see Sheldon not nagging the group about their lack of work ethic, as he is wont to do, but it’s difficult to care for long, since Sheldon was as funny as any of the characters this week.

The tangents that the guys went on were great fun too! The attempt to figure out how Biff influenced 2015 with the sports almanac in Back to the Future Part II was very amusing, and Leonard attempting to keep the group on task by migrating them to his lab only made things worse. Equally ineffective was a ‘positive punishment’ idea where the guys put duct tape on their arms, which would be ripped off every time any of them got distracted. This merely led to a discussion about Bill Murray mis-using the term, “Negative reinforcement” in Ghostbusters, which led to Leonard chastising the group for wasting a night of work to watch Ghostbusters on a crappy laptop… Which results in the guys watching the movie back at Leonard’s place, content.

“The Focus Attenuation” really brought the strengths of the show back to the forefront, and it felt like a welcome return to The Big Bang Theory’s prime episodes from around the start of the decade. There was great character growth on the girls’ side, especially with Penny, and the boys effectively combined geek-friendly jokes with practical humour about goofing off and being distracted by women and other outside factors. The series may be a bit aged by this point, but this episode effectively proved that it can still stand among the best comedies on television when it really puts its best foot forward!

The Big Bang Theory 8.5: "The Focus Attenuation" Review
"The Focus Attenuation" currently stands as the best episode yet for Season Eight, presenting some enjoyable growth for Penny, and the guys delivering high-quality nerd humour amidst their inability to stay on task!
THE GOOD STUFF
THE NOT-SO-GOOD STUFF
2014-10-14
86%Overall Score
Reader Rating: (1 Vote)
81%