You likely didn’t notice it over the weekend, but Rockstar Games has delivered a very cool anniversary surprise for Xbox gamers! In commemoration of 2014 being the tenth anniversary of fan-favourite Grand Theft Auto game, Grand Theft Auto: San Andreas, Rockstar has quietly re-released the game in an updated HD incarnation for the Xbox 360 Games on Demand service!

As a result, the digital Xbox version of the game that was previously available to download for $14.99 on the Xbox 360’s Xbox Originals catalogue has been removed from sale. Fortunately, this shouldn’t be an issue for most, as the improved HD version of Grand Theft Auto: San Andreas is far cheaper, currently selling at a highly discounted price of $3.74 for Xbox 360 owners. Sadly, even if you already bought the Xbox Originals download, you’ll need to re-purchase the game to play it on Xbox 360. This shouldn’t be too much of an issue though, as it’s on sale for chump change.

While the re-release was meant to be a complete surprise, there were some vigilant fans that noticed Rockstar removing Grand Theft Auto: San Andreas from the Xbox Originals catalogue early. After that, a leaked list of the game’s achievements made the rounds online, with Rockstar making the game official and simultaneously releasing it over the weekend.

On top of adding in 720p HD support and achievements, Grand Theft Auto: San Andreas also supports improved draw distance in its Xbox 360 re-release. Another big addition that Rockstar surprisingly didn’t draw attention to is the fact that the new Xbox 360 version now supports mid-mission checkpoints and instant retry prompts as well, eliminating one of the game’s most common criticisms, whereupon players must routinely drive a large distance around the city to re-start a mission every time they fail it, continually wasting a bunch of time that the player may not have.

So far, this new HD version of Grand Theft Auto: San Andreas appears to be exclusive to Xbox 360, or at least a timed exclusive on Microsoft’s console. A PC release may also be imminent however, as the original version of the game has been removed from sale on Steam, even if its page still remains. To price match, the original PS2 Classics version of the game is also currently being sold for just $3.99 on PlayStation 3, though so far, it doesn’t look like Sony’s console may be getting the HD re-release. 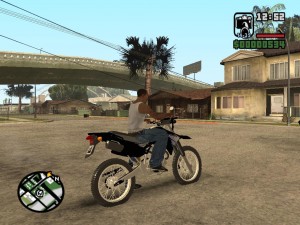 Grand Theft Auto: San Andreas stars Carl ‘CJ’ Johnson, a man that returns to his former gangland stomping grounds in fictional burg, Los Santos (also the setting of the most recent series entry, Grand Theft Auto V) to bury his dead mother. Forced back into his old ways against rival gangs and corrupt cops, CJ must restore the name of his former crew whilst simultaneously making sure that his home is never threatened again.

The game was originally released in 2004, as a timed PlayStation 2 exclusive, before being ported to Xbox and PC the following year, and eventually migrating to Mac in 2010. Rockstar released a previous HD revamp of Grand Theft Auto: San Andreas for iOS, Kindle and Android last year as well, which saw a port to Windows Phone at the start of this year, and most recently expanded to Amazon Fire TV this past May.

Keep skidding back to Eggplante for all news and updates on the Grand Theft Auto series.