After spending the entirety of Season Two imprisoned in S.H.I.E.L.D.’s basement, Ward took center stage this week, as his apparently sadistic and manipulative older brother, Christian goes on the warpath against S.H.I.E.L.D. After a vicious attack on the U.N. that is carried out by S.H.I.E.L.D. impostors that are actually HYDRA goons, Senator Ward uses it as a platform to push forward an anti-S.H.I.E.L.D. proposal that would see all remaining undercover S.H.I.E.L.D. agents be able to be shot and killed by any country’s government on sight.

Seeing as General Talbot happened to survive the U.N. attack, and happens to know (albeit without real proof) that the attackers weren’t actually S.H.I.E.L.D. agents, he decides to tip off Coulson, realizing that, as much of a jerk as he can be, he can’t persecute Coulson’s group for something that they clearly didn’t do. 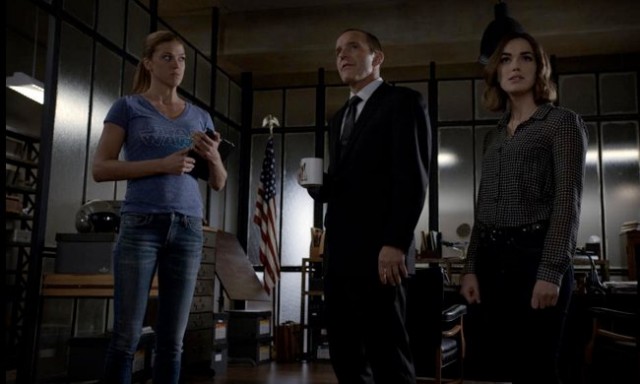 It seems that Skye’s father and Dr. Whitehall have worked fast since their team-up from last week (even if both were absent this episode), as they’ve already weaponized The Obelisk/The Diviner, putting disintegrating disc projectiles into the hands of the team of HYDRA mercenaries that carried out the U.N. attack, who are led by Marcus Scarlotti. That name may be familiar to Marvel fans, as it’s based around Mark Scarlotti, the original Marvel Comics version of Iron Man villain, Whiplash (sometimes known as Blacklash), before the character was rebooted in the comics as Anton Vanko, taking more after the traits of Mickey Rourke’s villain, Ivan Vanko, who was supposed to be the Marvel Cinematic Universe version of Whiplash in Iron Man 2.

Thus, this seems to be the first instance in the Marvel Cinematic Universe where two different villain variations have both appeared, even if neither were actually referred to as ‘Whiplash’ at any point. While Scarlotti doesn’t seem to have any affiliation with the still-imprisoned Justin Hammer, nor does he have any kind of armoured suit or anything, he does have a knife that extends into a whip-like weapon, which he uses against May in a fantastic fight scene during the episode’s climax. Since the episode also ends with Scarlotti and his surviving mercs captured by Talbot, it does at least leave the door open for another Whiplash portrayal in the future, unlike with Ivan Vanko, who was killed off at the end of Iron Man 2.

Anyway, before that action-packed excellence, the group splits up to try and save the world’s hiding S.H.I.E.L.D. assets, with Coulson going to appeal to Senator Ward directly, Skye going to interrogate the imprisoned Grant Ward for more intel, May, Bobbi and Hunter going to get intel on the disintegrating disk weapons from the man who actually developed them from the alien relic, and Fitz and Simmons staying behind to look for any evidence of the attack on HYDRA’s stolen hard drive from last week.

Every interaction in the episode worked perfectly, whether it was Bobbi and Hunter finally hashing out their failed marriage (which was as playful as it was clever), Skye and Ward exploiting each other’s feelings to get what they wanted, and Coulson striking a compelling deal with Senator Ward to save his fellow agents. Even though they didn’t directly interact, the Ward brothers also delivered their own indirect rapport, with both blaming the other as being a violent, dishonest sociopath that can’t be trusted. Still, Christian didn’t betray and kill many of his apparent friends, which leads to Coulson agreeing to turn over Ward to his older brother for public denouncement of HYDRA, and executing Ward for his crimes, which would give the elder Ward brother plenty of political pull to gain.

On that note, while Ward initially appeared to have the upper hand over Skye’s desire to deal with her family demons more than once, Skye quickly turned the tables on him to trick him into a false sense of security, leading to him spilling all of his remaining intel for Coulson’s team, right as Coulson is ready to ship him to Christian’s custody. This led to one of the season’s coolest moments yet, a montage set against Christian making the speech that exonerates S.H.I.E.L.D. of the U.N. attack, and condemns both his brother and HYDRA, while Ward has to face his former companions one by one as he’s marched out, all giving him their final glares of disgust and disappointment. His final attempt to plead with Skye was a particular highlight, with Simmons standing directly in front of Skye and saying in no uncertain terms, “If I see you again, I’ll kill you.” Wow. Simmons has certainly grown a pair since Season One, that’s for sure!

As you can predict though, Ward doesn’t go quietly in the end, with the episode concluding on Ward taking out his holders and escaping. That’s probably not good for Coulson’s team, and it’s bound to haunt them in future episodes. Thankfully though, Ward is one of the characters that has improved most since Season One, so it’s great that the show isn’t getting rid of him quite yet.

The rest of the episode hit the beats you would expect, though the show’s darker tone in Season Two is pretty apparent. After May, Bobbi and Hunter manage to walk out of the meeting with the Diviner Disks’ designer, they ultimately fail to save the S.H.I.E.L.D. team at the safe house, despite Scarlotti and his group getting captured. It’s great to see that the show still carries a lot more weight than it did in Season One, and another big improvement that the series continues to display in Season Two is the fight scenes. The big scrap in the safe house with the three agents was excellent stuff, especially the May/Scarlotti fisticuffs, and the fight choreography has really come a long way, with a highlight moment being when Hunter turns a HYDRA merc to ash, right as Bobbi leaps through the disintegrating goon to take out another. Damn. That was cool!

Another weightier interaction came with Simmons attempting to talk with Fitz. Fitz calling Simmons out directly on her lying and leaving led to her walking away again, only to be confronted by Mac later, who told Simmons bluntly that she’s just running away again. Fitz still needs her, and even if their dynamic has changed, Simmons still needs to make it right. It’s another way that Fitz and Simmons have both become more complex and interesting characters in Season Two, and it’s great that the show hasn’t just swept Simmons sneaking off to go undercover with HYDRA under the rug. Thankfully, it didn’t entirely demonize Simmons either, with Simmons being more misguided than malicious, believing that she’s slowing Fitz’s progress by being around him, even if the opposite may actually be true in the end.

“A Fractured House” is yet another very strong episode of Agents of S.H.I.E.L.D. that continues to demonstrate how much the show has improved with its storylines, action and general content. With Ward now on the loose and HYDRA now mastering their new alien toys, along with a final scene in a tattoo shop that shows that someone else has the compulsive map of the GH formula, things are about to get worse for Coulson’s team, but that should continue to lead to better, weightier stories than the show could have ever hoped to deliver during its debut last year.

Agents of S.H.I.E.L.D. 2.6: "A Fractured House" Review
"A Fractured House" delivered another very strong conflict thanks to the Ward brothers, continuing to maintain the series' much-improved action and drama all the while.
THE GOOD STUFF
THE NOT-SO-GOOD STUFF
2014-10-29
90%Overall Score
Reader Rating: (0 Votes)
0%