After last week’s episode, “Corto Maltese” felt a tad uneven in its exploration of the Thea/Malcolm training regiment, “The Magician” sadly continued the downward trend in quality from Season Three’s premiere this week. While still a decent episode, “The Magician” ultimately felt like a slow-paced filler offering, simply laying the groundwork for episodes to come, despite the exciting return of Nyssa Al Ghul to Starling City.

Almost the entirety of the episode involved Nyssa suspecting Malcolm Merlyn after learning about Sara’s death, even when it’s plainly obvious from the very start of the episode that Merlyn has nothing to gain from killing Sara. Obviously, he didn’t do it, though it’s understandable that Nyssa has become enraged by the death of the woman she loved. Still, for such a high-ranking member of the League of Assassins, and the daughter of Ra’s Al Ghul no less, it’s a bit astonishing that Nyssa’s judgment gets clouded so easily, especially when she sees fit to lecture Laurel about discipline in the wake of grief. 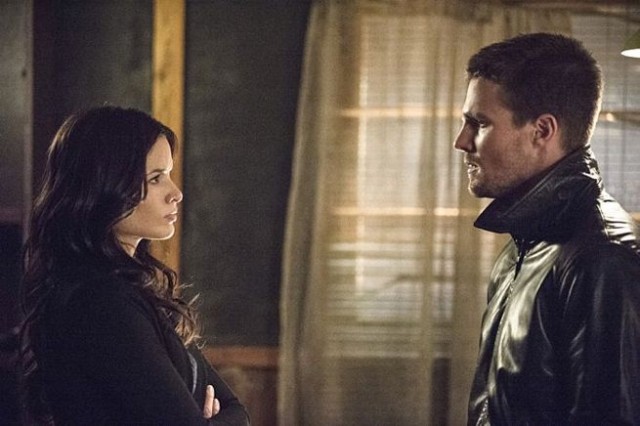 In any case, at least Nyssa was a great dramatic presence this week. Katrina Law was easily a highlight as the grieving Nyssa, as we see the more emotional side of the character come out, particularly when Oliver first delivers the news of Sara’s death to her. It’s this episode where we truly see just how much Nyssa loves Sara, particularly as she butts heads with Laurel over Sara’s past, as Laurel blames the League of Assassins as much as they both blame Merlyn. The reveal that Laurel’s inherited jacket was a gift to Sara by Nyssa was cool, as was her biting line that Laurel is not fit to wear it, after Laurel snaps at Nyssa when she tries to give Laurel her condolences at Sara’s grave.

Fortunately, there is also a satisfying payoff at the end of the episode on this note, where Nyssa visits Laurel as she trains in Ted Grant’s dojo, and the two make peace, with Laurel forgiving Nyssa for taking Sara into the League of Assassins, and Nyssa conceding that maybe Laurel does have her sister’s strength buried somewhere inside her. The moment concludes with Nyssa simply telling Laurel not to forget to use her hips when boxing, as that’s where the strength of her punches will come from. It’s a nice subtle way to demonstrate that Nyssa supports Laurel’s quest to better herself, and that there’s no hard feelings.

Another positive development in this episode also came from Oliver finally learning that Malcolm Merlyn is still alive, and faked his death during Season One’s finale. This also worked in his next interaction with Thea, where Thea is now the one keeping secrets, faking disbelief when Oliver thinks he’s giving her news by telling her that Merlyn is alive. This was nicely ironic, as Thea has given Oliver so much flak for being dishonest with his family over the first two seasons, yet now, she’s in the exact same position as he is, keeping her association with Merlyn a secret from not just Oliver, but also Roy.

Everything else in this episode just failed to pack the necessary punch though. The episode’s events mainly felt like a wild goose chase that ultimately went nowhere, with the heroes appearing disappointingly incompetent and hot-headed. Oliver’s first interaction with Merlyn since learning that he’s alive is supposed to be a big moment, but it simply involved Merlyn spelling out to Oliver what he should already know, and that the audience no doubt already knows; Merlyn has no motive to kill Sara, and killing Sara would only be bad for him, as it would mean needlessly pissing off Oliver and the League of Assassins (and especially Nyssa), all of which he’s trying to hide away from after Moira tipped them off to Merlyn being alive in Season Two.

The show also finally clarified directly that, yes, Merlyn’s Undertaking did indeed violate the rules of the League, and Ra’s Al Ghul has marked him for death because he did not directly sanction it. It’s still a bit of a mystery as to why Merlyn was allowed to roam freely from the League’s demands in the first place, but maybe that will be addressed in a future episode.

Even Thea’s big development this week felt inconsequential, with Merlyn helping her buy back the foundry from Queen Consolidated so that she could re-open Verdant. This basically means that Slade and Isabel taking the club away last season basically amounted to nothing. There may be some promise with Roy being her new assistant manager, but it only seems like a matter of time before that dynamic is mostly restored from Season Two as well.

This just leaves the Hong Kong flashbacks, which returned after being absent in last week’s episode. Even then though, “The Magician” did disappointingly little with them for the most part. Oliver kills a man under Amanda Waller’s orders, and he later finds out that it was the handler of Fyres from Season One. At the very least, we finally got confirmation that Waller was indeed the one that hired Fyres and targeted the Ferris Air flight, which is a tease that’s been mostly hanging since the end of Season One, though Waller’s plan felt blatantly reckless, considering that she’s the head of a top secret government organization, and her motivations felt a tad disappointing.

Apparently, Waller being behind the whole business with Fyres was simply to target that specific Ferris Air flight, lying to Fyres about being hired to de-stablize the Chinese economy, which is a questionable plan at best. The whole thing was a ploy to easily assassinate none other than China White, a character that appears to finally be coming back into play on Arrow. While it’s cool to have China White back on the show, even in flashback, Waller’s plan to murder a bunch of civilians just so she could kill one Triad leader felt like it was way too extreme, even for Waller’s standards.

In any sort of DC media, Waller’s a rough, no-nonsense character that is probably far too comfortable with writing off acceptable losses, but she never goes out of her way to make a mess, especially since, if she’s tracking China White’s movements to that degree, surely a more efficient assassination with far less collateral damage can be set up? This is all the more true when you consider that Waller is the head of A.R.G.U.S., and it makes no sense at all for her to blow up an American flight over Chinese territory, which would surely cause an international incident. Is China White really such a threat that you need to risk skyrocketing tensions between the U.S. and China over one Triad honcho, especially if Waller is found out by Chinese intelligence?! Even if you pin the incident on Yao Fei, the U.S. and China would still be at each other’s throats over it, and surely, that would create an even bigger mess for Waller to deal with that probably isn’t worth this haphazard way of getting rid of China White. 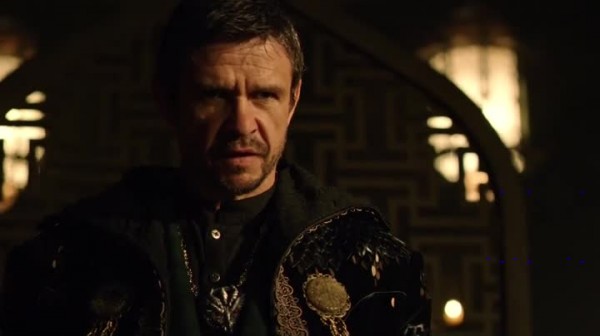 Essentially, Arrow just felt like it was in a holding pattern this week, whenever it wasn’t crowbarring plot developments to set up the next few episodes, regardless of how little sense they made. Felicity really had the better slice of events this week over in Central City with Captain Cold and The Flash, though it was at least cool to see Matt Nable’s Ra’s Al Ghul in the flesh for the first time at the very end of this episode, as he declares that Oliver has made an enemy of the League of Assassins by not only sparing Merlyn, but declaring that Merlyn is under his protection while he’s in Starling City. That was another plot stretch that felt like it was only there to force a conflict between Team Arrow and the League of Assassins, as well as make sure that Merlyn isn’t killed off, as he’s supposed to be Oliver’s arch-nemesis, particularly with John Barrowman now being a series regular this season.

Maybe, like one of Waller’s Ferris Air passengers, this episode’s shortcomings were acceptable losses to provide a better season later. Let’s hope so.

Arrow 3.4: "The Magician" Review
Arrow felt like it largely stayed in a holding pattern with "The Magician", with a barely consequential Malcolm Merlyn chase and no ground gained on Sara's murder.
THE GOOD STUFF
THE NOT-SO-GOOD STUFF
2014-10-30
70%Overall Score
Reader Rating: (0 Votes)
0%