The Flash contributed a huge new development for both the show and The CW’s shared DC Television Universe this week, setting the stage for a key group of Flash villains, and featuring a great guest appearance by an Arrow favourite that easily cemented this week’s episode as the best to date!

This episode followed the events of last week’s Arrow episode, “Corto Maltese”, which concluded with Felicity deciding that she wanted to take some time off to visit Barry in Central City. That’s exactly what she did in this week’s episode of The Flash, “Going Rogue”, with Emily Bett Rickards being a special guest star as she reunited with her old friend for a brief vacation. 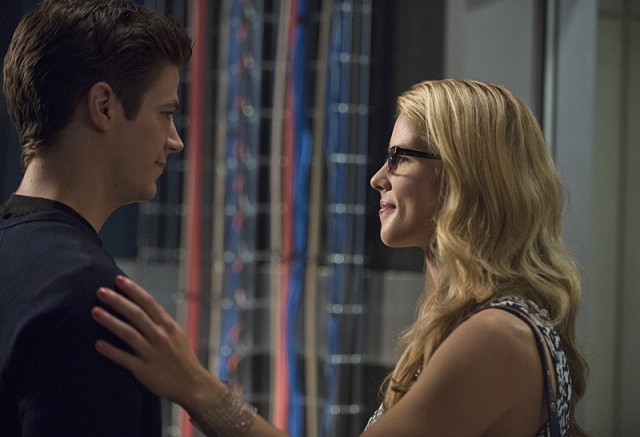 Few fans would argue that Emily Bett Rickards is one of the best parts of Arrow, and her dynamic was just as effective on The Flash. Felicity is fully aware of Barry’s super-speeding capabilities, revealing that she eavesdropped on Barry and Oliver during Barry’s seeking of Oliver’s advice during the pilot, and her reactions to Barry’s powers are absolutely priceless! Felicity is also introduced to Iris West, who decides to exploit a trivia night at her coffee shop to set Barry and Felicity up on a double-date with her and Eddie. This sequence is nothing short of adorable, since Grant Gustin and Emily Bett Rickards are such an amazing pair, almost making you wish that Felicity would stick around in Central City. Almost.

Felicity also ended up being introduced to Barry’s allies over at S.T.A.R. Labs, where she proved to be a both valuable hacking asset, and another smart mind that was apparently eyed by Harrison Wells. Wells also finally explained the reasoning behind Cisco and Caitlin being such young helpers, revealing that he believes in the responsibility of fostering young minds. Naturally, Cisco and Felicity got along swimmingly (especially after Barry blurts out that Felicity works with The Arrow), even if Caitlin was inevitably more suspicious and critical of her hacking skills and nosing into Barry’s affairs. The dynamic is about what you would expect, but it works, especially when Felicity speaks up about the scientific uncertainty of Barry’s powers.

Not only did Felicity actively assist in helping Barry stop the show’s latest villain, but on the train back to Starling City, we finally see a much-anticipated moment, where Barry and Felicity speak candidly about their unrequited feelings for Iris and Oliver respectively, then affectionately say that they will always be there to have each other’s backs. The two then share a kiss as Barry speeds off alongside the train to conclude the episode. It was a perfect end to a very inspired guest appearance by Felicity, and I do hope that she takes the odd time to revisit Central City every so often in the future! 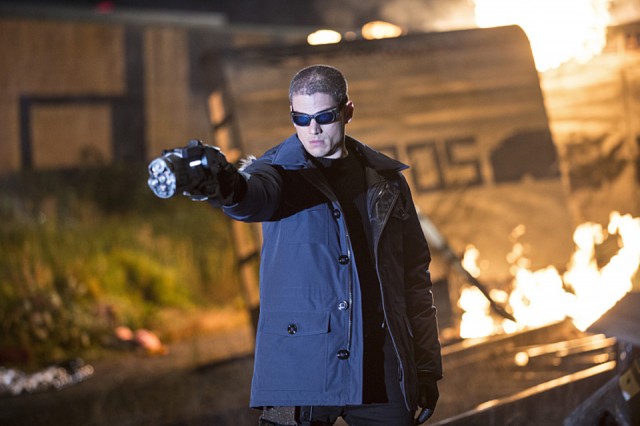 As awesome as it was to have Felicity on The Flash for an episode though, there was another element that made “Going Rogue” such a superb episode for an already superb new series, that being the first genuinely great recurring villain! Prison Break’s Wentworth Miller guest starred this week as Leonard Snart, a tenacious and detail-oriented jewel thief that has a run-in with Barry during a failed heist, though manages to get away with his men. After Snart gets his hands on a stolen ‘Cold Gun’ from S.T.A.R. Labs, he uses it to try and steal the diamond he’s after, whereupon he learns that his icy weapon can damage the so-called “Red Streak” of Central City. Fascinated, Snart decides to use the opportunity to try and rid the city of its new hero.

DC fans already know however that Leonard Snart is a major Flash villain from the comics, Captain Cold! Captain Cold’s freezing weaponry is not only a crucial weakness of Barry’s, but the villain also eventually founds and heads the organization of Flash villains known as The Rogues, which is what this episode’s title references. While The Rogues haven’t been formed yet, Captain Cold is already a force to be reckoned with by himself, taking out any police resistance with ease, and even being a clear and present danger to Barry himself, even with no metahuman powers! 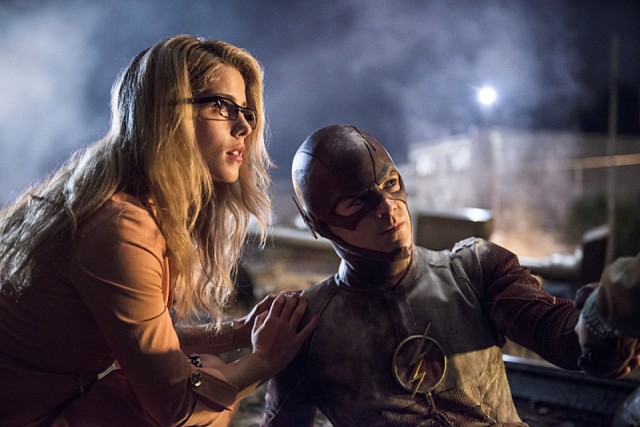 Miller not only gave Snart an incredibly appealing and menacing personality with more than a few cool tricks up his sleeve, but also realized the first truly good villain that the show has yet had overall. Some of his lines bordered on cheesy, perhaps as a nod to Captain Cold’s occasionally goofy personality in the comics, but even then, Miller made everything work wonderfully, even when he dons the character’s trademark parka at the climax of the episode. His altercations with Barry worked very well, with Barry even being haunted by a security guard that he fails to save from Snart’s Cold Gun, leading to a nice conflict that ties back to Detective West’s warnings from the previous couple of episodes.

The highlight however easily came when Snart tricks Barry into following him, believing Snart is trying to escape, before Snart derails a train with his Cold Gun and tries to make his actual escape. This leads to one of the most awesome sequences that the show has had yet, with Barry constantly speeding in and out of the bouncing, flipping train cars in slow-motion as he individually zips every passenger to safety. Even for television, this scene was amazingly shot and very ambitious, and the twist that Captain Cold even planned for Barry to succeed so that he could distract him and kill him made things all the better!

The only thing that may bug some here is that Cisco tricks Snart with a fake Cold Gun, leading to Snart just arbitrarily walking away. You could argue however that Snart saw through the ruse, and simply thought it would be more fun to dick with Barry another day, especially since he thanks Barry for giving him more of a challenge. The fact that he keeps the diamond may have felt like a loss, but for a villain this cool, it’s almost satisfying to have him walk away with his loot, and get another shot at Barry later. The ending tease with Snart getting back in touch with his old buddy, Mick, and giving him another stolen weapon that generates super-heated flames, should also get fans quite giddy for future episodes as well! 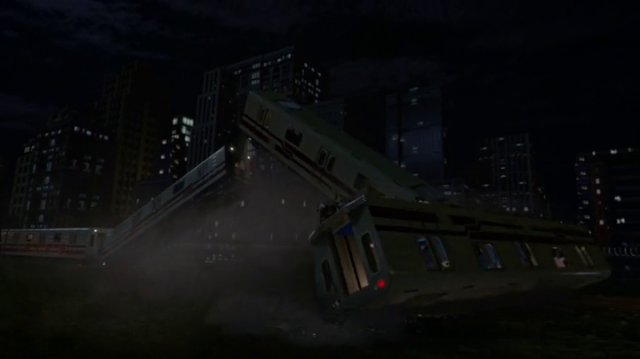 Captain Cold could not possibly have been represented better in his first appearance, and that’s fantastic for a show that has needed a truly worthwhile villain so far. The additional nugget of Cisco designing the Cold Gun secretly to stop Barry if need be was also a great dramatic touch that rippled across every character on Barry’s team, particularly since it leads to Wells somewhat tipping his hand as someone who’s getting pretty obsessed with Barry’s development going a certain way.

The only other plot element of note this week was Detective West responding to the revelation that Iris and Eddie are dating, with a blunt declaration to Eddie that he is his partner, not his friend, and the silent treatment for Iris. It initially felt like an overdone ‘overprotective father’ arc, but surprisingly and refreshingly, Detective West’s grief with Iris dating his partner was actually, brace yourself, reasonable!

Rather than just being a dick about it because that’s what TV dads do, Detective West eventually explains to Iris that he needs to be focused when risking his life as a detective, and now that there’s a part of him that sees Eddie as his daughter’s boyfriend, and not his partner, a part of him is now not focused. If something were to happen to Eddie, how would he look at Iris, and how would Iris look at him? Better still is that Detective West didn’t refuse to allow Iris to date Eddie, but simply admitted that the whole thing was hard for him, and he needed time to figure out how to accept it. 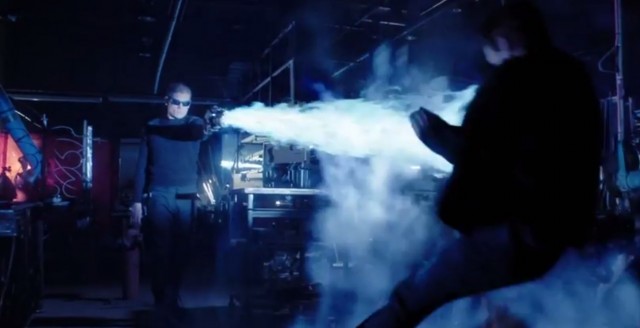 Detective West even came around a bit when Eddie defies his orders to stay put so that he can save Detective West’s life from Snart getting the drop on him, declaring that he’s his partner, not his assistant. It continues to nicely demonstrate that, while Detective West can be strict and protective, he’s not just arbitrarily like that. He simply cares a lot about the people close to him, and is just trying to look out for them in his own way. It’s further proof that he’s a superbly-written father figure, and one that makes sense, given Barry’s heroic heart.

“Going Rogue” was a busy episode with a lot happening, but every element of it was absolutely sublime! It’s this kind of outstanding quality that proves better than ever why The Flash is an easy contender for one of this Fall’s best new shows, if not the best!