NOTE: Apologies for the tardiness of this review. Brent was unavailable at and around the time of this episode’s airing, due to a personal family matter.

Constantine returned with a slightly re-tooled direction this week, namely with the introduction of a new female lead. Lucy Griffiths’ Liv is out, and Angelica Celaya’s Zed is in. DC fans who have read the Hellblazer comics published by Vertigo and/or DC Comics starring John Constantine may recognize Zed, as she’s a character from the printed panels that has served as both foil and love interest to Constantine.

Immediately, Zed feels like a more compelling female lead, as she has more interesting abilities, and has sort of a sassy, but honest spunk that makes her a more worthy companion to the often unpleasant mysteries and adventures that Constantine undertakes against the forces of Hell. The episode itself even seems to stress this in a sort of meta fashion after Liv’s departure, with Constantine trying to impress upon Zed that her very soul is a target in the battle against Hell, yet Zed seems undeterred from joining Constantine’s battle, if for no other reason than to figure him out.

Like in the comics, Zed has the ability to foresee the future, with aggressive visions that often compel her to draw them out as sketches. There’s even some actual Hellblazer comic cover designs in her apartment, which is a very cool Easter Egg! She’s independent, but also a little lost by the look of things, and her saddling up with Constantine isn’t in any way for protection, which is great, and another step up from Liv in the pilot. The character feels a bit underdeveloped in her first appearance, but she’s bound to get more backstory later on, so that’s mostly excusable for now. 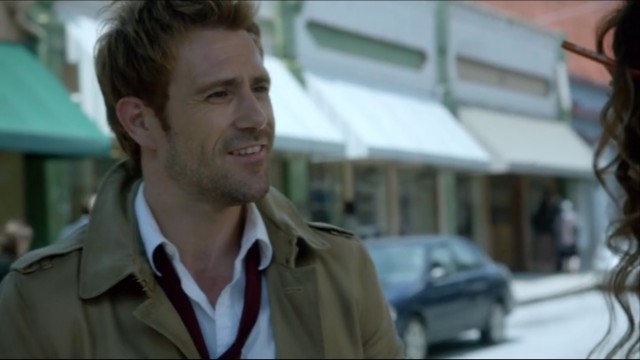 The mystery-of-the-week involved Constantine visiting a small mining town, where a miner is inexplicably immolated in his own shower. Naturally, Constantine sticks out like a sore thumb, and it’s cool that the show seems to be using his familiar trenchcoat/red necktie apparel from the comics to demonstrate that he doesn’t fit in well with most folks. Constantine ending up in a fight mere minutes after sneaking his way into the crime scene was also fun and humourous, illustrating well that Constantine is hardly by-the-book with his methods.

Naturally, Matt Ryan as Constantine continues to be one of the show’s biggest and best strengths. He continues to display the exact right balance between smug, reliable and snarky, and he’s still an incredibly fun hero to follow every week. Ryan’s banter with Angelica Celaya as Zed also works as one of the better character dynamics that the show has set up so far.

If there’s one gripe that some may have about this episode though, it’s that it feels like a slightly mundane sophomore episode with a mystery that’s far smaller in scale than that of the pilot. Constantine didn’t even deal with the forces of Heaven or Hell this week, ultimately contending with a minor ghost story that had some cool moments, but didn’t leave much of an impression.

Essentially, someone figured out a way to summon and weaponize the normally peaceful spirits of dead miners, who warn other miners of impending danger. The spirits themselves look pretty neat, being manifestations of loose coal and soot, but the explanation of why supposedly peaceful guardian spirits suddenly went bad is shaky at best. It turns out that the original late miner’s wife was behind everything, simply using gypsy magic that was somehow amplified by a coming darkness that Constantine alludes to, something that was also alluded to by Manny in the pilot. This is something that is bound to come up again later, and may continue to contribute to some smaller mysteries as the show continues to set itself up in its early episodes.

In any case, Constantine easily calms the spirits and dispatches their summoner, making the whole affair feel like just another day at the office for him, even if there were some pretty hair-raising moments, namely Constantine almost drowning in a car that was locked and gradually filled with mud by the ghosts. Zed manages to bail him out, even if she wasn’t fast enough to save the other captive, though Constantine claims that he had the situation under control. Mmhmm. I’m sure he did.

On one last note, this episode finally delivered some veiled showcases of Constantine’s well-known smoking habit from the Vertigo/DC printed panels. It was still network-friendly, being shown with quick cuts to flattened cigarette butts, and Constantine simply being about to smoke as the episode ends, but it’s a creative way to keep that element of the comics intact, without upsetting the NBC censors. It doesn’t look like the character will be pathologically chain-smoking on a continual basis, as he often does in the comics, but that reduction is no big loss, frankly.

“The Darkness Beneath” still managed to be far more interesting than your run-of-the-mill procedural, even if the show shed some of the impressive scale of the pilot storyline. Still, with the introduction of a promising new female lead in Zed, and Constantine himself still continuing to be a fantastic presence, the show still continues to evolve into a nice alternative genre offering for the NBC lineup.