Brooklyn Nine-Nine delivered another highlight episode this week with “Jake and Sophia”, an episode that introduced a fantastic new romantic arc for Peralta, as well as an equally superb new development for Amy. The Giggle Pig task force may have sat out this week, as did the repeated Holt/Wuntch rivalry, but this episode nonetheless fired on all cylinders with an outstanding comedy offering that stands alongside “Chocolate Milk” as Season Two’s best episode so far!

The episode begins with a great intro gag about Santiago being late to work for the very first time, and the group theorizing why she may be late. Naturally, it was Holt that was correct with his seemingly left-field guess of a bank issue. Is Holt ever truly wrong? This beginning sequence typically had nothing to do with the rest of the episode, but it was an inspired bit that set the excellent quality bar for this episode early.

From there, the episode goes into its main plot, detailing Peralta’s dissatisfaction with his love life. Apparently, Rosa’s friend didn’t work out, and all of his other dates have been boring. Jeffords suggests upping his game, motivating him to chat up Eva Longoria’s guest character, Sophia, whom he really hits it off with, and seems to be both his intellectual and personal match.

Peralta’s celebrations the next day are short-lived however, when he finds out that Sophia is a fill-in defense attorney for the criminal that Peralta nailed for an apparent diamond heist. This leads to a hysterical professional rivalry between the two, with Peralta’s typical workplace immaturity front and center. Fortunately, Eva Longoria did an impressive job of keeping up with Andy Samberg in these scenes, creating the beginnings of an awesome new Peralta romance that should be a staple throughout the season, or at least I’m hoping.

On this note, it was also fulfilling to see Peralta’s perp get a ‘Not Guilty’ verdict from Sophia’s case, though Peralta swallowed his pride and asked out Sophia again anyway. As immature as Peralta can be, it’s nice to see that he’s still an adult somewhere, or at least someone who isn’t stupid enough to throw away a great relationship over a petty office dispute. Sure, Jeffords needed to point it out to him, but at least he still made the right call in the end.

Over on the B-plot, Diaz complains to Holt about Scully being the precinct’s only union rep, and, as you can expect, Scully is extremely incompetent at the job. Diaz pushes for Santiago to be the new union rep for an upcoming election, where Scully (somehow) always runs completely unopposed, but Holt continually claims that he can’t get involved.

Santiago’s initial refusal to become the union rep seems a bit strange, as even Diaz points out that Santiago loves taking notes and organizing, but I suppose the B-plot needed some kind of conflict. She reasoned that being the union rep meant coming into conflict with Holt, but honestly, this reasoning felt pretty weak and forced. Thankfully, this did leave to some clever gags with Diaz, namely in coming up with Santiago’s election phrase, “Vote Amy, Dummies!”, and the final moment with Holt finally throwing up his hands was nice, as he finally called Santiago in for that, “Powwow” she always wanted. 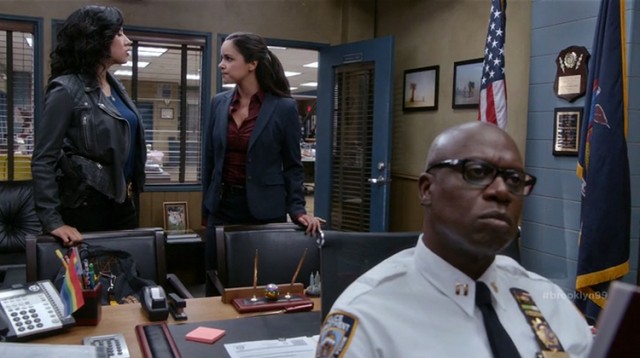 It was inevitable that Santiago was going to pull ahead of Scully and be the new union rep, and it was an inspired new direction. This mostly seems to bury the failure to launch that came with her prospective relationship with Peralta, which is thankfully being cast aside for the time being. Hopefully, that won’t come up again, unless the showrunners actually come up with something worthwhile to do with it.

Finally, Boyle and Gina continued to sort out the fallout of their fling, namely in feuding over a non-refundable luxury hotel room. Their attempts to undermine each other were predictably hilarious, particularly when they pretended to be each other’s equally bizarre idols to try and trick them into giving up their free time so they could take the room for themselves. Holt resolved the issue in a pretty amusing fashion as well, simply deciding to have Boyle and Gina both work on the day of their booking, so nobody won.

Another great surprise came in here, with both Boyle and Gina having the same idea of giving the room to one of their single parents. Boyle Sr. entered the room just as Mrs. Linetti also came in, seemingly sowing the seeds for yet another accidental romance in the wake of Boyle and Gina supposedly splitting up. It’s doubtful that Boyle and Gina will permanently be apart though, and the idea of their parents also hooking up should hopefully present promising ideas for episodes to come with these characters.

“Jake and Sophia” was an outstanding half-hour of comedy, and a superb episode of Brooklyn Nine-Nine. Every character arc was a winner, just about every joke hit with aplomb, and all sorts of promising foundations were laid for future episodes. No further questions.