Marvel ultra-villain, Doctor Doom may not be getting a gender-swap in Fox’s upcoming movie reboot, The Fantastic Four, but it would appear that fans will still need to swallow quite a few liberties with the character!

Toby Kebbell, who is set to portray the villain of The Fantastic Four, has shed some light on the character he’ll be portraying in recent interviews with sites like Comingsoon.net and IGN, whereupon he originally discussed portraying ape antagonist, Koba in this past Summer’s blockbuster hit, Dawn of the Planet of the Apes. First and most shockingly, is that the character won’t be going under either of his familiar monikers, and that’s just the beginning!

According to Kebbell, his Doctor Doom will not be Victor Von Doom (or Victor Van Damme, before you bring up Marvel’s Ultimate Universe), nor be called, “Doctor Doom” in the movie. Instead, the character will be an Eastern European computer programmer (it’s unknown whether Doctor Doom’s fictional country, Latveria will be his place of origin) named Victor Domashev, who is rather anti-social, and goes by the online handle, “Doom.” Kebbell made sure to emphasize that the script only ever refers to Victor as, “Doom”, and never as, “Doctor Doom”, making both of his comic book identities non-existent in the rebooted canon.

Needless to say, this raises a metric ton of questions about Kebbell’s portrayal of the much-beloved Marvel baddie and Fantastic Four arch-nemesis. It would indeed appear that on top of not having his comic book identity, Victor is nothing remotely resembling a powerful dictator either, as he is in the comics. This would also appear to fall in line with new Human Torch actor, Michael B. Jordan claiming that the movie will extensively re-tool the origin story of its title heroes, whose ‘costumes’ will be more along the lines of containment suits.

We still don’t have the full picture of Fox’s new plans for The Fantastic Four, but it would seem that they are indeed trying something radically different from both the comics, and their previous stab at adapting them into movies. 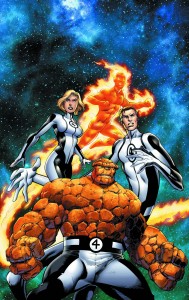 In Fox’s former Fantastic Four movies, Doctor Doom/Victor Von Doom appeared in both films as the main antagonist, being portrayed by Nip/Tuck’s Julian McMahon. In those movies, Doom was the rich and powerful CEO of a self-made company, Von Doom Industries, which sponsors the future Fantastic Four’s trip to outer space, where both they and Doom are bombarded with cosmic rays. Also being involved in the same accident that grants the Fantastic Four their abilities, Doom’s skin gradually turns into a super-dense metal, and he also gains electrokinesis. In the second movie, Doom ends up surviving his defeat by the Fantastic Four, and returns to his home country of Latveria, where his metal skin is cured, and he steals the power of cosmic entity, Silver Surfer.

We’ll see how Kebbell’s portrayal stacks up to McMahon’s when The Fantastic Four comes to theatres on August 7th, 2015.

Keep stretching back to Eggplante for all news and updates on The Fantastic Four.