Nintendo will be debuting their first wave of NFC-capable Amiibo figures towards the end of next week, with a second selection following in December. Not long after, a third wave is set to follow them as well, and Nintendo has just detailed which new characters will be part of it. 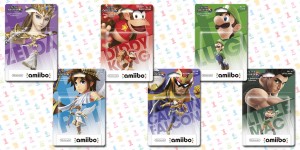 Apparently, some of these Amiibo will be exclusively sold from certain retail partners in North America. Unfortunately, Nintendo didn’t clarify which Amiibo figures would be limited to certain stores, nor which stores those may be.

As expected, these continue to fill in the roster of fighters featured in the upcoming Super Smash Bros. for Wii U, which will be the first Wii U game to support Amiibo functionality, and will debut alongside the first wave of Amiibo figures on November 21st. Mario Kart 8 is also having Amiibo support patched into it within the year, though only certain Amiibo figures will be compatible with it. Fortunately though, Hyrule Warriors is also getting Amiibo support patched into it shortly, and will allow any Amiibo figure to add bonus spoils for the player when scanned, with the Link Amiibo granting an exclusive weapon, The Spinner, for use in the game as well.

While the feature is so far primarily meant for use on Wii U, the New 3DS and New 3DS XL handhelds that Nintendo recently debuted in Japan, will have Amiibo support built in for the first time, allowing Nintendo’s portable games to potentially support Amiibo in the future. Super Smash Bros. for Nintendo 3DS is the first game to support Amiibo on the New 3DS and New 3DS XL in Japan, with other plans for Amiibo on the New 3DS handhelds currently unknown, particularly with no North American or European release plans yet made for the handhelds.

The third wave of Amiibo figures will arrive alongside Kirby and the Rainbow Curse in North America, in February 2015.

Keep scanning Eggplante for all news and updates on Amiibo.