During last year’s Spike VGX Awards broadcast, it was officially confirmed that Telltale, developers of narrative-driven adventure game sensations, The Walking Dead and The Wolf Among Us, would be developing a similarly-styled episodic adventure game based on George R.R. Martin’s ultra-popular Game of Thrones saga. Finally, after spending almost an entire year with the project shrouded in secrecy, Telltale has outlined what we can expect from Game of Thrones. 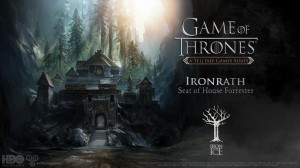 First and most interestingly, is the fact that Game of Thrones will deviate from the majority of Telltale’s game releases, sporting six total episodes, instead of the Telltale-standard five episodes. The first episode will be called, “Iron From Ice“, and as Telltale previously indicated, it will release before the end of this year. Given that we’re well into November now, it’s likely that we probably won’t see the episode until December, though Telltale has yet to announce a specific launch date.

Game of Thrones is also confirmed to inhabit the universe of the HBO television series of the same name, rather than the series of novels that inspired it. This is in contrast to Telltale’s two current seasons of The Walking Dead, which do not inhabit the universe of the popular AMC television series of the same name, and are instead set in the universe of the original comic book series. The game will also center on a faction that the show has never depicted (even if the novels have), House Forrester. This direction would be more in line with The Walking Dead, which stars an entirely different group of protagonists than the television show and comic books.

The premise of Telltale’s Game of Thrones involves House Forrester being embroiled in the War of the Five Kings, with the individual members of the house desperately trying to hold everything together. The episodic narrative will unfold from multiple perspectives, both House Forrester family members and servants spread across Westeros and Essos, rather than just having a sole protagonist like most of Telltale’s previous works, and will begin during the later events of the show’s third season. The story of the game will span all the way to shortly before the start of the fifth season as well, with players able to visit familiar locations from the show and novels, such as King’s Landing and The Wall, along with places that the show hasn’t currently depicted, namely Ironrath, the homestead of House Forrester.

The first episode’s title comes from the family slogan of House Forrester, which is spoken within Ironrath, an imposing fortress-like stronghold. House Forrester is well-versed in the harsh conditions of the North, making them especially sturdy, strong folks. House Forrester also happens to be sitting very close to a forest filled with ironwood, one of the largest in all of Westeros. Ironwood is a key commodity for ships, weapons and defenses in the Game of Thrones universe, in turn contributing to House Forrester’s power, to the chagrin of their rivals, House Whitehill. 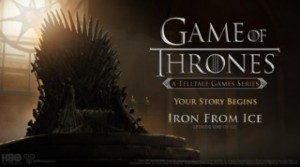 As with The Walking Dead in particular, any decisions you make across the five perspectives and six episodes will have far-reaching consequences, including the life or death of certain characters. This time however, your consequences are multiplied by five, due to the added perspectives. Telltale states that players truly will be playing the ‘Game of Thrones’, where you win, or you die.

Telltale also confirmed the planned platforms for Game of Thrones for the first time today. The game will be released for PC, Mac, Xbox 360, PlayStation 3, iOS, PlayStation 4, and Xbox One. Telltale also confirms that additional platforms will be revealed at a later time, perhaps suggesting that, as with The Wolf Among Us, the game may see a belated release on PS Vita, or potentially even Nintendo platforms, which Telltale used to develop for, but hasn’t touched since Back to the Future: The Game released on Wii.

This would also seem to cement that we won’t see Telltale’s other in-development project, Tales from the Borderlands, until next year at the earliest. Telltale is also developing a third season of The Walking Dead.

Be sure to keep invading Eggplante for all news and updates on Telltale’s Game of Thrones.