UPDATE: Avalanche Studios has dropped a few added nuggets of information about Just Cause 3, following its official announcement of the game today. Just Cause 3 will have a world map of about the same area mass as that of Just Cause 2, but will feature more vertical space to compensate, with an increased emphasis on players utilizing vertical movement and navigation. Avalanche also stressed that Just Cause 3 is, and was always planned to be, single-player-only, with no multiplayer elements whatsoever. It will also not have any sort of free-to-play business model or microtransactions, and will be a full-priced retail offering, as with the previous two games.

After a slew of rumours and speculation, Swedish developer, Avalanche Studios has finally come clean with the existence of Just Cause 3!

The highly anticipated open-world sequel has been in development for a while now, and is set to release as soon as next year. The announcement was made via a cover reveal of Game Informer magazine, which has Just Cause 3 gracing the cover, and the first details within the magazine itself.

Apparently, the game is so far along in development in fact, that some Game Informer editors were even allowed to sample a playable build for several hours. They confirm that Just Cause 3 will see considerable added refinement to the series’ trademark grappling hook and parachute controls, and will introduce a wingsuit for the first time. The game also takes place in a fictional Mediterranean archipelago, and it would seem that returning protagonist, Rico Rodriguez will remain the player character. Unfortunately, no specific plot details about Just Cause 3 are available at this time. 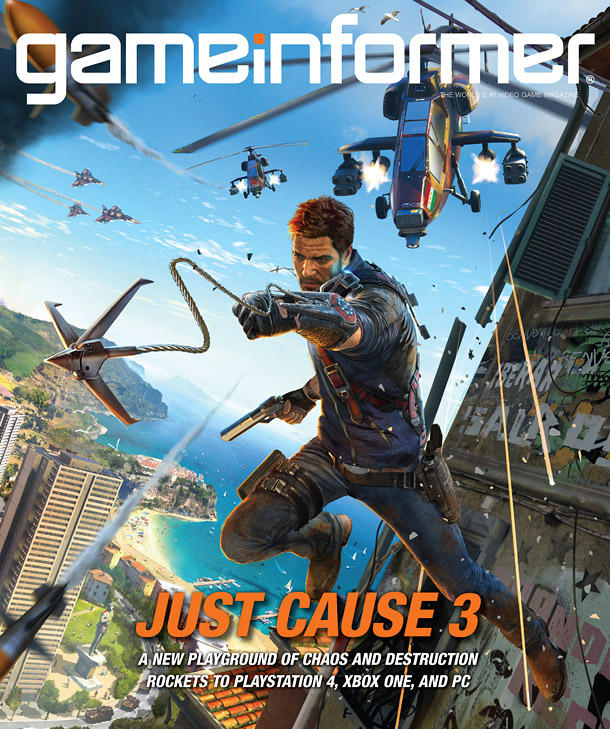 The Just Cause series hasn’t seen a new release since 2010’s Just Cause 2, which came to PC, Xbox 360 and PlayStation 3. Avalanche Studios has also been hard at work on a movie-inspired action game, Mad Max, which is headed to the same platforms, as well as PlayStation 4 and Xbox One, and was delayed out of this year. Avalanche Studios also claims to be working on a hot comic book-inspired game, with the only clue being that it’s not about Superman, though the status of this project is currently unknown, as it hasn’t been brought up in a while.

Just Cause 3 is set to release for PlayStation 4, Xbox One and PC, with Square Enix once again publishing the game. Unfortunately, it doesn’t seem to be planned for Xbox 360 or PlayStation 3.

Keep grappling back to Eggplante for all news and updates on Just Cause.