Another week, another tease of Batman antagonists to come. This time, “The Mask” laid the groundwork for not one, but two famous Batman foes, as the show went back to its regular case-of-the-week format, following the superb, groundbreaking episode, “Penguin’s Umbrella” from last week.

Fortunately, even if some of the old pressing issues with Gotham’s earlier episodes are back, it was nice to see that “The Mask” didn’t just ignore the huge events from last week. The GCPD officers are now visibly intimidated by Gordon, with Bullock sharply pointing out to Captain Essen that Gordon has reminded them all of what cowards they are, after his infamous stand-off against Don Falcone and Victor Zsasz during last week’s episode. 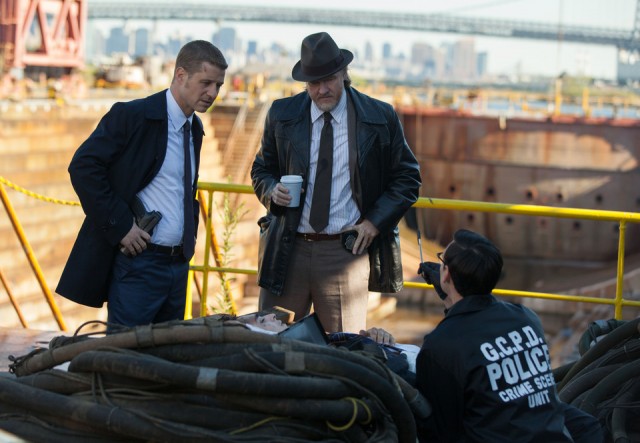 As effective as this fallout was though, it was all too brief, as another eccentric case took the forefront for this episode. After a man is found brutally murdered by office supplies, and in office wear, the evidence leads back to a secret office fight club at Sionis Financial, where new job applicants must fight each other for a position under the firm’s head, Richard Sionis. Yes, Richard, not Roman. Richard still wears a rather ostentatious mask though, so you can probably see where that’s probably eventually going.

Naturally, this is a tease for future Batman antagonist, Black Mask, a.k.a. Roman Sionis, with the fight club potentially being a prototype of the False Face Society from the Batman comics. Yes, the setup and execution of this idea is pretty silly after last week’s highly dramatic episode especially, even in a show about Gotham City, and frankly, this is the most ludicrous that the show has been since the especially bizarre episode, “The Balloonman.”

Before you inquire, no, Roman Sionis was not mentioned at all this episode, though it’s quite probable that Richard is Roman’s father, particularly with FOX already confirming that another Batman villain, Scarecrow will initially have his father filling that villain role on Gotham this season.

The show even seems to abandon the former Bruce Wayne material for an attempt at something different this week, having Bruce being forced to go to school. Oh yeah, he should be in school at that age, shouldn’t he? Anyway, Bruce quickly runs afoul of a mean-spirited kid with a fixation on death and gore, Tommy Elliot (yes, that Tommy Elliot!), so as expected, he really doesn’t take to being plunked into school very well, especially after the memory of his parents is blatantly insulted.

This was the more cool and successful of the two villain teases, as Batman fans would know Tommy Elliot as twisted, obsessive serial killer, Hush, one of the newer Batman villains in the comics. For now though, he’s just a rich punk whom Bruce eventually puts in his place with a hard beating on his own doorstep, complete with Alfred sanctioning the effort. This was interesting, as Alfred even approached Tommy directly, with a fantastic and badass line where he implores Tommy to remember Bruce attempting to beat him to death, and that Alfred allowed him to try. Damn. It probably would have left more of an impression than Alfred just calling the punk’s parents, or the school though.

I’ve said it before, and I’ll say it again, Sean Pertwee’s more rough and raw Alfred is one of the show’s most under-appreciated characters at this point. It was Alfred that surprisingly seemed to deliver the best moments this episode (with a close second by Bullock chewing out the entire GCPD precinct en masse for their treatment of Gordon), and the end of the episode did leave the door open for a very promising new development, whereupon Alfred agreed to teach Bruce how to fight.

Along with the Sionis case, we got some interesting material from the other characters, seeing the first interaction between Penguin and Fish Mooney after Penguin was revealed to be alive (notice how it doesn’t feel right to just call him, “Cobblepot” anymore?), seeing Edward Nigma poke around the morgue’s cadavers as a creepy hobby (and the most blatant Riddler foreshadowing yet), and seeing Fish Mooney tell a questionably honest story to Liza about her politics with men, after Liza declares that she wants out of seducing and likely killing Don Falcone.

As usual, Penguin seemed to stand out from the villains the most in terms of a great performance, once again having an impactful and frightening moment, where he took information on Fish Mooney from the man who took his former job, and then tells his henchmen that nobody can find the man’s body, and especially not Fish. Fish had some great moments this week too, but it’s hard to compete with the rapid rise to power that Penguin is now enjoying, especially when it’s becoming more and more likely that Fish won’t last at the rate she appears to be unraveling. She appears to be the mobster least in the loop, despite her own grand ambitions of unseating Don Falcone, and taking over his operation.

“The Mask” was still mostly good, though a tad more uneven, dimming the hot streak that Gotham has been on since “Viper” aired a few weeks ago. It feels like a filler episode, and another potential side effect of Gotham ending up with a full season order, though not that that’s a bad thing obviously. Still, it’s a sad fact that shows getting a big boost in episodes have to drag things out to accommodate the larger order of episodes, and disappointingly, “The Mask” went back to stalling and stumbling, once again strangely unsure of what kind of tone and narrative style that Gotham would want to pursue. 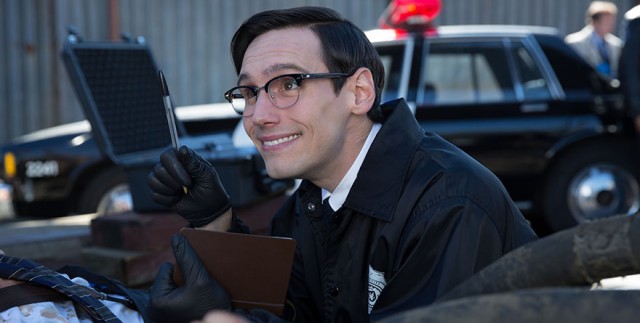 Most frustrating of all was that Barbara seemed to walk out on Gordon, again, despite coming back to Gotham City just for him last week, even when she had absolutely no reason to do so. Seriously?! Gotham is still finding its way with a few characters, namely on the good guys’ side, but Barbara is the one character that feels completely superfluous, and seems like a mere plot device. It seems like she only exists to be inevitably killed off in some dramatic way at some point, and viewers are bound to roll their eyes when Barbara saunters back into Gordon’s life with no motivation, again, over the coming weeks.

Given Barbara’s key role in Batman canon, it’s unlikely that Gotham would just write her out completely, so don’t kid yourself; She’s bound to be back.

At least the good is still outweighing the bad though, silly villain-of-the-week aside. Hopefully next week can get back to the better material that the show was on such a roll with though.