Another great guest star came to Brooklyn Nine-Nine this week for “USPIS”, even if the episode itself was only a slight improvement from last week’s especially shaky Thanksgiving episode, “Lockdown.” Ed Helms guest stars as U.S. Postal Investigation Service agent, Jack Danger (pronounced, “Dong-er”, much to Peralta’s disappointment), and makes for a highlight presence in a better, but still merely acceptable episode.

After Diaz’s task force discovers evidence that the Giggle Pig drug ring may be exploiting the U.S. Postal Service, Peralta and Boyle are forced to seek the help of Danger, a borderline delusional government bureaucrat who stretches the title of, “Federal Agent” as far as it could possibly go. Naturally, Peralta gets annoyed by Danger extremely quickly, and sidesteps Diaz’s orders to try and shut Danger out of the investigation. 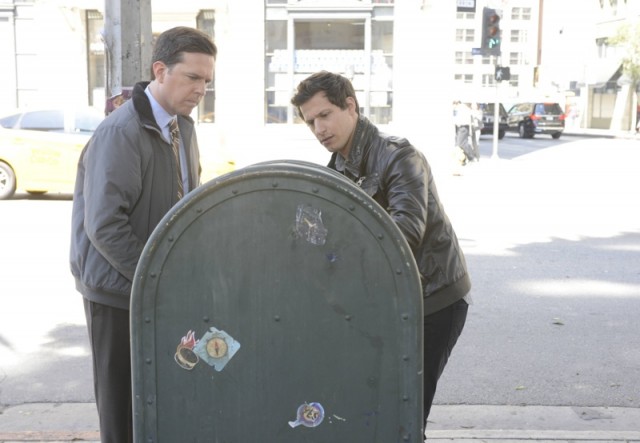 This part of the episode was inspired, since Peralta’s selfishness inevitably blows up in his face, and Diaz reprimands him for alienating the USPIS forces by not honouring Danger’s methods. This is another great touch on Peralta and Diaz having a long-time friendship from their time in the police academy, which the show brings up surprisingly rarely. Peralta does manage to make things right by the end of the episode, with both Danger and Diaz, but it was cool to see that Diaz is taking her authority over the task force seriously. It was also quite amusing when Danger tries to charge the secret drug deal with Peralta and Diaz’s squad, only to bang his head on the door and fall unconscious at the entrance. Federal agent, indeed…

Over on the B-plot, a bunch of simple silliness occurred as Santiago decided that she wanted to quit smoking. Yes, Santiago smokes, which has been hinted before, but never properly seen until now… Well, as much as network censors allow. This being a network sitcom, we haven’t seen much of Santiago’s filthy habit, a habit that does makes sense, given how high-strung she is. Sure, we don’t really see Melissa Fumero puff a drag, but the way that the show gets around this by showing the increasingly ludicrous (and obscured) ways that Santiago tries to lie about smoking is a clever way to get around the fact that characters can’t be seen actually smoking on network TV. 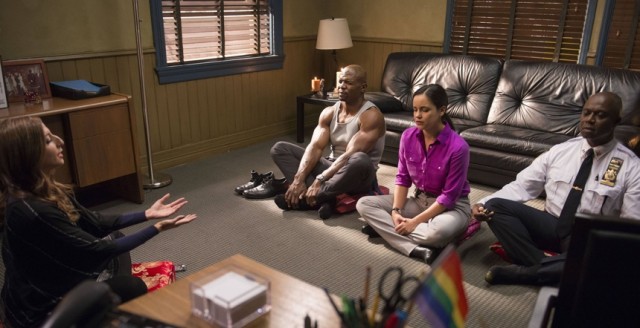 Regardless, this gave the rest of the precinct something to do, as Gina, Jeffords, and even Captain Holt tried their own unique ways of overcoming addiction. The sequence of Santiago and Jeffords dunking their head in ice water continually was a comedic highlight this week, as was Santiago initially being overjoyed at the chance to jog in the park with Holt, before Holt clarifies that they will jog in silence, and that music is a crutch that is used by the weak. Holt logic. Never fails.

The joke felt strained a bit by the time we got to Gina attempting a blatantly absurd meditation routine that was bound to fail (as much as it was oddly effective with Jeffords and Holt), but at least the diversion mostly proved to be a nice complement to the main shenanigans with Peralta, Boyle and Danger. It was also intriguing to see that Teddy apparently has a problem with Santiago’s secret smoking habit, suggesting that their relationship may be hitting a few rocks off-screen.

Unfortunately, “USPIS” didn’t end up having a whole lot of depth to it. The Danger plot was solid, and it’s the first time that the precinct has made headway with Giggle Pig, but there’s no way that they’ve come anywhere close to halting the drug at this point. Likewise, the B-plot with Santiago was decent, but simply amounted to forgettable gags, especially when Santiago didn’t appear to truly kick her addiction in the end, despite the best efforts of some of her colleagues.

At least Scully and Hitchcock are the smartest that they’ve been in a while this episode, tricking the other cops into giving $20 each to Scully for a fake birthday during the intro. This yet again suggests that Scully and Hitchcock are on some level aware of the fact that they’re the precinct’s whipping boys, and seeing them exploit it was kind of clever, even if it did lead to Scully mistaking a cup of thumbtacks for his actual cup of coffee. Baby steps I guess.

All in all though, the show can still do better than “USPIS.” It did the job this week, but the second season has definitely had a good chunk of noticeably better episodes too.

Brooklyn Nine-Nine 2.8: "USPIS" Review
"USPIS" delivered an acceptable count of laughs between a guest-starring Ed Helms and an amusing B-plot with Santiago, but the show can still do better.
THE GOOD STUFF
THE NOT-SO-GOOD STUFF
2014-11-24
76%Overall Score
Reader Rating: (0 Votes)
0%