The Flash deftly proved that it can juggle multiple villains in this week’s especially exciting episode, which presented an interesting new obstacle for Barry, while bringing a threat from Starling City to menace the CCPD.

This week’s metahuman is one that fans of the Flashpoint graphic novel should recognize, that being Farooq Gibran, a.k.a. DC’s Blackout! Possessing the ability to absorb and discharge electricity, Farooq is mutated in an accident that costs him the lives of the two friends that were with him, driving him more than a little batty, and driving him to try and take revenge on Harrison Wells over the particle accelerator accident.

What makes Farooq more interesting than being just another villain-of-the-week however is that he’s a villain more along the lines of Plastique, who is cursed with his powers, constantly needing to devour electricity to survive. This also has him feeding on the unique energy of The Flash (the first potential hint that the Speed Force may in fact exist in the DC Television Universe), which in turn makes Barry lose his speed. It’s yet another interesting twist on Barry having to accept potential limitations, even if it does ultimately amount to the same old, “Your powers only work when you believe in yourself” schtick, which live-action superhero media has been churning out again every so often since Spider-Man 2.

Even so, the episode featuring a de-powered Barry having to flee through a literally blacked out S.T.A.R. Labs alongside Wells, Cisco and Caitlin as they were all stalked by Blackout was very intense and cool, giving the show more of a horror vibe than it’s ever had before. Seeing the lot desperately try to restore Barry’s powers, with Blackout potentially around every corner was a great new spin on metahumans that continued to elevate Blackout above the show’s usual disposable antagonists.

Better still though is the fact that Girder got to improve (and redeem) himself a bit after being last week’s villain, when Wells takes the calculated risk of letting him out to fight Blackout and stall for time. This was another part of the episode that was very cool on multiple counts, since Girder ultimately dies trying to save Barry and co. (though not before a neat little super-powered melee between him and Blackout), and the S.T.A.R. Labs crew gets a taste of Wells’ more ruthless side, with Wells being aware that Girder would inevitably die in the battle against Blackout, and Wells sacrificing him anyway to use as a distraction to preserve Barry. It was a cold move, and another hint that Wells may not be a good guy when it comes down to it.

In fact, the ambiguity around Wells took another cool turn this week, as he used his hidden future technology to poke around about The Flash and his potential existence in the future. This seems to definitively prove that Wells is trying to keep Barry and The Flash from being erased from history, though the jury’s still out as to whether it’s for the greater good, or perhaps some twisted reasoning that we don’t know about. Regardless, Wells’ mystery remains compelling, and seeing him take a blood sample from the defeated Blackout at the end of the episode to see how he siphoned Barry’s powers was another delightfully sinister moment, again tipping the scales more towards Wells potentially being a threat more so than a true mentor, and being yet another big potential tease for Wells being a Reverse-Flash eventually.

The second villain of the episode wasn’t actually one that Barry ever encountered, beyond idly passing him in the halls of the CCPD precinct as he complimented Barry on his, “Timepiece.” Yes, the Clock King is back, complete with Robert Knepper reprising the role from Arrow, and for whatever reason, he’s been transferred to Central City. That was probably a bad idea though, as Clock King takes the precinct hostage, including Detective West and Iris, though Eddie manages to hide away undetected, managing to get a shot off before being wounded, though creating an opportunity for Iris to take Eddie’s gun under the guise of saying goodbye to her dying boyfriend. Don’t worry, Eddie is fine in the end though. In fact, we even get a pretty amusing sequence of him hyped up on some pretty potent painkillers!

The reason why having Clock King return for this episode worked so well was not only as a lead-in to next week’s crossover episodes between The Flash and Arrow, but also in showing that even without The Flash, some of these characters can hold their own. The combined efforts of Iris, Detective West and Eddie manage to save the day and subdue Clock King again, giving Iris yet another opportunity to take down a villain herself. This would seem to be the first instance of villains potentially being passed around between The Flash and Arrow, which has also been evidenced by the fact that Captain Boomerang is debuting on Arrow, despite normally being an enemy of The Flash in DC Comics. 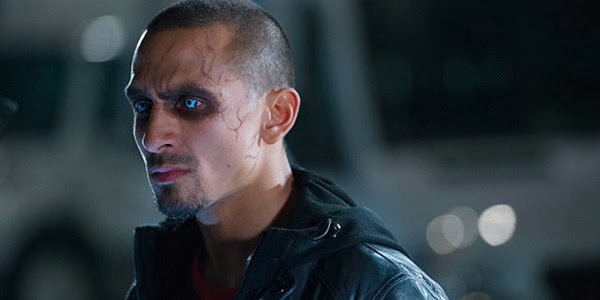 “Power Outage” was more solid entertainment for The Flash, with two equally effective villains and plots, and no shortage of fun moments. It’s a great appetizer for next week’s crossover episodes!