If this episode of Constantine seemed strange to fans, they’re right to be suspicious. While covering the episode, I had the sneaking suspicion that something wasn’t right with the timeline of events. Zed was inexplicably absent, Constantine and Chas seemed to forget the events of the past several episodes, and suddenly… It was Halloween? I felt like the episode was in the wrong place on the schedule…

Turns out, that’s exactly what happened. NBC later confirmed to some journalists that this week’s episode, “Rage of Caliban” was supposed to be the series’ second episode, and a Halloween special. That explains why it suddenly doesn’t have Zed, and doesn’t seem to reference what’s been going on over the past several weeks on the show. 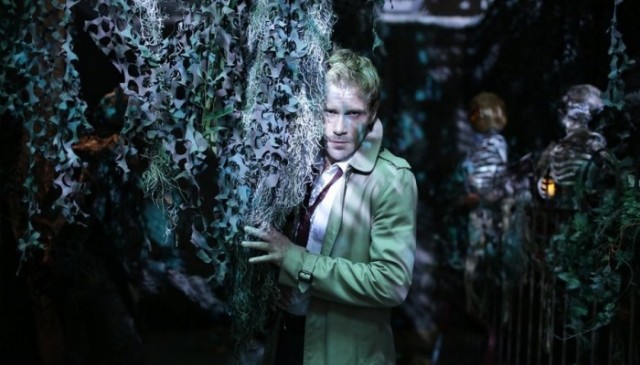 My best guess as to why NBC opted to push “Rage of Caliban” to the end of November in a rather random spot is because they wanted to introduce Zed earlier. It seems like it’s simply prolonging an issue though, and “Rage of Caliban” lost some of the positive momentum that Constantine has enjoyed over the past couple of weeks, namely with the superb episodes, “A Feast of Friends” and “Danse Vaudou.”

Thus, “Rage of Caliban” gave us another small-scale ghost story, and a somewhat trite one at that. A young boy is possessed by a vengeful spirit, and begins causing trouble. Naturally, it’s not as simple as Constantine and Chas approaching the parents involved and saying that they need to perform an exorcism. In fact, as Constantine later frankly tells the boy’s mother, she really doesn’t want an exorcism.

Naturally, the first half of the episode involves Constantine and Chas trying to find where the trouble is happening, after their convenient psychic map from Liv points them to their destination. The rest is a pretty by-the-book tale of a possessed child. The child is scared of the dark, then the parents assure him, then he seems fine, then trouble starts happening both at home and at school, but the parents don’t suspect anything, then the exorcist comes to warn them, then the exorcist gets thrown out, then the exorcist turns out to be right and has to fix everything, etc..etc.. You can see every plot development in “Rage of Caliban” coming from a mile away.

The familiar charm of Constantine himself at least elevates proceedings and keeps them interesting, particularly as the parents finally come to see that their child has been possessed. This leads to Constantine having to pursue the child through a haunted house on Halloween, which was quite an amusing irony.

The end twist of the episode was also quite cool, in that the soul that had possessed the child wasn’t really a ghost. Instead, it was the soul of a catatonic person that had fled the body and had begun wreaking havoc through other children, after the host child had his fingers chopped off with an axe by his abusive parents, whom he later ended up killing. It still seemed like a simple day at the office for Constantine and Chas though, even as Manny occasionally showed up to continue giving Constantine his own brand of mostly unhelpful advice, and continued warnings of the, “Rising darkness.” 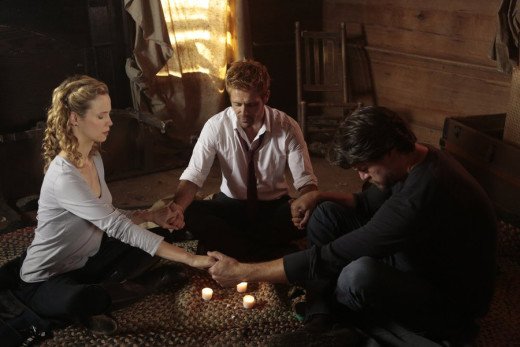 Now that she has been established, Zed’s presence was really missed this week. She would have been a great asset in this particular case, and it really feels like the show is missing something without her at this point. After last week’s episode gave us our best Zed material yet, it was very disappointing to just suddenly see her gone, even if it’s an expected side effect of this episode airing after it was originally intended to.

Ultimately, “Rage of Caliban” felt uninteresting and predictable, but it wasn’t without some fun moments. Hopefully the show gets back to its regularly scheduled plots next week though.

Constantine 1.6: "Rage of Caliban" Review
"Rage of Caliban" lost some of the show's positive momentum in airing out-of-order, with Zed being absent, and the plot being another by-the-book ghost removal.
THE GOOD STUFF
THE NOT-SO-GOOD STUFF
2014-11-29
73%Overall Score
Reader Rating: (0 Votes)
0%