Christopher Nolan’s latest movie, Interstellar has been quite a long time coming. While it is a fully original concept that both Nolan and his brother, Jonathan wrote together, the movie was actually originally put together for Steven Spielberg back almost a decade ago, where it was set up at Paramount. This aborted version of Interstellar would have been a more straightforward sci-fi blockbuster, but Spielberg aborting his Dreamworks studio’s deal with Paramount in 2009 as the movie struggled in turnaround, prevented this version from coming together.

Fortunately, the Nolans salvaged the project and led to Warner Bros. co-financing it, increasing Interstellar in scale and ambition, and giving us a sci-fi blockbuster on intellectual steroids. The result is the Nolans’ biggest movie to date, even out-classing the enormous scale of 2012’s The Dark Knight Rises, and an easy contender for 2014’s most ambitious movie concept, alongside Guardians of the Galaxy, X-Men: Days of Future Past and The Hobbit: The Battle of the Five Armies.

Interstellar is not a popcorn flick, to start. In fact, there are times where it’s dense to the point of being emotionally and intellectually impenetrable. On the bright side, it doesn’t babysit its audience, and expects the adult target audience to keep up with the abstract journey themselves, without every detail spoonfed to them. It makes for a consistently exciting and satisfying odyssey to the unknown, even if it does also feel a bit overlong and exhausting.

Plain and simply, this is a movie for movie lovers, who want the most out of a moviegoing experience at the theatre. Be sure you can handle the occasionally challenging journey before you apply, but if you’re looking to be impressed, Interstellar will certainly shatter your expectations.

Our lead in Interstellar is Cooper, played by Matthew McConaughey who, for whatever reason, never has his first name revealed. McConaughey is an excellent leading man too, remaining on a dramatic roll since Mud and Killer Joe, and True Detective if you want to count television. A satisfying everyman hero placed on an extraordinary journey across the universe, Cooper is a man of brutal honesty and more than a little skepticism. He’s not a chosen one destined to save the world. He’s simply the world’s best option.

As Cooper journeys to the stars, his daughter, Murph stays on Earth, living her life with her father away on a desperate quest, as the remaining humans face extinction. The father-daughter connection being uninhibited by space and time is one of the major themes in Interstellar as well, with Jessica Chastain portraying a grown-up Murph throughout much of the movie, as she tries to solve the riddle of saving humanity back on Earth proper. Working with Michael Caine’s elderly academic, Professor Brand, the movie shifts back and forth between Cooper and Murph, covering humanity’s struggle from both the explorers and the researchers’ perspectives.

There are many personalities at work throughout Interstellar, but it’s tough to go over many of them without giving away key plot points. Interstellar is the kind of movie where you’ll benefit most from going into it knowing as little as possible. Thus, I won’t strive to spoil anything and ruin the experience.

What I will say however is that the performances are universally excellent. As usual, Nolan gets tons of grounded, credible emotion out of the ensemble cast he’s assembled. The characters are deep and very well-written, simply being humans with their own individual struggles, insecurities and flaws. Nobody is good or bad, and for the most part, the movie doesn’t really have a villain, beyond the seemingly harsh circumstances facing humanity. Another theme thus explored by the characters is whether nature can be considered cruel or evil, or if humanity is yet another cosmic accident that is perpetually at the mercy of the universe around them.

From both sides, the crop blight pushes humanity, and brings out all sorts of hidden layers from every character. Some initially brave minds give up, while some initially cold hearts prove reliable. People are not so simply defined by one-note personality traits, and it’s great to see how effectively Interstellar creates a varied, complex set of personalities, without feeling like their characters are simply at the mercy of the unpredictable script.

It’s a shame that I can’t go into more detail about what makes the characters work so well, but I implore you to take my word for it. If you’ve seen any Christopher Nolan movie, you know that they can always be trusted to deliver standout performances and superbly satisfying character arcs.

Again, you’ll benefit most from the story of Interstellar when you don’t quite know what to expect from it. Even the marketing left most of the movie quite vague, so as to preserve the mystery that it wants its audience to share with the characters.

What I can reveal is this: It’s the future, and Earth has been reduced to a fully agrarian society due to the famine-spreading crop blight, meaning that everyone lives a farming-esque lifestyle. Corn has become the only source of food that survives crop blight at this point, but even corn will soon die, leaving humanity to starve and suffocate, facing worldwide extinction. In a last-ditch effort for survival, a former NASA pilot is enlisted to fly a spacecraft through a wormhole into the far reaches of the cosmos, in hopes of finding a new planet for humanity to live on.

The movie focuses on both Cooper’s crew’s journey into space, and Cooper’s daughter, Murph trying to save humanity from Earth itself, presenting two different sides to the extinction event. The rest is about enjoying the mystery, and pondering the implications of humanity’s place in the universe, all wrapped around an engaging and interesting sci-fi journey to the unknown.

Even if I can’t reveal the details of said journey, it’s a plenty fulfilling one, with astonishingly credible science when it comes to interstellar travel, relativity and cosmic phenomena. The intentionally long and exhausting odyssey won’t be for every kind of moviegoer, since you have to come into Interstellar with an open mind, loads of free time, and a sharp attention span. If you can do that though, Interstellar presents the kind of cinematic journey that few movies would ever dare to achieve, even if it can be a bit overwhelming in the process.

Christopher Nolan is one of the most talented, ambitious directors in the history of Hollywood, and he continues to impress here. Interstellar is clearly a labour of love for Nolan, who painstakingly crafts an extraordinary journey that nonetheless feels real and accessible. Everything is significant, and everything has its place in the grand scheme of a larger-than-life journey that redefines the idea of saving the world.

The kind of ambitious cinematography layered throughout the movie is absolutely unbelievable. There may be one or two scenes that stretch the otherwise excellent scientific logic to breaking point, but never to the point where it compromises the journey.

A handful of words don’t do the directing masterpiece of Interstellar justice, It is truly a movie that must be seen to be believed.

Interstellar is as much a masterwork of audio as it is in terms of visuals and story. Nolan’s usual composer, Hans Zimmer puts together the soundtrack, which thankfully chucks away the overdone strings and bombastic brass that most movie scores continually recycle. Instead, Zimmer makes a score that feels as empty and ominous, yet as strangely inviting as the events around the movie. The soundtrack feels surreal and alien, but in a compelling way. It really helps audiences mirror the journey of the characters.

Similarly excellent is the use of sound mixing and direction with the scenes of space travel. The way that the theatre shakes as spacecrafts take off and land through turbulent atmospheres is incredible, just as the exceptional use of muting and stretching audio bits helps to mimic the feeling of truly being on a spacefaring journey to the unknown.

Of the many reasons that Interstellar demands to be seen in theatres, this is perhaps the best of them.

Needless to say, Interstellar is an outstanding visual piece. The effects are not overblown, and are in fact, quite the opposite in many instances. Even as Cooper’s crew travels through wormholes and sees uncharted worlds, everything feels real. Yes, there’s no doubt plenty of CGI, but it’s not the kind of obnoxious CGI that needs to constantly beg for your attention. Not only that, but the grounded, believable set work is similarly commendable, helping to make the journey feel more real than making more CGI-heavy landscapes would have.

The visual directing in Interstellar is just absolutely sublime. Everything gets all the better in the IMAX cut as well, which you should absolutely shell out for if you have that option. The IMAX cut makes the already grand scale of the movie even grander, making the audio all the more immersive, and making the visuals all the more engrossing. This is the kind of movie that is made for IMAX screens, and while it’s perfectly enjoyable in standard digital screenings, the movie feels like it loses a bit of magic if you don’t opt for the IMAX cut.

Either way though, Interstellar resets the bar for visually-driven movies, and is a fantastic demonstration of being able to achieve incredible amounts of eye-catching power and atmosphere, even without an overabundance on over-active CGI.

Interstellar is almost impossible to adequately review, since there’s just so much to it, and so much of the movie is best enjoyed with viewers not really knowing what’s going to happen. Even when you’ve watched the movie and know all of the surprises though, Interstellar allows avid film enthusiasts to embrace repeat viewings, where they can continually appreciate the immense detail and ingenious direction that went into realizing a movie so large, and yet so seemingly real.

With all that said though, it must be repeated that Interstellar is not for everyone. It may be a masterpiece of filmmaking, but no matter how you slice it, it is a dense and occasionally overwrought journey that some audiences will find too demanding and impenetrable, not to mention that this beast is a true epic, being nearly three hours long. The science only becomes more abstract as the movie goes on as well, with a climax that skims the edge of credibility in favour of a more fantastical conclusion. It’s not a clean-cut Hollywood ending, but I will say that a lot of theoretical physics is just that, theoretical. Thus, not everyone is going to buy it. 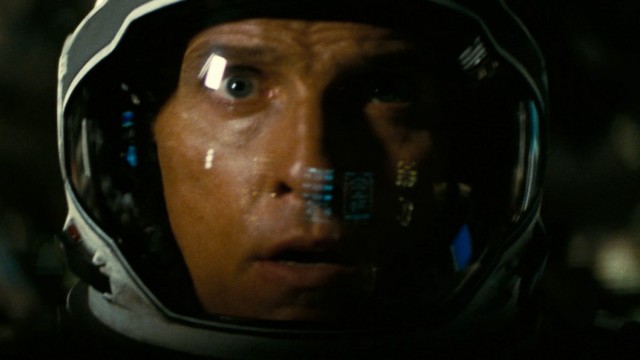 If you’re up for the imposing scale however, and are looking to enjoy a movie that deftly balances being art and entertainment, while challenging your imaginations and obliterating your expectations, Interstellar is arguably one of the most impressive cinematic feats you’ll experience all year. Hopefully you have a strong bladder though.

Interstellar Review
Interstellar is a masterpiece of sci-fi filmmaking, presenting a sublimely directed journey to the unknown that is a masterwork of both technical and narrative achievement, even if it can be a bit dense.
CHARACTERS95%
PLOT90%
DIRECTION100%
MUSIC & SOUNDTRACK95%
VISUAL EFFECTS95%
THE GOOD STUFF
THE NOT-SO-GOOD STUFF
2014-11-27
95%Overall Score
Reader Rating: (1 Vote)
100%