With Coulson’s crew gaining a lead on the race to the mysterious city, the groundwork was laid for what is sure to be an eventful Fall finale next week. Raina came back into play as a target of HYDRA, while Agent 33 resurfaced from a couple of episodes back, to eagerly lay the hurt on Coulson’s team.

In fact, the pace is really ramping up now. Skye proved she could hold her own against Agent 33, just as Raina was captured by S.H.I.E.L.D., only to have her and Skye recaptured by the end of the episode, with HYDRA conveniently getting a tracker on Raina just in time for the rest of the team to get on the path directly into the mysterious city.

“… Ye Who Enter Here” suffered a bit in terms of obviously being a foundation-laying episode for next week, but its many developments were still quite intriguing. It was also great to see the show finally just come out and admit that the blue aliens that they’ve been teasing this whole time are in fact the Kree, which most people would no doubt already be aware of after seeing Guardians of the Galaxy. Raina also explaining that her father knows Skye is worthy of touching The Diviner is another good development, which seems to lend further and further to the idea that Skye and Raina are in fact Inhumans, particularly when Raina alludes to her past as a, “Freak”, one that was adopted by Skye’s father early on.

As usual though, the show didn’t spend any time taking breaths. Even the Koenig brothers got in on the action, with Sam Koenig being another Patton Oswalt-approved addition to Coulson’s forces. Seriously, how many of these guys are there? The weird humour around the Koenig’s felt a bit strange in what’s been a darker and more aggressive second season for Agents of S.H.I.E.L.D., but at least Oswalt prevented things from getting too heavy.

Meanwhile, Coulson, Fitz, Simmons, Bobbi and Mac decided to brave the path to the city themselves. Fitz and Simmons continue to display an effectively strained new dynamic, particularly after Fitz’s heartbreaking revelation that he is quitting the lab to work as a mechanic with Mac. Equally emotional was Simmons admitting aloud that she never saw Fitz as anything more than her best friend, despite Fitz declaring his love for her before getting his brain damaged during the Season One finale. It will be interesting to see how the two work things out down the line, but that probably won’t happen until after the race to the city is over. 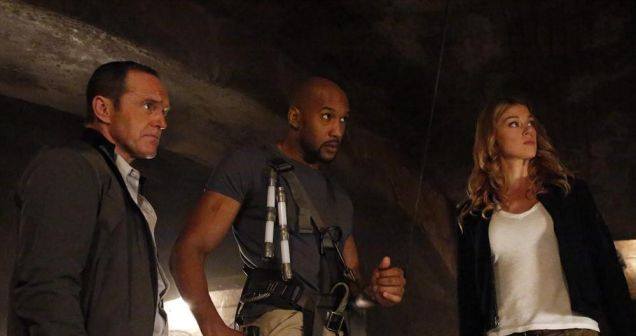 Speaking of the city, another interesting new hazard came up, as Mac touches the ground after being lowered into a dark pit (the predictably ominous kind), and flies into some kind of berserk rage. It’s unknown what caused this effect, especially when Icer bullets suddenly no longer worked on him, though it was a big moment to see Fitz pointing a real gun at his friend, threatening to kill him. Bobbi ended up subduing Mac with some high voltage to the neck with her batons, though this did lead to him tumbling all the way down the deep hole that they initially lowered him into. Does this mean Mac is dead? It sure looks that way, though we may learn more next week.

Meanwhile, Ward has officially begun his partnership with Whitehall, being the one to get The Bus surrounded, and take Raina and Skye hostage. Ward’s intentions are still vague and unclear, though this begs another question about his desire to leave Skye unharmed. Could it be that Ward somehow knows something about Skye’s value to HYDRA as someone who can apparently touch The Diviner? It would explain why he insists on taking Raina alive as well. Again, it’s just more that we’ll have to wait for next week.

So, everything ended with the crew appearing to be one man down, yet right at the doorstep of the mysterious location they’ve been seeking. Meanwhile, Skye and Raina have been taken by HYDRA, leaving May and Hunter to figure out their next move, particularly as the episode ends with Whitehall ordering The Bus to be shot down, betraying the deal that he made through Ward in true HYDRA fashion. Uh oh. What now? 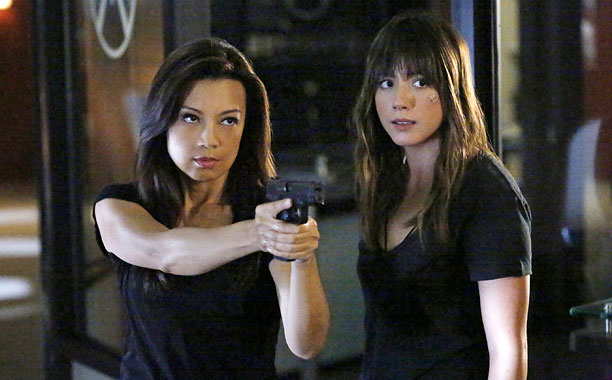 Yet again though, it’s just more setup for the Fall finale, and that was the primary function of this episode. There wasn’t any real sense of resolution, even if there was some solid thrills, and a great fight between Skye and Agent 33 earlier on. Hopefully, all of this setup pays off in a big way next week, as we hopefully get our first look at just what is so precious to S.H.I.E.L.D. and HYDRA.