NOTE: Full spoilers for this crossover episode of The Flash are present in this review.

The first of two crossover episodes between The Flash and Arrow has aired. The crossover episode for The Flash, “Flash vs. Arrow”, has Oliver Queen and his crew come to Central City to seek the help of Barry and S.T.A.R. Labs in their investigation of the mysterious boomerang that was found as a murder weapon at the conclusion of the previous Arrow episode, “Draw Back Your Bow.”

Seizing the opportunity to work with the vigilante he views as his mentor, Barry tries to enlist Oliver’s help in apprehending his latest metahuman menace, Roy Bivolo, a man with the power to draw out suppressed negative emotion, a skill he has used to rob banks. Since Oliver finds Barry’s methods to be sloppy and unrefined however, he tries to train Barry to be a more efficient crimefighter, which, naturally, doesn’t go as planned. 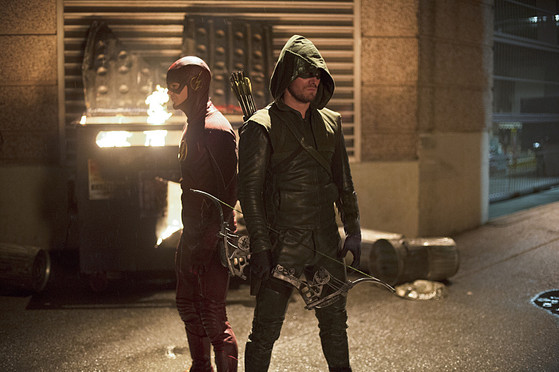 Obviously, a big highlight this episode is seeing how folks beyond Starling City perceive The Arrow and his actions. Seeing little moments like Iris having a longtime crush on Oliver Queen, and both Detective West and Harrison Wells trying to explain to Barry why Oliver’s vision of justice is rough and terror-based, is interesting, and helps to reinterpret the familiar personalities from Arrow. Equally appealing is seeing funny moments like Diggle’s first awed reaction and subsequent attempts to process Barry’s super-speed, and Oliver exploiting Barry’s fast healing to increase the roughness of his training regiment.

The episode took the opportunity to have fans’ debate for them between Barry’s supporting team and Oliver’s as they worked together to fix the situation with Bivolo, who was code-named ‘Prism’ for some reason, despite having nothing to do with that rather obscure DC character, and only once having his proper name from DC Comics, ‘Rainbow Raider’, suggested by Caitlin at the end of the episode, which Cisco says is a stupid name. Go figure. Barry’s crew argues that Barry is more capable and outwardly good-hearted and clean than Oliver is, while Oliver’s crew argues that experience, strategy and refined skill are more effective when it comes to heroics. It’s an interesting debate with no right answer, and it’s a shame that it was just kind of thrown into the episode to be rushed through for want of pacing.

In fact, the most disappointing element of what was otherwise a great first crossover episode for The Flash, is the fact that it might have benefited more from being a two-hour episode, instead of just a one-hour episode like usual. The pace of the episode felt very hurried, as the showrunners tried to cram in all of what fans would expect for the first union between The Flash and Arrow. This led to yet another underdeveloped, shallow villain in Rainbow Raider (no, he’s not Prism!), even if it was a decently executed excuse to have Barry and Oliver actually square off against each other, as the title teases. Barry and Oliver even apprehend Rainbow Raider completely off-screen after the fact, which was easily the biggest disappointment of the episode.

As for the fight between The Flash and The Arrow that people came for though, it doesn’t disappoint, with Barry getting into a rage fit after Rainbow Raider brings out the rage of The Flash, leaving Oliver as the only person with a chance of subduing him. The confrontation between Barry and Oliver is remarkably well-done, lasting just the right amount of time, and incorporating all sorts of cool fighting moves and tactics from both parties. It’s worth any other small gripes that the episode has. Inevitably, the duel does end in a draw, as The CW and DC naturally want you to tune into both shows, and not suggest that one hero is any better or worse than the other. The Flash and The Arrow are ultimately two different heroes with two different ways of doing things, and both are well worth enjoying, whether together or separately.

A surprising plus of this episode also came from Eddie, who is finally getting a proper character arc, after spending virtually the entire series at this point as a benchwarmer that’s simply doing what the script demands. Eddie has decided that The Flash is a potential menace to the city, and it’s revealed that he’s unhappy about Iris blogging about Barry’s exploits. Eddie tries to petition a task force to stop The Flash, only to get turned down by his captain several times. After Barry inadvertently badly injures Eddie during his rage fit however, Eddie gets the justification he needs for the task force, and has every reason to view The Flash as a bad, dangerous man.

This finally seems to lay the groundwork for Eddie becoming a foil and obstacle for Barry in an interesting, effective way. The subtle line from Iris shortly before Barry attacks Eddie, where she claims that Eddie is more like The Flash than he realizes, is also a very clever nod to Eddie likely becoming Flash arch-nemesis, Professor Zoom down the line, if DC Comics canon is any indication. I don’t know if yet more Barry/Iris drama was necessary, with Iris telling The Flash to go away and never contact her again after his actions, even after he explains what happened with Rainbow Raider. That seems a bit excessive on Iris’s part, especially since she’s spent so much time blindly defending The Flash up to that point.

In fact, after Harrison Wells and Detective West both claim that The Arrow is a bad, violent man themselves, they come around pretty quickly, even if Oliver was ultimately the reason they could bring Barry under control. It seemed a little too easy, and that was another side effect of the crossover’s rushed pacing. Fortunately though, this inevitably won’t be the last time that Oliver’s crew visits Central City, so maybe we’ll get more interesting and in-depth character conflicts down the line.

Oh, and on one last note, the epilogue that gave us our first look at a very-much-alive Ronnie Raymond, threatening a couple of muggers with his new nuclear-powered fire abilities, was very exciting! Seeing as Felicity outwardly implied that Caitlin is developing feelings for Barry this episode, it will be interesting to see how that develops, after Ronnie inevitably makes his way back to S.T.A.R. Labs at some point.

“Flash vs. Arrow” was plenty entertaining, even if it’s certainly not the best episode of The Flash to date. We’ll see how the second crossover stacks up soon, as Arrow will be imminently wrapping up the story of the boomerang and its wielder.

The Flash 1.8 Crossover Review: "Flash vs. Arrow"
Team Arrow's first trip to Central City was a mostly successful one, presenting a great duel between The Flash and The Arrow, and some interesting, albeit underdeveloped debates between the two's separate styles of heroics.
THE GOOD STUFF
THE NOT-SO-GOOD STUFF
2014-12-03
84%Overall Score
Reader Rating: (0 Votes)
0%